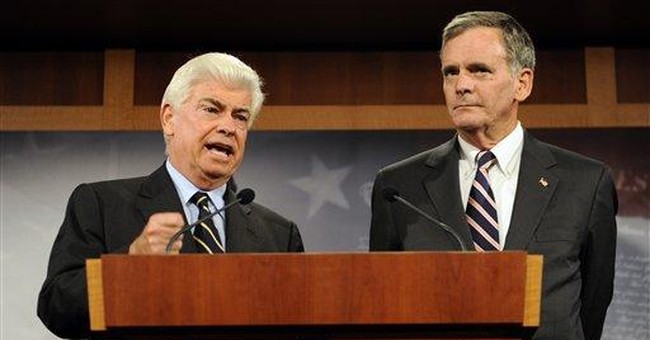 "John, you should do a story on the Whole Foods/Wild Oats merger and the FTC's continued bizarre bullying of us over a year after we completed the merger. Is Whole Foods a monopoly? The answer is obvious to everyone with common sense: "Of course not!" We are less than 1 percent of the retail food market in the USA and less than 10 percent of the organic foods market. No one is compelled to shop at any of our stores, and our competition is everywhere."

That's the start of an angry email I got recently from John Mackey, Whole Foods CEO. I don't know the intricacies of antitrust law or the secrets of this case, but I think Mackey has a point.

Outside the Federal Trade Commission building in Washington, D.C., twin sculptures sum up the government's attitude toward economic freedom. They depict a muscular figure heroically holding back a wild horse that presumably would wreak havoc if let loose. The title is "Man Controlling Trade."

How typical of government. Trade is an activity in which two people realize mutual gains through voluntary exchange. It's win-win -- or else it doesn't occur. Commerce is cooperation. It's the essence of civilization.

Yet the FTC likens trade to a wild animal that someone -- government, of course -- must control.

I thought the Microsoft prosecution was just the usual excesses of regulation-loving Democrats, but apparently not. Even with Republicans in charge, bureaucrats bully businesses.

A year ago, the FTC ordered Whole Foods to stop its merger with Wild Oats Markets. A federal judge refused to go along, and the merger was completed. This summer, however, an appeals court reversed that judge, and now the FTC has reopened its case.

The FTC believes that since "Whole Foods and Wild Oats [were] each other's closest competitors in premium natural and organic supermarkets," the merger means "higher prices, reduced quality and fewer choices for consumers."

But why do the bureaucrats look only at Wild Oats? The supermarket industry is crowded. Even the submarket for natural and organic foods has vigorous competition.

I understand why people think antitrust law is necessary. They fear that businesses will collude to raise prices. But if the government has not created barriers to entry, even a lone seller of a product can't charge whatever he wants because unwarranted high prices and profits will draw competition. What counts is not the number of firms in a market but the potential for competition.

The only "antitrust" policy we need is repeal of all government barriers to entry. Government can't assure competition. Competition happens when government stays out of the way.

The FTC lawyers believe that the Whole Foods-Wild Oats merger is costly to consumers. But they seem oblivious to the costs their own policies impose. As Mackey told me:

"Whole Foods has now spent over $35 million in legal expenses battling the FTC ... We do not know how much of taxpayers' money the FTC has wasted. With the FTC continuing to bring anti-trust actions, we will spends tens of millions in additional legal expenses and waste enormous management time dealing with the FTC instead of creating value for our customers.

"This thing will now likely drag on for many years into the future before all the legal options are exhausted by both sides."

Taxpayers and consumers will pick up that tab, just as they did when the Justice Department spent 13 years prosecuting IBM, before finally dropping monopoly charges in 1982. What a waste of time and money. If IBM had monopoly power, why wasn't it able to dominate the PC market? And why is it now smaller than Microsoft?

The problem Mackey cites goes beyond the FTC. Despite media talk about the Bush administration's "handcuffing" regulatory agencies, regulators pass more rules and file more lawsuits every month. After all, they're regulators. If they're don't regulate, they're not doing their job.

Now that the media is screaming "economic crisis" and politicians of both parties are bashing business, I assume we'll see even more destructive regulation.

If America's professional bureaucrats have their way, they will regulate until they kill off just about everything America creates.