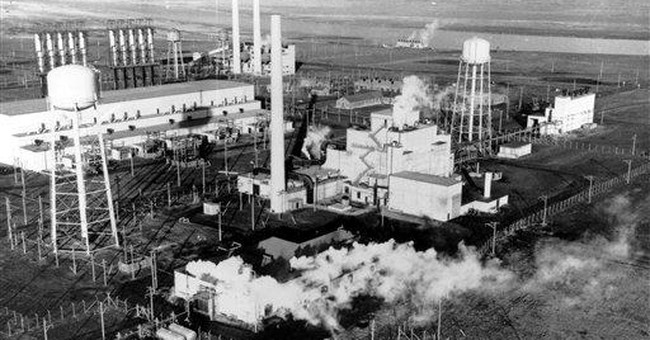 "John Stossel sounds like a real defeatist. ... We have our backs to the wall, and he's raising the white flag."

"Stossel has lost his mind."

I argued that "independence," a favorite slogan of vote-hungry politicians, would require the government to interfere with the global division of labor, which, as economists have understood since Adam Smith's day, make us richer and therefore better able to deal with the future uncertainties. "It is the maxim of every prudent master of a family, never to attempt to make at home what it will cost him more to make than to buy. ... If a foreign country can supply us with a commodity cheaper than we ourselves can make it, better buy it of them," wrote Smith.

Of course, as many readers noted, the federal government, by doing things like prohibiting drilling in on- and off-shore areas that may have oil reserves, makes it more expensive or even impossible to produce energy in this country. Those policies should go, but that would still not bring self-sufficiency. Our demand for oil is too great.

And anyway, if the economics of oil production favor foreign over domestic producers, it still makes sense to buy the cheaper product. It wouldn't matter how much shale oil we have in the United States.

Readers correctly point out that because governments control much oil production, there is no global free market. But it does not follow that market forces don't work. There are many sources of oil in the world and many buyers. Supply and demand still set the price globally. It is foolish not to buy at the lowest price.

Many readers agreed with the one who said: "The short-term goal here is not complete energy independence. ... The goal is partial independence from those countries, many of whose citizens hate us and would do us harm."

"Partial independence" sounds like partial pregnancy. People don't have to like each other to benefit from trade. Those who sell us oil need the money so they can turn it into food, automobiles and other things. Refusing to sell because they don't like us would be self-destructive. Anyway, all the world's oil ends up in the same bathtub. If one foreign source stopped selling oil to the United States, it would sell to someone else, and that buyer would then have an incentive to sell to us.

Several readers argued that "Energy independence doesn't mean opposition to trade. If we ever become energy independent, we'll still have the option of buying energy on the world market."

Of course. But this misses the bigger point. To even attempt to achieve energy independence, the government will have to plan the energy sector. Considering how pervasive energy is throughout the economy, this is a recipe for full central planning and a step toward poverty and tyranny.

"Why not keep all that $720 billion [we spend to import oil] in the United States of America?" was a sentiment expressed by many. But that reveals a poor understanding of world trade. When we trade dollars to foreigners for oil, they have to do something with those dollars. They don't stuff them in mattresses. (If they did, it would mean we got free oil.) They buy American products. (U.S. exports are soaring.) Or they invest in businesses here. Or they sell the dollars to someone else who buys American products or invests in the United States.

If we stop buying from abroad, foreigners will have fewer dollars with which to buy American products or to invest. That would hurt us.

Many readers think that energy independence would produce jobs for Americans. But the idea that money spent abroad means fewer jobs here is just plain wrong. If Americans don't produce energy, they will produce something else. The number of jobs is not fixed. There is always work to do.

If Americans can produce competitive forms of energy -- without government subsidies -- great! But if others can produce energy more cheaply, we'd be crazy not to buy it and use the savings to make other things to improve our lives.