John R. Lott, Jr.
|
Posted: Oct 07, 2018 12:01 AM
Share   Tweet
The opinions expressed by columnists are their own and do not necessarily represent the views of Townhall.com. 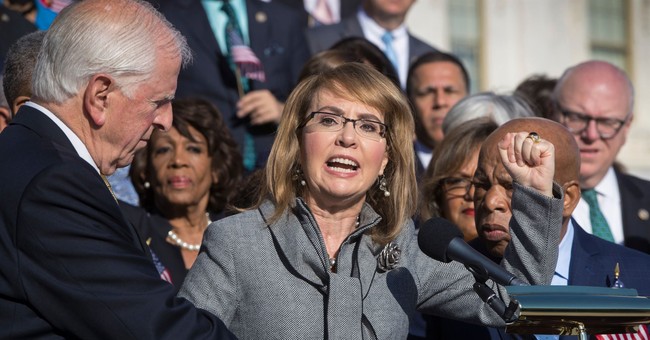 Gun control advocates are again spending massive amounts of money on political campaigns this fall. Michael Bloomberg has promised $80 million to flip control of Congress to the Democrats. Gabby Giffords’ gun control organization is pouring a million dollars or more into each of a dozen congressional races. Everytown for Gun Safety is spending $5 million on 15 House races.

With a net worth of $56 billion, Bloomberg is unlikely to miss a mere $80 million. But many Republicans are finding themselves completely financially outmatched.

Gun control advocates’ No. 1 target right now is first-term incumbent Jason Lewis (R) of Minnesota’s Second Congressional district. His $1.36 million in the bank is matched just by Giffords’ gun control organization, which is putting $1.3 million into the race against him. And Lewis’ Democrat opponent, Angie Craig, has $1.7 million in the bank.

The gun control groups are the ones with the big dollars.  According to OpenSecrets.org, the NRA has donated $695,968 to candidates running for the House and Senate in the 2017-18 congressional cycle.  Outside spending to help federal candidates amounted to another $2.7 million. The NRA total comes to $3.4 million, and it is the only significant fundraising from a pro-gun group. It is once again dwarfed by spending from gun control advocates.

Ironically, while gun control organizations and Angie Craig are attacking Lewis for taking a total of $8,450 from the NRA in 2016 and 2018, the $1.3 million being spent by Giffords for Craig is more than 150 times greater.

Lewis hasn’t sponsored a single pro-gun bill in the less than two years that he has been in Congress. Instead he has largely focused on bi-partisan issues. He co-sponsored reforming the Juvenile Justice and Delinquency Prevention Act with Virginia Democrat Bobby Scott. It passed the House unanimously. His bills on studying Opioid addiction, standardizing drone regulations, and infrastructure spending have also drawn Democratic co-sponsors.

But the dishonest ads just keep coming. Last week, a Giffords PAC ad claimed that Lewis “voted to allow guns in our communities” and “opposes background checks for guns.” Lewis did vote for the Concealed Carry Reciprocity Act, but the act also included a bill to expand background checks on guns. The bill passed the House with bi-partisan support.

Concealed carry reciprocity would require concealed handgun licenses to be honored in all 50 states -- just like driver’s licenses. Permit holders would still have to obey the laws of the states that they travel in.

Reciprocity already exists in most of the country.  The average state allows permit holders from 32 other states to travel freely. Eighteen states (including Ohio, Indiana, and Virginia) honor permits from either 48 or 49 other states. This policy hasn't caused any problems. Not surprisingly, a 2016 survey of the National Association of Chiefs of Police found 86% support for nationwide reciprocity.

When a woman drives across the country by herself, should she be able to carry her permitted concealed handgun for protection?  Should a truck driver be able to protect his valuable cargo? Concealed carry makes people safer.

Gun control advocates warned Minnesotans that right-to-carry laws would lead to disaster. But permit holders have turned out to be extremely law-abiding. Seven percent of Minnesota adults have concealed handgun permits, and from 2010 to 2015 not a single permit holder was convicted of any type of assault. The experience has been no different with permit holders who have out-of-state licenses.

The Giffords ad also accuses Lewis of voting to “roll back restrictions on gun purchases by those deemed mentally unfit.” But under new Obama administration rules, some 4.2 million Social Security recipients were almost banned from owning guns simply because they had trouble managing their finances. This constitutes about 10 percent of all people 65 and older. But it’s not clear what finances have to do with a person's right to defend himself. Women and senior citizens stand to benefit the most from owning a gun because they are unlikely to be as strong as an assailant.

Do Minnesotans really want a radical congresswoman who really thinks that people who get help with their finances are mentally ill?

The Gifford’s PAC ad calls Lewis a “Washington Politician,” but he is anything but a career politician. He only got to Washington last year at the age of 61, and had never held political office. Before that, he hosted a popular radio show for 20 years.

It’s pretty shameless when the first sentence in an ad goes against the obvious facts. The rest of the ad goes downhill from there.