Not the Prophet of Peace, May Peace be Upon Him (*sarc font) 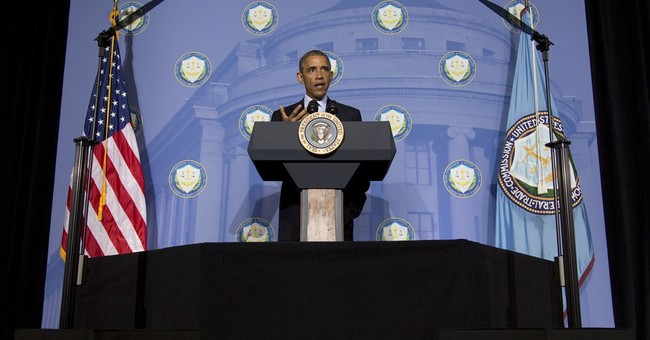 But I was wrong.

Europe now understands what the rest of us have known for a long time: Obama is essentially a silly man, who in the grand scheme doesn’t understand the role of an American president.

We here in America understand now just exactly how far we have to go to get the White House to admit they are wrong about something, anything.

That distance apparently is measured between here and somewhere, anywhere, in Europe.

Yes, where the voters here in the US have tried and failed over several election cycles to get Obama to see the error of his ways, to get him to admit that ANYTHING is his fault, it only took the unified intelligensia of Europe half a day to get the White House to back track on their recent “blame someone else” tour.

Just to recap: Paris hosted an unusual outpouring of sympathy against radical Islamic terror, joined by Israel’s Benjamin Netanyahu, Egypt’s foreign minister, King Abdullah of Jordan, plus a cast of every western leader, all there to condemn Islamic violence.

And somehow Obama forgot to go.

He watched football at home even though his girlfriend, Danish Prime Minister Helle Thorning-Schmidt, was there doing her Europey thing with the rest of them.

Obama instead did a drive by at the French Embassy; he signed the guest book and I suppose, just to make his contempt clear, he dropped off a bottle of California wine and some Wisconsin cheddar.

At first the administration tried to blame others for quibbling with the snub, but then simply caved quicker the French on the Maginot Line.

But what really stung the administration was the criticism from Europe.

When was the White House ever worried about what Ted Cruz had to say?

Lest we forget, someone with a higher profile was in Paris at the time, too.

Attorney General Eric Holder was there, but declined to attend the rally.

Perhaps Holder felt that the French already had the “Don’t shoot, we surrender thing” down pat, so his work there would just be repetitious.

Remember: This is an administration that with their usual precision timing has spent the last several months at home lecturing police, whites, the media and anyone else stupid enough to listen that our biggest pressing problem domestically is too frequent policing at the expense of black males.

Holder even started federal investigations of fairly adjudicated grand juries, grand juries in New York and Missouri that met not in 1957, but in 2014.

And the administration kept it up right up to the moment that Ismaaiyl Brinsley, Muslim and crazy, peace be upon him (*sarc font), manically killed two cops in the name of the Prophet—and by that I mean Obama, not Mohammed.

Mohammed was busy apparently on the cover of Charlie Hebdo in Paris at the time, so he, peace be upon him (*sarc font), has an alibi.

And thus Europe found out what many Americans will never admit.

There really is no alibi for Obama. He is not the Prophet of Peace.

And I never thought I’d live to see that admission.

Not from Europe anyway.