Too Many to Kill—Even for Us 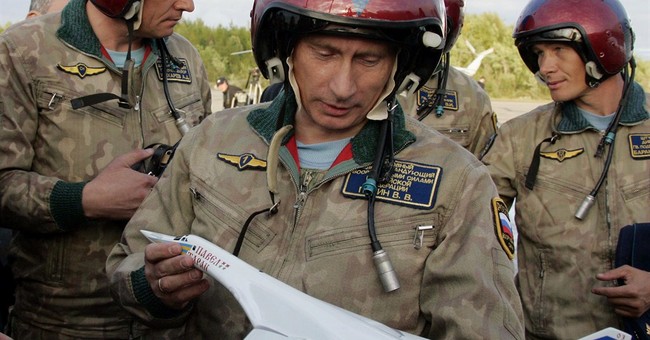 Throughout history dictators, monarchs and other absolutists have enjoyed very little security. Few die peacefully in their bed. More often than not they are removed by forces either internally or externally in ways not pleasant.

Vladimir Putin today is trying to consolidate his position in Russia, which is hardly unassailable, but has been made stronger through the ineffectual counter moves of leaders in the West.

“It is astounding how easy democracies make it for us to reach our goal,” Hitler said about Neville Chamberlain and England in the 1930s.

Had the “democracies” stood up to Hitler before he had a chance to consolidate his power inside of Germany—say at Czechoslovakia—it’s likely that the generals inside Hitler’s Germany would have put a stop to his dictatorship.

But as victory piled up over victory, some diplomatic, others military, Hitler’s position became unassailable.

This is exactly the situation Vladimir Putin finds himself in.

Putin is adept at the political thrust and parry required to wield power in the Kremlin. As an internal security officer in the KGB, he rooted out dissent, amassed power and played the game well. As Colonel Sergei Tretyakov, a defector to the United States made clear in Pete Early’s book Comrade J, Putin and the men around him have no problem using murder against opponents both in Russia and on foreign soil, not in the pursuit of defense or forgone policy, but as a political weapon.

That there are forces in Russia today that still oppose Putin is only due to logistical considerations: As the now-head of Putin’s personal security forces, General Viktor Vasilyevich Zolotov explained after making up a list of potential assassination targets to dispose of politically “There are just too many. It’s too many to kill—even for us.”

Zolotov is important because there is speculation that Russia’s interior minister, responsible for state security, Vladimir Kolokoltsev, is or was on the chopping block.

Zolotov has been suggested as a replacement.

“Rumors that Kolokoltsev has been forced to resign first appeared Oct. 29 on Russia's Dozhd (Rain) television,” writes Stratfor, “and were picked up by Pravda, RIA Novosti and other Russian media outlets before becoming a topic of chatter for Russian pundits. Dozhd cited sources within the Defense Ministry, though the exact status of Kolokoltsev's position was not made clear.”

Since Kolokoltsev has appeared in public in his official capacity, he remains in place—for now, while Zolotov waits in the wings. But the mere mention of dissention at the top is an indication that Putin is: 1) not entirely secure; and 2) looking to further consolidate his power.

While Putin’s popularity has never been greater than it is right now thanks to his “Democratic” opponents helping him regain his balance after the blunder in Ukraine, power in Russia does not reside with the voters.

And although the sanctions against Russia are hurting the economy there, unless there is some viable alternative to Putin, his position is becoming stronger every day. The Russian economy eked out a gain of 0.7% in the latest quarter, which is more than twice the expectations of economists. And then there is China.

China is more than willing to play banker to Putin, to some extent making up for Western sanctions.

Today, it is clear, the U.S. is the main opponent for China, not Russia.

Historically, both Russia and China have shown a willingness to cooperate to further their own aims.

So while it’s not entirely accurate to paint the picture of Putin as a latter day Hitler or Stalin, it’s entirely plausible to see in him a little of both men.

Both men came to power incrementally because those in a position to stop them frankly failed to.

The fault in those cases certainly was internal, yet the forces of freedom could have helped themselves by effectual resistance.  In today’s instance it is also the fault of the “Democracies,” who do not lack the ability to stop Putin. They only lack the will.

History, as Mark Twain noted, never repeats itself, but it sure does rhyme.