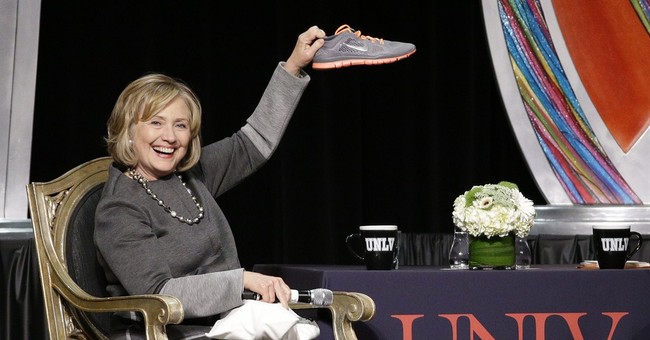 NRMLUNIT wrote: JR, running out of things to complain about. 55 months of jobs added, unemployment below 6%. Just keeps getting worse, day after day, after day, for JR. – Who Needs Work When We Have Obama?

Not really. It’s getting mildly better for some in this economy, but the vast majority has been left behind. Even usually reliable Obama apologists have admitted this.

“In remarks prepared for delivery to a conference on workforce development, [Atlanta Fed President] Dennis Lockhart said there was likely to be some reduction in the use of part-time workers as the economy strengthens further, but probably not to levels seen before the recession,” according to Reuters.

"In other words, preference for part-time workers is likely to persist," he said.

"For Fed policy purposes, the balance of evidence suggests the labor market is still far from normal, even if normal is not what it used to be."

To translate for the liberally-impaired: “Things are not even as good as the lowered expectations we have come share for this administration would allow.”

This “part-time workforce” phenomenon is wholly attributable to Obamacare, and its provision that defines full-time employment as 29 hours per week.

But even getting past the huge number of part-time workers, labor participation rates are at all time lows, meaning the labor force is smaller than it should be.

Anyone can bring the unemployment rate down by getting workers to get out of the workforce, as Obama has done. Under Bush, workforce participation went up and unemployment went to record lows twice.

If we look at how many discouraged workers and part time workers who want full time work, unemployment and under employment is around 23 percent. And it hasn’t moved much in four years although the composition has chnaged.

Why is it significant? Because it means that workers aren't producing stuff.

Essentially about 4-5 percent of the workforce is now on the sidelines that shouldn't be.

There are about 250 million people available to work. That means about 12 million workers are sidelined. Multiplied by an average wage of $45,000 that’s $540,000,000,000 missing from the economy just in wages. Since labor accounts for about 45 percent of GDP that means that the full effect of these missing workers is over a trillion dollars in GDP. Actually, $1.2 trillion to be exact.

That’s like subtracting a state the size of New York from our economy. Every Year.

And you call that progress?

That is why the American people are so upset with progressives like you and Obama.

According to an average from Real Clear Politics, Obama continues to fall in the polls, with an expanding gap between lowered approval ratings and and higher disapproval ratings. Somewhere around 40 percent approve of the job Obama has done on the economy.

So, dear comrade, perhaps you should be a tad more realistic about the devastating consequences that Obama has had on the economy.

It’s almost impossible to over estimate how much responsibility he has for the poor state of our country. And people are paying attention. I mean people besides you.

That’s why unemployment was so low under George W. Bush, twice.

Bush inherited a recession from the Clinton administration yet weathered that and the 9/11 attacks to bring unemployment down to 4.4 percent, a figure so low that some economists did not believe it was possible previously.

He inherited the dotcom bubble. From 2000 to 2002, according to the LA Times, tech companies lost $5 trillion in market capitalization, or about a third of our current GDP.

Plus Bush had to deal with the wholesale shutdown of not just a few days of government, but of the entire country, including our stock markets after 9/11.

Homernods wrote: Stop being cute Ransom and write some facts that are not available, such as how much money is being borrowed, not printed, to cover the cost of socialism. I heard, barely, that it is two trillion per year range. Not too long ago, we were hearing our creditors were going to stop the loans. The point here is that no gravy train has an endless supply of fuel. Sooner or later, this welfare ' system ' must implode on itself. - Who Needs Work When We Have Obama?

Come on: I couldn’t stop being cute even if I wanted to.

NRMLUNIT wrote: Energy- We are at the lowest import level EVER
Healthcare- Obama is the only one to EVER do anything about it. 1 year later it's doing better and,getting better all the time.I wonder what will be said next year,nothing?
Banking- The ones who created the mess aren't quite so free to do the same thing again.
Success- Stock market and, everything else has improved, looks like that will continue in the near future. 55 months straight adding jobs and more to come. This is so easy. - You Can't Teach Liberals Anything

If liberalism isn’t a mental disease, it at least is a personality disorder.

1) Energy is being imported at lower rates DESPITE Obama, not because of him.

Yes, or no? Do you support fracking or not?

It’s fracking that has brought imported oil to lower levels, not Obama. In fact, now that oil prices have come down, oil rigs will shut down here because they have to rely on trains -- rather than a pipeline-- which boosts the price by $10 or more per barrel. Not as consequential when oil prices are $110 per barrel, but pivotal at $70-$80 a barrel. If you like oil imports being low tell your messiah to make like Moses and signed the law approving the Keystone Pipeline. Case close

2) Healthcare sucks. No Democrats in competitive districts are running on Obamacare…just a fact. Whatever you call Obamacare, it’s not reform. It’s more expensive than as touted, it’s more regressive, and it essentially has Sovietized our healthcare system. Only 15 percent of voters want it left in place as it is.

3) Banking is worse than it was previously. It’s not just me saying this.

As Frank now admits, the government's fingerprints were all over the financial crisis. Dodd-Frank reform was supposed to fix it, but as Bernanke shows, it didn't.

Again, whatever else Obama wanted to do with Dodd-Frank banking laws, it wasn’t reform.

Too Big to Fail or Jail is alive and well under Obama and the financial system. In fact, the banks are bigger with more concentrated assets than ever before. And the government is still pressuring banks to make bad loans.

If we had the same type of financial crisis today, say in the stock market, that we had in 2008 the government would have to bail out the banks again.

ericynot1 wrote: I see our host has once again fired up the Wayback Machine. Perhaps he should change his name to Rocky Ransom :) Do you suppose they actually pay him to do this? - You Can't Teach Liberals Anything

mjefferson wrote: I read part of your column - the beginning - but it was too long to complete it. I just had to respond to what you said about teachers. Teachers get a lot of blame for what is going on in education today.-You Can't Teach Liberals Anything

The only assignment you had was to read the entire article. Now I have to subtract points from your criticism because you failed to complete the entire assignment.

You get an automatic “F” for not reading the whole article. But I’ll jump you to a “D” because at least you were honest about it.

Comrade Y routinely gets an “F” because it’s obvious he doesn’t ever read the whole article. But then he has that learning disability that makes reading comprehension difficult: Liberalism.

DoctorRoy wrote: I disagree. Hillary has always been more of a friend to the right than the left. Always. She sat on Wal-Marts board for six years when they were at the height of their anti-union efforts and was a member of one of the most anti-union law firms in the country. If I didn't know better I'd swear she is the Koch brother's long lost little sister. I believe it was her that was pulling Bubba to the right rather than Newt and the GOP. -Bill's Wife Is an Obama, Not a Clinton

Seriously? Hillary a conservative? I'm not even she's human anymore.

Oh, you know Democrats are in trouble when they try to make Hillary into a long, lost conservative without a cause.

Thanks Comrade Doctor for sharing the new variation on the “Bush-did-it-too” theme: Hillary is Conservative Too.