It's War and Peace, Stupid 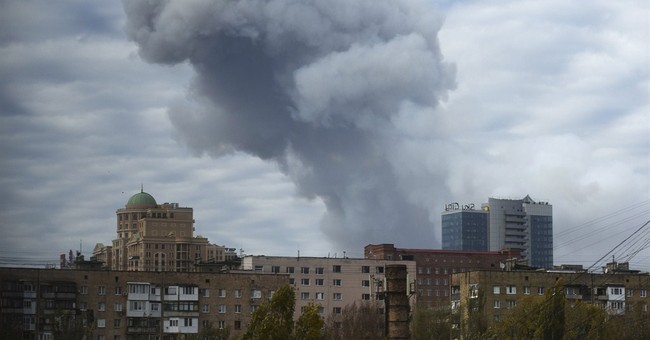 If the polls are accurate, the United States can expect a much friendlier government in Kiev after the Ukraine parliamentary elections on October 26th.

“Out will go the bodyguards and mistresses,” reports VOA News, “in are likely to come the street activists and war veterans: Ukraine's next parliament will be pro-Western and strongly nationalist, and it won't be to Russia's liking.”

But that doesn’t mean much if the Obama administration won’t do anything to help Ukraine helps itself.

But there is one compelling reason for pro-Western forces in Kiev to hope for a change of tone from Obama: Just a week after parliamentary elections, the U.S. goes to the polls as well. And while the change in government here might not be as dramatic as that in Ukraine, there remains the possibility that Democrats, out of a drive for survival, will demand from the administration changes in foreign policy and defense policy with an eye to the 2016 presidential elections.

Much of it depends upon the scope of the GOP victory in November. If it’s better than expected, then the pressure will mount on Obama to provide real assistance to Ukraine in it’s fight against Russia. If it’s worse expected, then Obama will have once again proved that perseverance has paid dividends for the progressive wing of the Democrat party.

While Bill Clinton bobbed back to the center after stinging rebukes from voters Obama has said all along that he believes in the power of persistence.

“That whole philosophy of persistence, by the way,” said Obama as he assumed the office of the president, “is one that I’m going to be emphasizing again and again in the months and years to come, as long as I am in this office. I’m a big believer in persistence.”

To many, Obama’s persistence in refusing to help Ukraine—and Iraq-- looks like stubbornness and vanity. To others, it looks like treason.

But even Obama will not remain insulated from the pressures of party politics if his party fails this election cycle half as badly as his foreign and defense policies have failed the country.

While Obama’s popularity balloon has suffered a slow leak ever since he raised taxes on everyone after his successful re-election campaign, nothing has pricked his balloon worse than the wars that Obama masqueraded as peace. While a compliant news media can cover-up for the IRS scandal, they are more or less bound to cover journalists getting beheaded by a JV force of Islamists that Obama promised was on the run.

While a compliant media can try to cover-up the combined failures of Obamacare—failures of intention, omission, commission and execution—they can’t control wars launched by Russia against a supposed U.S. ally. Nor can they cover up that Obama backed the wrong party in Egypt. Or that Obama is very close to ensuring that Baghdad falls to Islamists favored by nobody.

Merely 10,000 U.S. soldiers could secure Baghdad. And this time, it’s very likely they’d have flowers strewn at their feet.

But at least Obama is persistent in his failures.

And the question that’s before voters this fall is whether Obama and the Democrats deserve a reward for their “persistence” or a rebuke for promoting failure.

And the implications are broad for Ukraine, Syria, Iraq, Iran, Russia, and for all of the Western Democracies.

As it is for ourselves too. The question today is one of war or peace.

"You were given the choice between war and dishonor," said Winston Churchill, as his generation's Obama promised peace in our time. "You chose dishonor and you will have war."

As our country deals with issues of war and dishonor, we should at least be determined to win the wars that threaten us. That's a persistent strategy that predates Obama.

And it's been a winner every time.