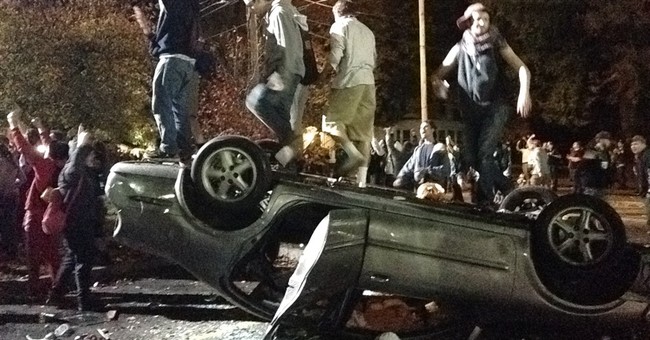 As you can imagine, I was alarmed, but not very surprised, when I received reports of rioting at the Pumpkin Festival in Keene, NH. The residents of Keene hold the Pumpkin Festival annually. Their mission is first and always to amass the most number of jack-o-lanterns in history. In 2013 they broke the previous record held by Boston when they brought together 30,581 jack-o-lanterns, according to accounts by the Keene Sentinel.

But into their 30,581 points of light this year was inserted sinister, dark forces. Forces that were nonsensical, dystopian and anarchical.

And those forces descended into the hallmark expression of Obama’s America: the riot.

“It’s just like a rush. You’re revolting from the cops,” Steven French, 18, told the Keene Sentinel Saturday night about his riotous living. “It’s a blast to do things that you’re not supposed to do.”

Steven likely doesn’t understand what the constitution is all about, which guarantees his right to remain silent, which he apparently waived to get his 15 minutes of infamy.

In this-- as with the whole affair-- I blame Obama, who also doesn’t seem to understand what the constitution is about.

I mean this is Obama’s America, right? This is a place where people are unashamed of their infamy, as long as the Justice Department won’t take action. Which of course they won’t, and we should all be glad of it.

Because again: This is Obama’s America.

A pumpkin patch, which is supposed to represent the bounty of America, is the proper place-- at least symbolically-- for the administration to take its final bows; its finial declaration of what they have accomplished in 6 years of war on the American bounty.

“Disturbances continued early Sunday near Keene State College after an annual pumpkin festival a day earlier erupted into mayhem and led to arrests, injuries and police in riot gear using tear gas,” reports Boston’s WCVB. “Keene State student Ellery Murray said she was at a party Saturday that had drawn a large crowd when people started throwing things. She said police responded in riot gear and used tear gas to break up the crowd.”

Yes, for an administration that is mostly an historical reenactment of the darkest days of the anti-war protests circa 1970, I suppose that we should be grateful that this is Keene State, not Kent State.

At least no one was shot.

But that doesn’t mean that Obama is not culpable here.

The president of the United States, as much as anything else, is responsible for the tone of the country. And the tone today isn’t just deaf, it’s also dumb as we see in Keene, NH.

And getting dumber by the day, as we see in Steven French, who will be eligible to vote now.

This is a country on edge, and it often doesn’t even know what it is on edge about.

It’s a country where the chattering class-- honest-to-goodness-- goes on MSNBC and blames people’s legitimate fears about an Ebola virus outbreak into a conversation about how racism is behind the fear, rather than government venality, corruption and stupidity.

It’s a country that thinks the government is either so incompetent (in the view of Democrats) or so disloyal (in the view of Republicans) that even an outbreak of Ebola requires the head of the CDC to go before Congress and grovel.

It’s a country where a jack-o-lantern festival takes a back seat to an administration that believes their mission is first and always to amass the most number of jackasses in history.

And here’s why it matters: Republican Scott Brown is trailing slightly to Democrat Jeanne Shaheen, (Jackass), in the race for the United States Senate in New Hampshire. Up until now it was assumed that Brown would loose to Shaheen, although the race has been rated a toss up.

This riot is the product of the hope and change that Obama brought us: Anger for anger’s sake, destruction for destroyers and betrayal of all those things hopeless liberals say they are all about in exchange for power.

I’m hoping that about 3 percent of New Hampshire’s voters agree.

Because that is all it will take to change the election into a wave for the GOP. That would be a great thing for Keene, NH to take from this year's festival.

Who knew this year's October Surprise would be a Great Pumpkin?