Jon Stewart and Stephen Colbert: The Liberal Brain Trust That Is No Joke 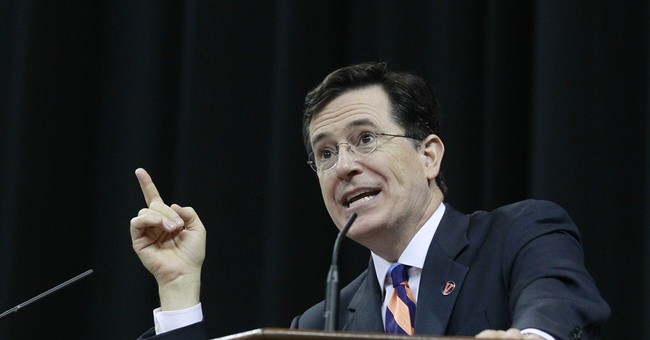 Funny man Jon Stewart says it’s a catastroph@!, while showing a clip of largely old, white congressional Republicans. Paid-faker Stephen Colbert calls it a “pin prick” in imitation of Sarah Palin. He then reckons the pin prick in relation to the economy, which he shows as fragile as a balloon.

Cheap laughs that would be funny, if of course, they were … funny.

But they are not meant as humor.

“When a humorist ventures upon the grave concerns of life,” said Mark Twain, “he must do his job better than another man or he works harm to his cause.”

These days Colbert and Stewart are the leading policy wonks, intellectuals and idea guys for the Democrats. Their pronouncements are more like what passes for policy white papers coming from liberals.

Both Colbert and Stewart came closer to presenting an actual federal budget than the Obama White House has, simply because they ran advertising spots at paid commercial breaks.

But outside of the DC-to-New-York-to-Boston-to-L.A. corridor, the government shutdown is little more than a yawn fest, with government workers taking a paid vacation.

As my colleague Peter Boyles pointed out the other day on the radio, in every other shutdown, federal workers have been paid for the time that was missed.

So, in essence, the shutdown amounts to nothing much more than the postponement of the spending that the feds were going to do right now.

With kind of a poetic logic, this makes sense to me.

After all, it was just last year, during the exact same quarter, that Obama accelerated government spending to boost jobs, the economy and his own reelection campaign.

Third quarter GDP in 2012 came in at a stunning—for Obama-- 3.1 percent average annualized growth due mainly to higher spending by the government-- spending that the administration moved forward in an obvious case of electioneering.

As a result, the subsequent fourth quarter sucked.

U.S. gross domestic product fell for the first time in three and a half years in the fourth quarter, declining by an annualized 0.1%, new Commerce Department figures show. Economists had expected GDP to increase 1%.

A dramatic 15% drop in government spending dragged on economic activity. Defense outlays were cut the most, falling by 22.2%, the largest decreased in defense since the Vietnam War’s end in 1972. Private business inventories, meanwhile, also decreased. The reduced spending and inventories wiped away 1.6 percentage points from GDP growth, and reversed the strong 3.1% GDP growth recorded in the third quarter.

Was that a catastrophe as Stewart says it is today? Or the popping of the economic balloon that Colbert alluded to?

I mean, do people really think that the government isn’t going to spend every dollar tomorrow that they haven’t spent today?

Since it’s going to cost the federal government a couple billion to shutdown and then re-open the government again, the shutdown actually can be thought of as a stimulus measure under what normally would pass as stimulus for Democrats.

The federal government will pay people to do nothing very important, or very productive, as they hit the “reset” switch on the government.

This sounds not just like a Democrat stimulus program, but rather like just another day at the office.

It's Keynesian economics at it’s finest.

It doesn’t matter what they do, as long as it’s doing something. As opposed to the rest of us who have to do something productive all day.

In a world of endless money, I suppose one would have to hire people to do nothing if and when the country ran out of important things to do. But today we have a government too stupid to know the difference between productivity and digging holes just to fill them up.

And thus you see why the Federal Reserve has been printing money ad infinitum. They need the endless money to fund the endless holes they dig in the ground. Could they just get around to filling those holes back up?

According to Bloomberg, the consulting firm IHS says that the shutdown will reduce the government’s contribution to the economy by $300 million per day. That seems like a lot until one realizes that it costs $10.5 BILLION to keep the government running every day.

That’s a cut of around 2.8 percent in government spending.

Hardly catastrophic, even if not very funny for the people affected.

Actually, a permanent shutdown-- with layoffs of all those non-essential unionized, government workers who now are without work-- seems like a great idea to me.

We can retrain them to dig holes in the ground, not our economy. Or we can ask them to fill the holes they already dug.

OK, you can stop laughing now.