On Obamacare (and Guns), We Won't Comply 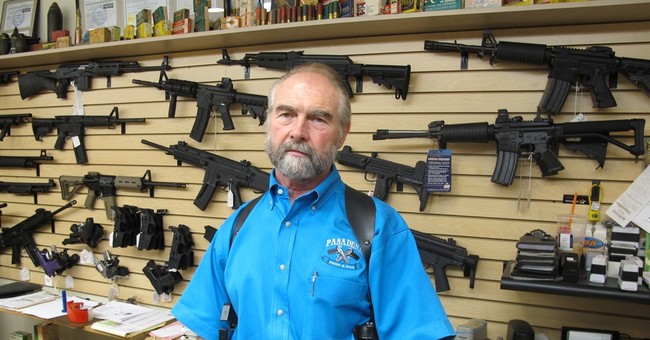 Americans know instinctively that when liberals start talking about deficit reduction that’s it’s just a case of the fantods, as Huckleberry Finn would say. And say what you will about old Huck, but he knew a couple of frauds when he saw them.

"Hain't we got all the fools in town on our side?," said Huck Finn's fraudulent king in the Adventures of Huckleberry Finn. "And ain't that a big enough majority in any town?"

It certainly is enough in DC, but the rest of the US isn't so gullible.

No matter what liberal “Wonks” like Ezra Klein say about the historically dumb healthcare “reform” known as Obamcare, Americans are uneasy about it.

And they should be.

More and more law-abiding Americans say that they have constitutional objections to the healthcare and liberty land grab by the Obama administration.

It's a land grab that has spread from mortgages to religion to healthcare to guns. But some at least-- besides Ted Cruz --are putting up resistance.

The Becket Fund for Religious Liberty, which is representing Hobby Lobby as well as a number of other organizations and groups that have filed lawsuits against the mandate, said in a statement posted on its website following Sotomayor’s decision that the company would not provide abortifacient drugs in its health-insurance plan.

The best thing- as Democrat strategist James Carville admitted last year- that could have happened for the Democrats is for the Supreme Court to have tossed out the landmark legislation that bears Obama's name.

But that didn't happen, so now the Democrats are stuck trying to make another bad law work. Maybe they can start with the website.

The law has been so accident prone that it's the first time I can ever remember the implementation of a duly enacted law being cause, in and of itself for celebration.

"The opening itself represented a victory for Obama's signature domestic policy achievement after years of attack from Republican foes and delays in building the technology infrastructure...."

Yeah, never mind the law won't do what it was supposed to do.

Because Obamacare supporters, like Ezra Klein, instead of trying to fix the problem, continue to play dirty pool when it comes to healthcare reform. They now count it as a deficit fighter, when in fact, it’s no such thing

Here let me show you the sleight of hand that liberals did to claim Obamacare fights the deficit.

Say, for example, that when we decommission the old Nimitz-class carriers we then replace them with the newer Gerald Ford class of carriers at $15 billion a clip. Let’s say, in this example, that we then raise taxes 3.8 percent on people who go over a certain income limit, to an extent that we not only pay for each carrier but we also create a surplus of $100 billion that we can apply to the deficit- just as they did in Obamcare. Actually in the case of the aircraft carriers, the exact same tax increase that the used for Obamacare would pay for the carriers and leave a surplus of $180 billion over the same period, almost twice what Obamacare claims.

Then we could pass both the replacement aircraft carrier budget authorization and the tax increase in one bundle- just as they did with Obamacare- and call it the The American Affordable Defense Act (AADA).

Then any time someone threatens to scrap the Ford class carriers we could cry out “But getting rid of the AADA would add to the deficit!”

While the typical American doesn’t necessarily know the ins and outs of Obamacare, the same confidence game has been played on them so may times that they are wise to it.

Counting on public stupidity to see a massive new spending program, like Obamacare, as some sort of deficit fighter, because THEY SAY IT IS, just shows you how weak the original case for Obamacare was in the first place.

And only in Washington can you start off entitlement reform that’s supposed to reduce spending, by ushering in a massive new government program that will greatly grow government spending. And then pat yourself on the back for it. The question is: Can't we get DC to shutdown more often?

Wasn’t it the same type of entitlement Ponzi scheme that gave us the problem in the first place?

Wonks and politicians may not see it, but those guys are in the process of self term-limiting out of business anyway- either by votes or by pageviews. 2010 was just a preview, not a conclusion even accepting the standstill in the 2012 election.

Readers know that I hate to pick on the Washington Post this way, but I don’t know anyone who would willingly call themselves a wonk in the first place. The Post’s Wonk brand is stuck in the Way-Back Machine of the 1990s.

The Wonk Disneyland, known as DC, is exactly what gets us these kinds of political and mathematical ruses that pass for solutions these day. The only choice we will have soon is to stop complying with federal mandates like Obamacare.

Because Americans continue to favor repeal of Obamacare.

The Supreme Court decision calling Obamacare a tax will likely reinforce the opinion that it’s a flawed piece of legislation that greatly expands government bureaucracy at a time when Americans think that government is doing too much not too little.

You can pass Obamacare as a deficit measure and call it Constitutional -and then wonk about it all you want. But Americans know the truth.

Obamacare, like the tax on tea that saw a load of it dumped into Boston Harbor in 1773, or Colorado's recent Obama-inspired gun grab, is just plain dumb.

And they also go against natural law, no matter what a majority of fools on both the left and the right in Washington say.

I won't comply. Nor should you.