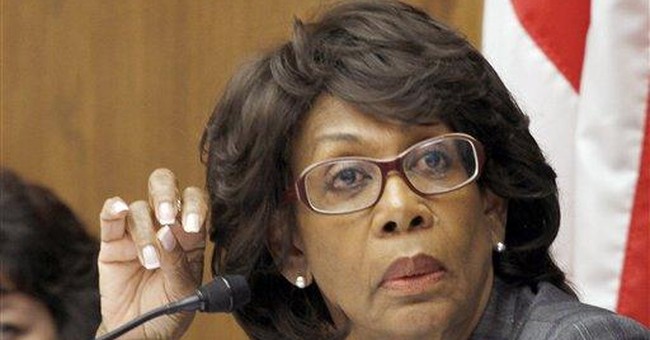 Barack Obama has promised to take back the United States House of Representatives in 2014 by using his Organizing for Action superhero/super PAC as his weapon.

And if that happens the country faces the prospect of this old socialist, Rep. Maxine Waters (D-Graft, Theft, Shakedown), becoming the chair of the House Financial Services committee.  Just imagine super-liberals Sens. Ron Wyden (D-DeathState), or Chuck Shumer (D-EastCoast) teaming up with Waters to re-write Dodd-Frank banking law to make it more liberal.

But so far B.O.’s money superstorm disguised as a PAC has made a lot of noise but hasn’t even ruffled feathers on the left side of the aisle, let alone amongst Republicans.

“OFA’s pledge to punish senators who voted against gun control was the first big test of the group’s reach,” reports Politico, “and, undoubtedly, a difficult one, given that many of the senators voting no were in deep-red states where Obama lost badly. Even measured against those odds, there are almost no successes to point to: the group didn’t sway a single vote for the background check proposal, and so far, they haven’t been able to make any of those who voted against it feel any heat.”

But it would be unwise for America to get too comfortable. Again: Just imagine super-liberals Sens. Ron Wyden (D-DeathState), or Chuck Shumer (D-EastCoast) teaming up with Waters to re-write Dodd-Frank to make it more liberal.

While there has been some talk about scratching Maxine Waters as the replacement for Barney Frank on the House Financial Service Committee, by the look of the googly eyes Democrats are making at each other, don’t count on Dems to do the decent thing. The decent thing would be have Go-to-Hell Maxine step aside for a less ethically challenged liberal- you know, if there are any.

As Ezra Klein pointed out in his WonkBlog, however, the top contender to push Waters aside and replace Frank, Democrat Rep. Caroline Maloney, waged something of an equivocal insurgency that likely depended more upon the results of the ethics investigation into Waters’ banking relationships than any outward campaign that Maloney can mount.

Look for Maxine to continue to lobby for the top Democrat spot on the finance committee; look for Maloney to wait in the background for an ethics charge to undo Maxine; and look for the GOP to keep up enough pressure to embarrass the Democrats, but not quite alive enough to do Maxine in, just yet.

Late summer 2014 should be time enough to pillory That Old Socialist in front of a TV audience full of millions of registered voters.

“As the next most senior member of the committee, the current ranking member on the Capital Markets Subcommittee and the former chairwoman of the Housing and Community Opportunity Subcommittee, I hope to use my experience to continue and expand his work in the committee,” said Waters in a statement on Frank’s retirement as reported in Politico. “I will continue to champion practical regulations, while making sure they work for consumers and the financial sector, a sector which has the right to be profitable but the obligation to be fair, two concepts which are not mutually exclusive.”

Those aren’t her only qualifications, either.

Her husband sat on the board and had stock in minority-owned OneUnited Bank, which has the distinction of being one of the few banks to ask the US Treasury for a bailout and not getting it...initially. But then on second thought, after the Maxine Brigade got to work, the Treasury finally coughed up $12 million.

But perhaps the biggest gift to Republicans will be that Waters was and still is a huge fan of Fannie Mae.

Human Events ranks Maxine’s defense of Fannie as number five in the top ten most outrageous statements Waters has ever made:

As a senior member of the House Financial Services Committee, Waters played a key role in allowing Fannie Mae and Freddie Mac’s reckless actions that led to the housing meltdown.  Here is Waters, at a 2004 congressional hearing, (and yes, that is the same “Frank” Raines that vastly overstated Fannie Mae’s earnings in order to receive $90 million in bonuses).  “We do not have a crisis at Freddie Mac, and particularly Fannie Mae, under the outstanding leadership of Frank Raines.”

Going forward, they may want to rethink that ranking.

And so should the GOP.

Maxine Waters should be the poster child for the NRCC in 2014.