There was a time in this country when ordinary people understood the connection between high gas prices and a sluggish economy. The pain they felt wasn’t just at the pump, but also at the office and in the warehouse.

There was time in this country when even government economists and network journalists knew this fact.

Over the last decade the biggest problems  in our economy has been massive new spending by state, local and the federal government and the lack of stable, low prices for energy.

After adjusting for inflation, oil prices reached a low of $16.80 in today’s dollars in 1998. Since then, with temporary lulls due to a slow economy, the price of oil has marched upward until it now stands at $98 per barrel.

The last time we saw this type of oil price action was back in the Whip Inflation Now days of Ford and Carter, who also presided over expansionist monetary policies. 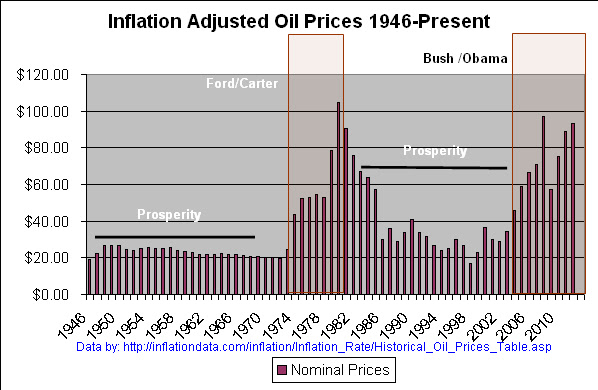 Could it be that unemployment, high gas prices, massive state spending and the loose monetary policies that go along with government control are all related?

As our friends over at Political Calculations have observed, there is a connection between high gas prices and unemployment.

We define "high gasoline prices" as being when the national average price of a gallon of regular unleaded gasoline in the United States rises above $3.50 per gallon, in terms of 2011-12 U.S. dollars. This price level appears to be significant in affecting both the spending of U.S. consumers, who respond by cutting back their spending on other goods and services, and the cost of doing business for U.S. employers, who face higher fuel and transportation costs, both directly and indirectly through their supply chains.

So in the midst of a worldwide recession, why are oil prices continuing to stay at $98 per barrel?

Well, like all of your other questions, the answer to that one is money.

As Milton Friedman observed inflation is always a monetary phenomenon.

Central banks have worked overtime injecting liquidity into the economy worldwide. The result has been inflation in things like oil prices, houses, gold, stock markets and food while our economy continues to be stuck in neutral in the United States.

Inflation of course can be the natural outcome of an economy that is overheated. But in this case, however, it is as if bankers and policy makers have deliberately given a patient a high-grade fever in order to cure them of pneumonia.

Welcome to QE1, QE2 and now bigger than ever QE3.

And why exactly have we injected so much money into the economy?

Primarily it has been done to support an unprecedented expansion on national government.

National debt over the last decade has soared from about one third of our GDP to 106 percent of our GDP, corresponding with high gas prices and sluggish economic growth. 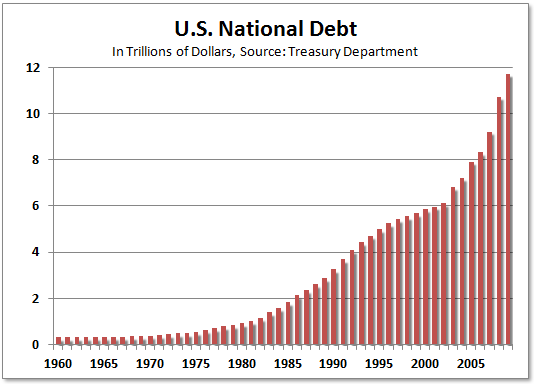 And this just in: Guess who has the largest amount of oil reserves in history? That’s right: the U-S-A.

“In fact, the U.S. has a mind-boggling 1.4 trillion barrels of oil,” writes Investors Business Daily, “enough to ‘fuel the present needs in the U.S. for around 250 years,’ according to the Institute for Energy Research. The problem is the government has put most of this supply off limits.”

We have lots of recoverable oil it seems, but we don’t have a recoverable president of the United States.

Or a recoverable central bank.

It’s time to change them both.

To do otherwise is just stupid.