Our real-life, make-believe president has two things to accomplish during this campaign season if he wants to call 1600 Pennsylvania Ave home for another four years.

His first three-and-a-half years have been so bad, that he’s had to ditch a reelection strategy and come up with a the re-write of a screenplay that he can act out over the next seven months to replace the real accomplishments that presidents usual rely on to get reelected.

If the body of the story Obama has selected so far seems vaguely familiar to all of us, it’s probably because we have already seen the story on the big screen.

Obama is just adapting if for the much smaller screen he occupies.

First, the president has to convince us that like the real-life, make-believe Pee Wee Herman, in the film Pee Wee’s Big Adventure, that nationally we have lost something of value through outright and intentional theft.

In the Big Adventure, you’ll remember, Pee Wee lost his bike -called the X1- when the rich, fat neighbor boy stole it out of jealousy. President Pee Wee is trying to sell us on the idea that our rich, fat neighbors, aided by policies of the GOP, have stolen the national X1 from the rest of us, and this has resulted in widespread misery.

Second, Pee Wee Obama has to convince us that somehow he has a way of restoring what we lost.

These are bigger tasks than a president normally faces when mounting a reelection bid. Any other Pee Wee would have taken advantage of his first four years to do the things he promised in the first place.

But because only Obama’s rhetoric was real and the results of his presidency have been make-believe- in the sense that there’s no record of accomplishment to sell to voters, or at least not one that voters would approve of- it’s important for Democrats to come up with an alternative story to the one they ran on in 2008.

So, Obama and the 98 lbs brain trust has come up with income inequality as the X1 in the liberal reelection screenplay, thereby scuttling the fiscal responsibility theme that Democrats talked about four years ago.

What else can they do after no budget, huge deficits, failed stimulus and continuing, never-ending bailouts for everyone?

In some ways, however, you have to have a lot of respect for the liberals in preserving the theatrical unity with the Big Adventure story.  The real-life, make-believe Pee Wee Herman, in a quest for clues as to the whereabouts of his bike, consults a medium who tells him that the X1 is in the basement of the Alamo.

The problem is, of course, that there is no basement in the Alamo.

This makes me wonder if Democrats consulted a medium to solve the income inequality problem too.

Getting past the fact that there has been virtually no change in individual income distribution in the United States since 1994- in other words income inequality is a myth- the Democrats have offered a solution that’s the political equivalent of a basement in the Alamo.

That’s because the Obama Tax on Millionaires that Democrats are proposing would do nothing to make income more equal. Assuming that rich people don’t opt to shelter income under capital gains- which of course they will do (hint: that’s how Warren Buffett claims he pays lower tax rates than his secretary)- Obama’s Tax would raise only an additional $46.7 billion according to the Wall Street Journal. Even if directly distributed to the 114 million households that make less than $1 million per year, it comes out to about $40 per year, per household. And of course, the White House isn’t actually referring to distributing money directly to households. Instead they are talking about “deficit reduction.”

Democrats want to raise taxes in the name of deficit reduction and then blow the money on a remodel job on the basement of the Alamo. Because if the last three-and-a-half years have proven anything, it’s that on any major issue, the solutions liberals prefer is just another of the Democrats’ version of a basement in the Alamo.

They tell us that if we just can get to this make-believe basement, then they can solve all our problems.

A Cap-and-Trade bill that won’t lower the earth’s temperature, the original problem we’re trying to solve?

A $1 trillion stimulus program that creates so few jobs that the administration has to switch gears and start talking about “jobs saved” instead?

A debt ceiling agreement that raises the debt, but offers no real cuts to runaway government spending?

An energy policy that makes energy scarcer and more expensive?

And if there is one consolation in knowing how all this turns out, it’s that I can hardly wait until Obama does the Big-Shoe Dance at the DNC in Charlotte this summer., That’s because I know that afterward, he’ll confidently get atop a hog, ride off to save the national X1- and promptly crash.

At that point, what else could he do?

Note: You can catch a preview of the president's keynote address in Charlotte here.

Side Note: Took this picture coming out of church on Sunday. Asked people to look at this and then tell me there is no God. 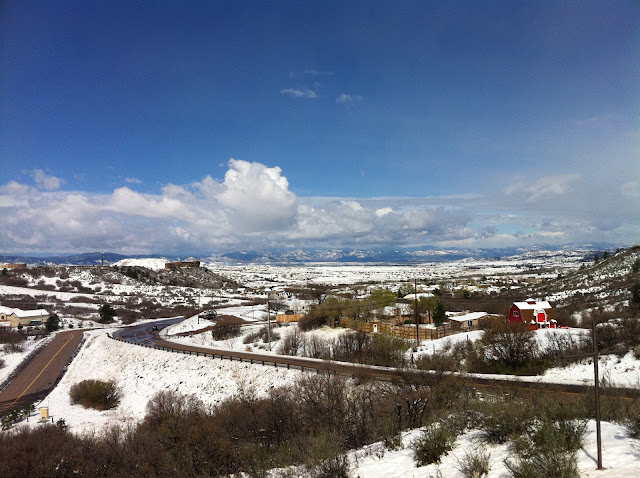