John P. Warren
|
Posted: Jun 23, 2018 12:10 PM
Share   Tweet
The opinions expressed by columnists are their own and do not necessarily represent the views of Townhall.com. 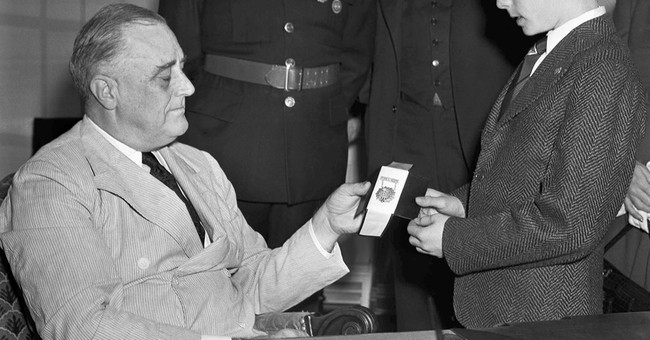 One of Charles Krauthammers’ precepts is to speak bluntly about Things that Matter. As the 2018 election season begins, one that’s bedeviled the American voter for nearly a hundred years is the notion of Progressive Ethics.

Like the phrases, honest politician, genuine imitation, and perfect child—each of which is joined by words with mutually exclusive meanings—evidence suggests that Progressive Ethics has a place all its own in the Hall of Oxymorons.

Progressives may be devoid of ethical constructs because they are political amnesiacs. They promise one thing, then disavow their words when it becomes convenient to forget their inconvenient truths. Here are just a few examples:

1. In the early 1930s, Democrats made a play for Black voters, who until WWI and shortly thereafter, had usually voted Republican in memory of their putative savior, Abraham Lincoln. What happened next? FDR’s massive government projects denied work to Black laborers and mechanics because they were not members of craft unions as required by the Davis-Bacon Act. FDR’s rejection of anti-lynching legislation permitted ongoing, unspeakable brutalities toward Blacks for another three decades. FDR’s refusal to integrate the armed services kept Black men in mostly menial positions until Truman remembered his courage.

Blacks were forgotten until needed for the Great Society welfare experiments which dismantled millions of Black families and made them welfare dependent. Except for throwing billions more into the stewpot of bureaucratic incompetence, Progressives have walked away from it all.

2.  In the 1970s, with Roe v. Wade, Progressives made their play for women voters under cover of a woman’s right to terminate another life on demand—forgetting their decades of opposition to abortion, given the religiosity of their ethnic constituents. Their true assertion of a woman’s place in the world occurred in the Clinton Administration when the president and his wife monstrously decried women who outed Bill’s ongoing predatory behavior. That Clinton has become the poster boy for #MeToo is no surprise.

3. Progressives’ amnesia continued when the LGBTQ community garnered enough support to push the Clinton’s into abandoning the Defense of Marriage Act (DOMA) right after President Obama did the same. They were all for it until they were against it.

4. In 2008, Obama promised to solve the immigration problem once in office. Except for record numbers of deportations during his eight years, he did no such thing. Instead, he promptly trashed his promises to Latinos, squandering his House-Senate, two-year majority to force The Affordable Care Act down the throats of all Americans (say, “Aahh!”).  Not least, he forgot his promise to “keep your doctor.”

5. Didn’t Obama promise a new, high level of respect amongst nations, then gave us a feckless foreign policy in Russia, Iran, Iraq, Syria, and Israel, just to name a few—all anchored by the humiliation of Benghazi, a low point in modern American diplomacy?

6. Isn’t it now becoming clear that Obama broadly manipulated DOJ/FBI investigative actions to help assure a Clinton victory in 2016—forgetting the elegant words about his presidency being emblematic of integrity?

7. Progressives’ behavior toward CIA Director nominee Gina Haspel underscores their courage to forget. When Obama nominated John Brennan for that position in 2013, Democrats had no problem confirming him by a wide margin, despite a 2007 CBS interview in which he stated that waterboarding gleaned useful intelligence information and “saved lives.” With near total amnesia, only six Democrats could vote for Haspel’s confirmation in May 2018, despite her repeatedly declared disavowal of the use of torture.

8. We come full circle to 2018, a damning memory for Progressives, given their intransigence in solving the immigration issue once and for all, despite showings a strong majority of Americans are willing to support a DACA solution and a defined, non-amnesty path to citizenship for many illegals, in trade for strong border security and merit-based immigration. Their banal cruelty creeps into sunlight when decrying the separation of children from their families at the border while furthering the number of American family units torn asunder by poverty, drugs, and illiteracy with their policies of big government, welfare dependency, and free stuff.

For a group that has done much to further one-parent households all across America, to rob our culture of unifying behaviors (standing for the anthem?), to make religious freedom its own oxymoron, Progressive promises for our future are as empty as their memories. With them, we can count on one thing: They will run from one constituency to another, promising everything, all the while dividing us and stripping us of our rights.

With Progressives, it’s nothing new. In The Benedict Option (p89), author Rod Dreher reminds us of de Tocqueville’s belief that democracy in America “could not survive the loss” of its religious faith, that “self-government required shared convictions about moral truths,” or else, the nation, “falls prey to inordinate individualism, materialism, and democratic despotism,” all precursors “for servitude.” No thanks.

Americans should know what to do about Progressives. From now on, forget them.

‘Karine Was Not Set Up To Succeed’: DeSantis Spokeswoman Calls Out Biden’s Press Secretary
Townhall
Salon has 'a great article' on toxic fandoms injecting 'right-wing thinking' into Marvel and 'Star Wars'
Twitchy
WWII Veteran Breaks Down in Tears: 'The Things We Fought For, The Boys That Died for It, It's All Gone Down the Drain'
Redstate
David Axelrod Says the Really, Really Scary Part Out Loud
PJ Media