John P. Warren
|
Posted: Nov 02, 2016 11:07 AM
Share   Tweet
The opinions expressed by columnists are their own and do not necessarily represent the views of Townhall.com. 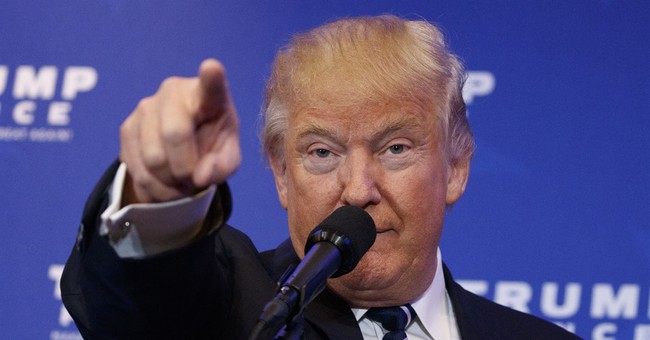 The DNC Culture of Corruption

The latest revelation about Donna Brazile ties a nice bow on the DNC’s stinkbox gift to the American people, doesn’t it? Shrill voices can rail all they want about some of Donald Trump’s more vulgar moments, but there’s nothing more vulgar, nothing more crude than the cancer of corruption among key Democrats.

It would be one thing if Bill, Hillary, Huma, Donna, and God knows who else want to dance around the integrity bar long ago thrown on the floor, but they insist on pushing off their low standard of ethics on all of us. The collusion among political and media operatives, coupled with all the Hollywood and university dupes, continues to be astonishing.

When all is said and done, is it Trump who is “unfit” and a “national disgrace?” Hardly.

In July, I wrote, “Director Comey’s Gift to the People,” also published in this space, and I stand by that commentary. If those who denounced him then—and now—take a step back and consider the backstory that’s since emerged, they might understand his reasoning a bit better.

Fully distilled, it was this way: Comey knew in July Hillary would never be prosecuted by an already corrupt DOJ and AG, as guided by BHO, to be sure. Had he done what the FBI usually does, that being to quietly refer the matter to DOJ for disposition, we would never have heard the results of their investigation in all the horrific detail Comey gave us that day. The leaking dribs and drabs would never have given the matter the gravitas it received from Comey’s bravura exposition.

Of course, hell broke loose within the FBI, and when the latest trove of emails surfaced, Comey rushed for a second chance at bat. He himself likely had not seen or evaluated any of the emails, but it is likely members of his staff had seen enough to make him step up to the plate.

Why another public announcement, instead of a discreet leak? The FBI doesn’t get excited about parking ticket offenses, now does it? What Comey’s agents must have seen indicated that in the event of a Clinton election, the charges against her, Bill, and the Clinton Foundation would be so grave as to throw the country into protracted constitutional chaos. We might surmise, that the depth of dirt in CGI will make some players do almost anything to keep its secrets buried forever. Comey had no choice but to drop us a clue.

As a postscript, wasn’t the BHO defense of Comey a bit of a creepy Halloween surprise? Was he creating a distance from Hillary, as some wish? Or should we wonder about his certainty she will become president?

Electronic vote fraud has been on my Google feed since doing exhaustive research for my novel, Turnover, published in 2014. Based on info surfacing in 2012 and 2013, it was more than plausible that at least one owner of a major electronic voting software and hardware provider to several 2012 battleground states could have been especially beholden to key Democrat players. Since then, more connections between voting equipment purveyors and the Clintons have surfaced. Those relationships will require further scrutiny.

Experience suggests the D side will issue a bombshell—completely phony—this Friday or Saturday, leaving little time for Trump to refute it. That dirty trick aside, the election is now his to lose. Yes, it may be tight, especially in places like North Carolina, but it could also be a Reaganesque blowout. The polling is a relief and a pleasant surprise, as it may suggest that enough voters remain to erase the Clintonian first-woman euphoria captivating so many LIV’s.

Too early and full digital voting are the greatest enemies to a fair election today. Those casting their ballots a week ago were unaware of the FBI’s recent action, the purported DNC-CNN collusion, and the explosive Obamacare rates, and all they’ve done is give the vote-tamperers more time for dark magic. After all, on November 9th, who will be able to parse the vote from two weeks earlier to prove with any certainty who voted for whom?

Yesterday’s Breitbart piece was icing on the cake. As in Turnover, where the US Election Assistance Commission “monitored” the vote in 2012 battleground states, 46 states have now asked DHS (via the USEAC?) to “monitor” their systems to safeguard against cyber attack. Great move, but scary, isn’t it? With a political party and its players already found to have stopped at nothing to manipulate their own nomination process, what or who would stop them from doing whatever it takes to retain power? It wouldn’t be President Obama, would it? Or Attorney General Loretta Lynch?

At this writing, Trump has moved to a tie in national polls. Every reader of this column knows I’m not a yuge fan of his, but I’ll overlook his many personal flaws to have the last, best shot at ensuring our constitutional liberties, and those of my children, for however long Almighty God permits it to be. There’s no other alternative.

There have always been threats to our electoral processes—from within and without. The watchword after 9-11—“If you see something, say something”—applies everywhere for everyone throughout this election cycle. What remains is simple: Vote Trump, Johnson, or Stein. Or stay home. We’ll all be grateful.