Hillary Clinton: Not A Good Bet

John P. Warren
|
Posted: Jan 17, 2016 12:01 AM
Share   Tweet
The opinions expressed by columnists are their own and do not necessarily represent the views of Townhall.com. 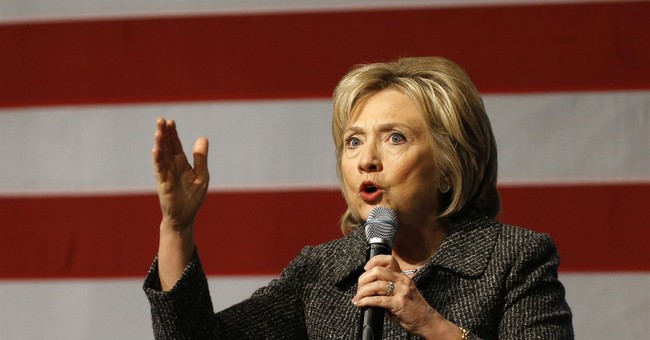 The latest Republican debate is now history, and by some miracle, all the candidates are united behind one goal: Defeating Hillary. In the end, however, betting on Hillary being the Democrats’ nominee may not be where the smart money goes.

It’s true that in the past two weeks, a John Stossel piece and a separate, unattributed article The Economist, voices at opposite ends of the political spectrum, noted that the betting markets—being savvier in the aggregate than pundits—now back Hillary Clinton as the next President of the United States. To be fair, Stossel’s Townhall.com piece and The Economist made their predictions based on betting as of the moment. The only real disagreement between them was that Stossel’s site, ElectionBettingOdds.com gave HRC a 55% chance while The Economist’s source, PredictIt, an internet-based exchange sponsored by Victoria University of Wellington in New Zealand, gave her 54%.

It’s important to know that broad based betting markets from 1884 onward, except for a period from the late 1940’s until 1988, when polling by Gallup and others temporarily stripped the sex appeal from the gamble, have had a highly accurate prediction rate once a clear favorite had been identified by around mid-October.

It’s still early days, of course, but this observer is sticking with the prediction made in this space on 3-23-15, “Sleeping With The Enemy,” and affirmed on 10-6-15 in “Why The GOP Can Lose 2016,” and it was this: the Democrats will nominate Joe Biden for president and very likely, Elizabeth Warren, for the second spot. Why does this still make sense?

Many have begun to notice the Clinton campaign’s first, slow turns on the downward helix of a dying campaign. The rising poll numbers for Bernie Sanders should be one indication, but news the FBI has expanded its investigation into misused email protocols and perhaps, the mixing of Clinton Foundation business with Department of State matters should snap all of us snap awake. That investigation may be unable to avoid questions yet to be asked by liberal State Media stars, such as:

· As Secretary of State, did you solicit contributions from foreign governments for the Clinton Foundation after you promised the president you would not?

· Did you permit special access to yourself and senior DOS officials for Clinton Global Initiative donors, facilitating lucrative contracts and other considerations, as alleged by The Washington Examiner’s Sarah Westwood, and others?

Those are serious legal questions, of course, with the answers having potential criminal repercussions, but they are no less important to many voters than others, if only someone could ask them, and get a truthful answer. Here are just two of many:

· Although we know you testified before Congress about Benghazi, and we know you don’t think it “makes any difference, anyhow,” why did you tell your family and certain members of the foreign diplomatic corps the truth about the attack, but lied to the families of the four slaughtered DOS employees and the rest of America?

· Do you accept the endorsement of Planned Parenthood, even though it has been accused of selling infant body parts, and even though the organization was born of Margaret Sanger’s dream to limit the births of African-American children (whose black lives didn’t matter to her, apparently)?

Much has been made in recent punditry about the RNC’s purported fright that Donald Trump might be the nominee to run against Clinton. The bigger news should be the DNC’s more horrifying nightmares about the coming implosion of Hillary Clinton’s campaign, as she seems to shrink into herself, with no one left on stage but Sanders and O’Malley. What’s more is that average, current polling, as compiled by Real Clear Politics, shows the top six Republicans either beating Clinton by a few points or within a few points of beating her, and that includes a Trump matchup.

Memory plays tricks, but it seemed odd at the time that old Joe Biden decided a bit quickly against a head-to-head with Hillary, the ostensible reason being he had no campaign infrastructure, and was not on a primary ballot anywhere. That played well, but since then, Biden has been eerily quiet, and waiting.

The truth of the matter is that while primary voting is controlled by the states and the party structure, after the first convention ballot, all or nearly all delegates will be free to bolt. And where will they run when their convention (Philadelphia 7/25-28) comes after Republicans have made their choices (Cleveland 7/18-21)? With not much time left in the campaign season, they’ll flock to the only other electable Democrat around: Joe Biden. And to placate the noisy, growing Sanders crowd, Elizabeth Warren will be, for them, a more than palatable pick for VP.

That takes us back to the RNC and its dilemma. One has to wonder if the great establishment fear is not Trump running against the damaged Clinton brand. It’s an unmanaged Trump running against old Joe (who will be 74 at his inauguration), yet one of the sharpest, most sympathetic pols around, and one with whom enough nervous Republicans may quietly seek shelter.

This is not to make a case against Trump. For him or not, he’s earned front-runner status and it’s his to lose. As one wag observed, if you think he can’t make Mexico pay for “the wall,” just remember he’s made the media pay for every bit of his campaign publicity. Yet, for candidates and voters, surprises aplenty are yet to come, and the whole point is this: it’s way too early to buy a political powerball ticket, so don’t bet on anybody yet, especially Hillary Clinton.
Jen Psaki's Ridiculous Spin After Biden Claimed He's Been to the Southern Border
Julio Rosas
U.S. Supreme Court Will Fast-Track Cases on Texas Abortion Law, Leaves Law Remaining in Effect
Rebecca Downs
Yes, Voters Are Starting to Blame Biden for the Price Spikes
Matt Vespa
Here's What Happened When Marjorie Taylor Greene and Liz Cheney Met on the House Floor
Matt Vespa
Here is Biden’s Schedule for the Weekend
Katie Pavlich