The Quintessence Of Irony, #MuslimLivesMatter 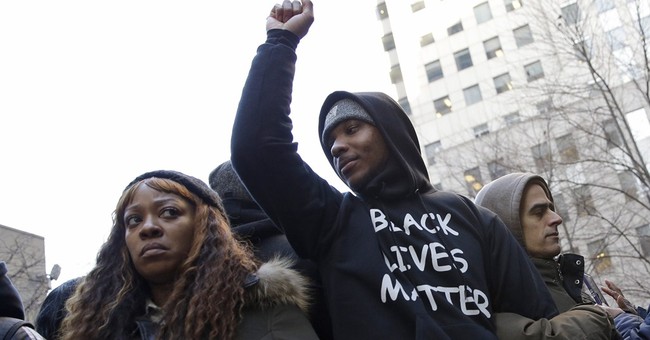 On Wednesday, the Twitter hashtag #MuslimLivesMatter began trending after news spread of a multiple homicide involving three Muslim victims. A self described “radical atheist” or “anti-theist,” Craig Stephen Hicks, shot three victims in the head on Tuesday—21-year-old Yusor Mohammad Abu-Salah, her 19-year-old sister, Razan Mohammad Abu-Salah, and her husband, 23-year-old Deah Shaddy Barakat. Reportedly, the three murders may have been the result of a long standing dispute over a parking space.

Murder isn’t really news these days. The bastions of Liberal governance—Chicago, Los Angeles, Detroit, and New York—are killing fields where the depraved roam unfettered and prey with impunity on the disarmed. These "gun free zones" are bloody laboratories where the mad science of Liberalism experiments with human nature, unfettering the beastly aspects of mankind to prey on the veritable white mice of society’s weak, incoherent, and unprepared. Liberalism's black arts dismantle conscience and obliterate what is known of God, creating monsters of materialism who view their fellow man as mere meat sacks to be disposed of at the least provocation. Liberalism also destroys the citizen and enslaves him to an all powerful state. The only argument for inalienable rights is in the existence of God. If God is not the author of personal rights then they are merely bequeathed by the whim of the state. Your right to life, liberty, and the pursuit of happiness may then be revoked at any time and for any reason, or for no reason at all. The Liberal cognoscenti know all this, but are committed to defending the temple of license and power at all costs.

If God is dead then any pet predilection may be excused. Abortion? Why not, it's just an inconvenient mote. There is no God to condemn you, no moral order to restrain you from any act of hedonism. But, don’t disturb an Eagle's egg. That may land you in prison or paying a substantial fine. LGBT? Of course. Shelter under the nonjudgmental wing of Liberalism. But, what Liberalism doesn't advertise is that behind the facade of the riotous bacchanal is an ancient cult of death. Liberalism doesn’t, nor can it, kill God, it is rather the death of humanity. Atheists may claim to have destroyed God but they do so while the universe mocks their hubris. Turn your eyes to the havens and confound yourself with the jewels of God's creation, set in the tapestry of the infinite.

So, the story of Craig Hicks may be buried by the Liberal media. One of their dark creatures has escaped the lab, followed the programming, and done foul deeds in a far too public manner. Craig Hicks is a self-proclaimed “anti-theist”and ascribes to Liberal orthodoxy. He is the Liberal monster and an exemplar of how the Liberal Left promotes the unbalanced and produces the homicidal. Much to the chagrin of main stream media, Hicks is one of their own—a rabid, God-hating Liberal. He follows in a line of Left-wing killers, a Pantheon of butchers.

All the best Liberals are murderers. John Wilkes Booth who fatally shot Abraham Lincoln was a Democrat and committed the assassination in furtherance of southern Democrat secessionist objectives. Joseph Stalin's butchery made another famous Leftist, Adolph Hitler, look like a Sunday school teacher. It is estimated that Stalin, and his Left-wing, communist policies, were directly responsible for the deaths of 34 to 49 million people. Margaret Sanger, the mother of Planned Parenthood, responsible for propagating the barbarous butchery of infanticide, hoped to control the size of the black family by encouraging black women to abort their babies. Her liberal sensibilities were unaffected by her genocidal aspirations. The “modern”atheism that Liberalism embraces is no different than the nihilism of Nietzsche’s perspectivism, the Will to Power, and the “death of God.”Hitler found all of those concepts quite convenient in support of his “Final Solution,”leading to the murder of tens of thousands of jews in concentration camp ovens.

Liberal atheism spawned Craig Hicks and loosed him on his Muslim neighbors. His subhuman philosophy led him to value life so cheaply that he decided to murder three people, at least in part, over a dispute concerning a parking space. This incident juxtaposes a Godless philosophy of death with a theology of violent conquest. From this, a profound irony has emerged as the adherents of Muhammadanism now rally around the hashtag #MuslimLivesMatter. Since the days of the prophet, Islam has been spread by the power of the sword and by conquest. In fact, hundreds of years of Muslim incursions into the Holy Land and into the Byzantine empire sparked the Catholic Crusades. Contrary to popular history, the Crusades were both a defensive war and a pilgrimage. Two excellent articles treat this piece of Catholic history in detail here, and here. And, as Dinesh D’Souza has posited, “If the Muslim right to Jerusalem was solely by force of conquest, why wouldn't the Crusaders have the right to take it back by force?”

However, the history of Christendom, though besmirched by episodes of Catholic heresy, to include the inquisition, is one of peace, liberty, and evangelism by means of love, compassion, and intellectual engagement. Islam continues to be a religion of brutality and intolerance as any surviving Christian from Iraq or Syria can articulately attest. Not to mention the genocidal mania of Islamists regarding the annihilation of the state of Israel. Iran, an indisputably Muslim nation and a state sponsor of terror, perpetually militates for the extermination of Israel, a world-wide caliphate, and the ubiquitous application of prehistoric Sharia law. Even slavery is Muslim orthodoxy and is practiced today. All of this casts the #MuslimLivesMatter hashtag in a rather ironic light.

The triple homicide committed in Chapel Hill, North Carolina is tragic on many levels. It reveals the tragic nature of Liberalism’s atheism, which transforms rational man made in the image of God into an animalistic creature driven to barbarity by instinct and impulse. We shouldn’t feign surprise, God has revealed as much, “The fool hath said in his heart, There is no God. They are corrupt, they have done abominable works…”(Psalm 14:1) It is tragic that three lives have been extinguished at the interstices of two of modernism’s great barbarities, Liberalism and Muhammadanism. Both systems are dehumanizing and produce the most abhorrent forms of violence. Calls for coexistence are simplistic and futile. Islam does not seek coexistence but only submission in matters of conscience and governance. Christianity, liberty, and democracy can no more coexist with tyranny, atheism, and Islam than can the lion lie down with the lamb—this is the ultimate irony of #MuslimLivesMatter