The NYPD Turned Its Back On Liberalism 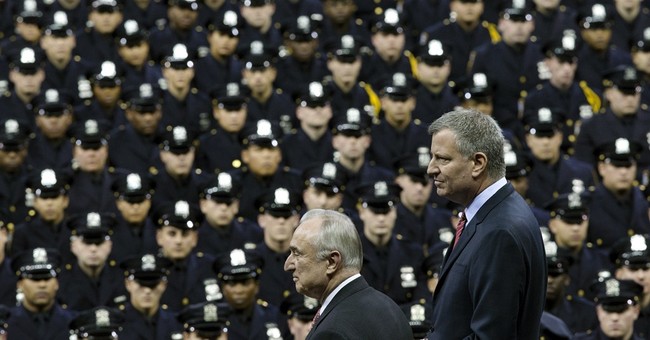 Liberalism is always anti-cop. It seeks to transfer the responsibility for criminality from the individual to society as a whole and, by extension, to its agents of enforcement. This moral redistribution is a political expedience that liberates the dysfunctional from the notion of personal responsibility and allows the criminal, the deviant, and the underachiever to feel good about themselves. The entire structure of Liberal political power is erected on this foundation of moral turpitude.

Liberalism is a perversity of positive reinforcement and binds the debauched to a slavish system that rewards anti-social behavior with excuses, rationalizations, and largess. Liberal politicians are high priests in a dark order who offer indulgences in exchange for ballots. The democrats peddle in a commerce of souls, and cops are left to sort through the mountains of human detritus expelled from the alimentary canal of Liberal politics.

Liberals, progressives, democrats, whatever you wish to call them, all subscribe, wittingly or not, to the collectivist dialectic which perpetually agitates for social change (manufacturing grievances designed to position classes in opposition to each other), creating the sympathies necessary for the destruction of democratic systems. And, this is why New York Police Department (NYPD) cops turned their backs on Mayor Bill de Blasio. He’d rather pander to the politically expedient fiction of blacks as victims, than support the reality of law enforcement’s critical role in preserving life and liberty. It’s so much easier for people like de Blasio to just go along to get along with professional agitators like Al Sharpton. Besides, it ensures his continuing membership in all the prestigious liberal circles of money and power.

But, were NYPD officers right in turning their backs on de Blasio in such a public way? In short, yes.

Law enforcement officers take an oath. As jurisdictions vary, so do oaths of office, but only in small detail. Federal agents take the following oath:

“I…do solemnly swear (or affirm) that I will support and defend the Constitution of the United States against all enemies, foreign and domestic; that I will bear true faith and allegiance to the same; that I take this obligation freely, without any mental reservation or purpose of evasion; and that I will well and faithfully discharge the duties of the office on which I am about to enter. So help me God.” (5 U.S. Code Section 3331 - Oath of Office)

Similarly, all NYPD officers take this oath of office:

Nowhere are law enforcement officers required to swear allegiance to a man or to a party, but they are directed to take an oath to support and preserve an idea. A hallmark of fascism, which occupies the same branch as Liberalism on the collectivist family tree, are government agents that take an oath of allegiance to a charismatic leader or to a political party. The cult of personality has taken root in American society, and has come to fruition in our politics as masses of Americans find themselves swayed by a haberdasher’s pant crease and a cute turn of phrase. Ideas matter. It does not matter that the president is hip and elicits a prepubescent tingle up the leg. Like Obama, Hitler had a crease in his pants that could cut glass. Politically, our most important ideas are engrossed in the Constitution and it is to this document, to these singular ideas, that law enforcement officers swear an oath of fealty that subsumes all others.

The primary tenet of Liberalism, to which de Blasio enthusiastically subscribes, is equality of outcome. This is a fiction that does not bear the scrutiny of considerate thought but so few of us have the time or inclination to scrutinize. In these grey days, it’s practically taboo. We all have different talents, capabilities, and have all made choices that impact the manner in which we pursue happiness. The Constitution does not promise, and the American dream has never envisioned everyone acquiring the same stuff or arriving at the same place. We are guaranteed equality before the law, and the right to participate in the free enterprise that has made America the most astoundingly successful nation that the world has ever seen, or is likely to see again. Equality of outcome gives rise to the animosity that the Left so assiduously cultivates, which resulted in rioting in places like Ferguson and culminated most recently in the murder of two NYPD cops. It sounds so altruistic to subscribe to Marx’s dicta, “from each according to his ability, to each according to his need.” But, the dystopian reality becomes a mockery of the altruistic. Those with ability are chained to the grinding wheel of insatiable need; the needy being perpetuated by the incalculable inefficiencies in a ponderous bureaucracy incapable of equitable redistribution.

So, in performance of their sworn oath, NYPD officers availed themselves of a form of protest to decry the Liberal abuses and usurpations of de Blasio. They recognize that de Blasio’s pandering to the lawless conveys a sense of legitimacy upon all the imagined injustices and inflames the passions of the weak-minded, lending the veneer of righteousness to a fundamentally immoral enterprise. So, the thin blue line turned its cerulean back on a spirit at enmity with the principles of liberty. Like they do everyday on the streets of New York, in black and white neighborhoods alike, these cops are willing to risk all to secure our safety, our happiness, and our liberties.

The men and women of the NYPD do not serve the interests of a Mayor and if their actions in the performance of their sworn duty bruises de Blasio’s effete sense of vanity then so be it. Let them feel the cascading laurels of our approval while they continue to selflessly stand in the gap.

The liberal promise is only a gambit for power. We must heed the example of the NYPD and turn our backs on demagogues who promise the radical transformation of our American republic.