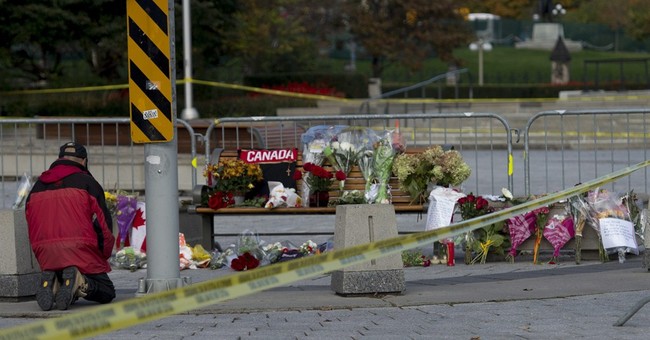 Militant Islamists don't just hate George Bush, baseball, and apple pie, they hate Canadians too. Islamists hate as a fundamental characteristic, and that hate is driven by the orthodox doctrines of their bestial death-cult. They even hate Barack Obama. Despite his world-wide apology tour and his dutiful obeisance to all things Islam, the violent jihadists continue to wage war against the Great Satan. It matters not if his face is white or black, the American Devil refuses to bow the knee to sharia law and the prophet of Islam—this is all the reason they need for hate.

Even if you bought the load of bovine excrement that Obama shoveled during the 2008 election campaign, felt the pangs of white guilt or imperialist remorse, and cast your atoning vote for the transformative icon, beaming with messianic glory—slimy cave trolls like Nidal Hasan, Alton Nolan, Michael Zehaf-Bibeau, and Zale Thompson hate you too.

The Canadians have reacted to this act of barbarity in a manner that is ennobling in the face of such tragedy. The Canadian Prime Minister, Stephen Harper, has acknowledged, unequivocally, the true nature of the menace and has, therefore, provided a rational and moral basis for meeting out justice in form and proportion equal to the real threat. He is a stark contrast to the mealy-mouthed Obama who natters while enthralled in befuddlement. Obama can’t quite get his head around the fact that jihadists won’t be charmed into submission or talked into surrender.

Harper isn’t cowering impotently behind the Obama administration's term of art, "workplace violence." A purely political artifice made ghastly because it defames the victims and the heroes who acted in the face of Nidal Hasan's terroristic rampage.

The "workplace violence" pseudonym is a loin cloth that Obama clutches before his naked impotence.

These acts can’t be terrorism because it refutes the party line promulgated by the Obama administration and their media toadies. These acts of terrorism demonstrate conclusively that Obama’s policy of appeasement is a colossal failure. All of Obama’s bowing and scraping, his flight from Iraq, the release of five top level terrorists from Gitmo, and his base campaign of Islamo-centric political correctness have only resulted in violence and death in our own towns and cities. Obama has only succeeded in making citizens less safe.

As much as Obama and his sneering cronies represent the ignoble, Canada’s Parliamentarian Sergeant-At-Arms, Kevin Vickers, represents the heroic and is a living example of the profoundly efficacious principle of “the only thing that stops a bad guy with a gun is a good guy with a gun.” This is difficult for progressives to understand but Michael Zehaf-Bibeau was an evil man engaged in an evil activity. It was not “senseless violence” as the perpetually confused Barack Obama asserts. The violence was purposeful and was in the pursuit of a clear objective. Obama’s characterization of “senseless violence” implies that it was some spontaneous and amoral happening, like a tornado, car accident, or a playground scuffle. This is profoundly wrong and smears the heroic acts of Mr Vickers.

Zehaf-Bibeau set out to do murder in the name of Islam and to perpetrate an act of terrorism upon the very heart of Canadian civilization. Mr. Vickers defended not only the people in the line of murderous fire but the nation itself. Obama’s reactions to these incidents demonstrate his complete indifference to the heroic actions of American citizens and to the interests of our national security. Obama is an empty suit.

Mr. Vickers did what all men of honor and conviction do when confronted with a mortal threat. He armed himself and strolled out into the marbled halls of the parliament building to confront evil. Mr. Vickers knew he was carrying out justice and that Zehaf-Bibeau had condemned himself by the evil of his actions. Killing that Islamozai trash was a moral obligation. As the crowds of sheep ran, hid, barricaded themselves, or armed themselves with kitchen knives, Mr. Vickers strode the halls with the confidence of righteousness and ended the miserable existence of a base terrorist. No man of honor would shrink from such a duty.

In our own country we have witnessed another act of “lone wolf” style terrorism. A muslim armed with a hatchet attacked a group of New York City Police Department (NYPD) officers. Evil men will always find tools for their trade. Despite some of the most restrictive gun control laws in the country, Zale Thompson managed to critically injure one NYPD officer and seriously wound another. Gunny Sergeant Hartman had it right, “it is a hard hart that kills.” Gun control laws only make easy victims out of the law abiding. Evil men will always acquire whatever tools they deem necessary to carry out their evil plans. But, gun control isn’t about saving lives, it’s about control. For all its platitudes about liberty and unbridled freedom, progressivism is just about imposing control and coalescing power into the hands of an oligarchy. Oily progressives can’t even keep their grubby tentacles off your favorite size soft-drink cup.

Clearly, Obama and his party don’t have any answers. Despite Obama’s promises of transparency in 2008, his administration is riddled with corruption and scandal. Despite Obama’s globe trotting junket of apology and appeasement, the threat of Islamist terror is greater now than ever. The Canadians are getting this one right because their government is not at cross purposes with their national interest. Terrorists continue to evolve their tactics to suit an ever changing operational environment. Obama is either too stupid or too doctrinaire to recognize the threat and as long as his party remains in power, America will continue to suffer the humiliation of retreat.

With Police Being Attacked and Under Threat of Being Defunded, July Gun Sales Were One for the Record Books
Matt Vespa
Former MSNBC Producer Explains Why She Left in Blistering Letter
Leah Barkoukis
One Democrat's Hypocrisy Soars to New Heights... All Over National Parks
Beth Baumann
Karen Bass Previously Praised the Church of Scientology and Now It's Biting Her In the Butt
Beth Baumann
Why President Trump Is Calling for a Revote In a Primary Election
Beth Baumann
Pro-Police Groups Paint Nation's First 'Back the Blue' Street Mural in Tampa
Madeline Peltzer