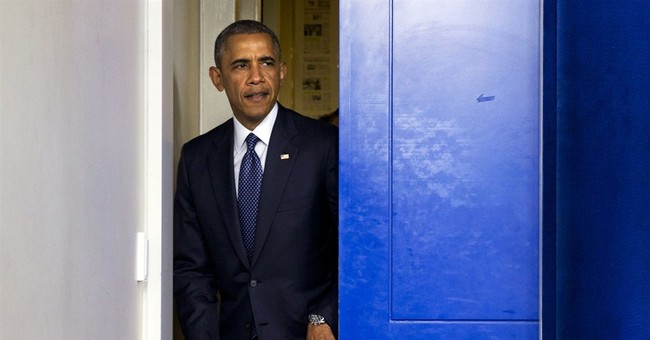 Presidents are supposed to be exemplars. Why else do we build monuments to them? They're supposed to be superhuman and represent the power and virtue of democracy, the iron resolve of a nation before a world of howling enemies, the compassion of a powerful virtue that inspires the fidelity of liberty loving peoples across the globe. Presidents aren't supposed to be shabby. When they are, they diminish the body politic in its teaming millions. We're all affected, admittedly or not.

President Barack Obama is shabby and his legacy is composed of a long train of scandal. Nixon's impeachable offense seems like a parking violation in comparison.

Early in his presidency, Obama met with King Abdullah and perpetrated a calumny ignored by the establishment media--he bowed before a muslim potentate. The act was breathtaking in its impropriety. What is particularly American is our instinctual aversion to forms of obeisance. By lowering his head, Obama did obeisance to thousands of years of human history marked by conquest and slavery. American presidents do not bow. Presidents do not perform acts of fealty before foreign heads of state. This was only the beginning of the Obama legacy.

Barack Obama has amassed an amazing catalogue of scandal during his six years in the oval office. These are just the highlights.

During Obama’s green energy jobs faze his administration “invested” $535 million dollars of the People’s money in a failing green energy business. Solyndra was bankrupt months later on August 31st, 2009. Not coincidentally, Solyndra’s primary backer was the George Kaiser Family Foundation. Mr. Kaiser was involved in bundling contributions for Obama’s 2008 presidential campaign. This was simply business as usual for Washington insiders, but Obama had promised to usher in a new era of openness and political enlightenment. With Solyndra, Obama revealed himself to be just one more corrupt politician.

Following hot on the heels of the Solyndra affair, an enterprising journalist and Townhall editor, Katie Pavlich, published a well documented book on a DOJ operation called “Fast and Furious.”The scandal involved the trafficking of firearms by ATF across the Mexican border and into the hands of drug cartels. These firearms were allowed to “walk”and were later found to have been used in several homicides and were found at the murder scene of Border Patrol agent Brian Terry. For his role in the dingy affair, Attorney General Eric Holder was found in contempt of Congress.

The next outrage to surface involved the National Security Agency (NSA). This agency is tasked with electronic collection and acts as a giant vacuum cleaner, capturing every electronic signal emanated into the atmosphere. Traditionally, NSA operations have been limited to OCONUS collection, but not under the Obama administration. In Orwellian fashion, the NSA has been tasked to collect metadata on every U.S. citizen. What the Obama administration needs with this mind-boggling amount of data is beyond rational comprehension and contravenes the Constitutional provisions in the 4th amendment.

Not to be outdone by the NSA outrage, the IRS engaged in politically motivated harassment of conservative political organizations. The fetid trail of abuse of power reaches to the highest levels of IRS management, most notably, with Lois Lerner claiming a 5th amendment privilege during her testimony before congress. Far from being an incident isolated to a few rogue agents the criminal abuses of power reach to the IRS director’s office and beyond into the inner sanctum of the White House. The affair stinks of cover-up with claims of missing emails and self-destructing hard drives—claims unheard of among federal agencies.

Next in Obama’s constellation of corruption is the release of the Gitmo five. In an attempt to circumvent congress and the People themselves, Obama unilaterally released the five most notorious terrorists held at Gitmo. This is the equivalent of releasing members of Adolf Hitler’s general staff. In a stunning act of hubris and naiveté, Obama has unraveled the tightly wound cords of national security all for the sake of ideology. To compound this unmitigated act of treason, Obama released these five hardened Taliban leaders for one U.S. deserter, Bowe Bergdahl. What leaves thinking men and women agog is the complete lack of interest or condemnation from the establishment media.

In his zeal to right fictitious wrongs and to diminish American influence, Obama has materially supported the reconstitution of terrorist networks and has provided terrorists with a base of operations in Iraq. It is clear that the American people are having a hard time getting their minds wrapped around such colossal ineptitude from the Oval Office. As the result of Obama’s actions, we will again see American cities devolve into battle grounds strewn with American corpses.

Obama’s purposeful dissolution of border security and refusal to carry out the duties of his office with regard to enforcing immigration law are, to date, his darkest crime. There can be no real expression of American sovereignty without a secure border and consistent enforcement of immigration policy. There can be no doubt that this is part of Obama’s larger strategy to diminish American power and to redistribute American resources to the third world.

Recently, the Obama administration has embarked on a shameful campaign to lure illegal immigrant children across the border and to manipulate them as pawns in a ghastly game of political intrigue. Clearly, Obama’s working theory is what monster of insensitivity could turn away suffering children from the border? And, once here, parents are sure to follow. In any case, Obama and the democrats theorize that they are sure to secure a cadre of new democrat voters. Children suffer abuse, depredations, and death so that democrats can continue to enjoy the luxuries of power. This practice is vulgar in the extreme and is authored by Obama and his aristocratic cronies. Perhaps, building American ire toward this democrat practice and toward republican intransigence will bring this shameful episode to a close sooner rather than later.

America is a nation of immigrants but not of the diseased, criminal, illiterate, or indigent. America is a nation of immigrants representing the capable, yearning to contribute to and participate in the American experience. Until the creation of the welfare state, immigrants did not arrive here seeking benefits but rather brought the hope of forging their own destiny as free men and women, participants in a capitalist system that held forth the promise of opportunity regardless of class.

A recent Quinnipiac poll found that Americans consider Barack Obama to be the worst president since WWII. History will judge President Barack Hussein Obama severely. Obama’s legacy is and will continue to be one of scandal and national shame. This is inevitable, since Obama’s vision of America is distorted by his personal prejudices of race and imperialist depredation. He is a doctrinaire creature of the Left and we will all continue to suffer for it.