The Medal of Honor and Race 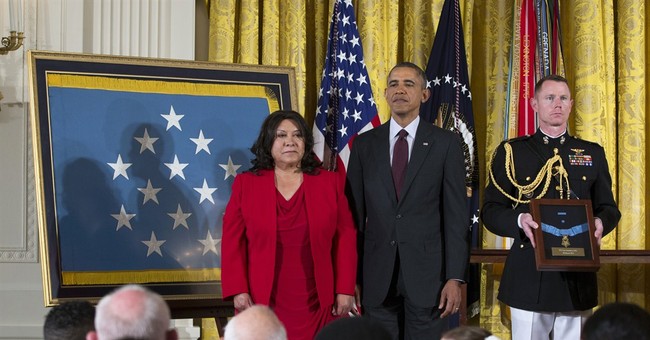 The other day, I caught some breaking news on Fox. On March 18th, President Obama awarded 24 Medals of Honor to individuals who had been denied the honor due to racism. That’s all I needed to hear. I was enraged. Why? Because, the Left assiduously sustains the mechanisms of racism and hate. They’ve developed it into a smoke stack industry and have constructed assembly lines of malice, churning out classes and victims twenty four hours a day. An endless variety of discontent, racial subversion, and agitation.

Racism is a multi-million dollar business and business is good. Well, it’s good for the plutocrats at the top of the pyramid: the Jessie Jacksons, Al Sharptons, Louis Farrakhans, Reverend Wrights, and Barack Obamas of the world. Their power is generated and sustained by the friction between the classes, particularly between races. The heat feeds the furnace of their avarice and the burning discontent creates the chimera of antagonists by which they inflame the passions of their dupes. And, passionate fury demands change. These Leftists will sacrifice any object to their ritual cauldrons so long as it feeds the infernal machine. Now, dangling above their smelting pots is the gleaming Medal of Honor.

The Medal of Honor was first commissioned by President Lincoln during the Civil War. Since that time there have been 3,487 recipients, including one woman. It is bestowed on those who display gallantry, intrepidity and heroism above and beyond the call of duty. 88 Medals of Honor have been bestowed on African-Americans, the first being awarded to William Carney, July 18, 1863, during the Civil War. 59 have been awarded to Hispanic-Americans, 33 to Asian-Americans, and 32 to Native-Americans.

Obama’s actions are not without precedent. The first President to presumptively attempt to right wrongs was Jimmy Carter, followed by George H.W. Bush and Bill Clinton. Obama's recipients were awarded our nation’s second highest honor, the Distinguished Service Cross. Additionally, several white service men where identified during the review of military records to be deserving of the upgrade. But, in Obama's words, "some of these soldiers fought and died for a country that did not always see them as equal."

Once again, race has been foisted on us and threatens to overshadow the deeds of the heroic, contorting the fabric of reality to fit a bigoted narrative; leading us to perceive a noble nation as fractious and contradictory, instead of a unity bound by the most noble ideals. This is the great evil of the Left. And, the Medal of Honor has become a pretext, a foil for their demented narrative. Have there been instances of racism? Certainly. Any nation, as large and complex as ours, will produce instances of inhumanity and bigotry. However, what society on the face of the earth has not? America, unlike any other nation, has enshrined the ideal of equality under the law and has made it real through the blood of its patriot sons and daughters. Through a civil war and a civil rights struggle we have gained the prize. We are all the inheritors and beneficiaries of these ideals--a classless society. It is what Martin Luther King Jr. meant when he longed for a day when a man would only be judged by the content of his character. But, this does not serve the Left, the agitator, or the useful fool who militates for the destruction of our republic and the institution of a socialist order.

I am indignant at Obama’s submersing the Medal of Honor in the urine of bigotry. This attitude is the hallmark of his administration. If Obama's objective was to honor those who performed olympian deeds, then why taint these magnificent acts with the stink of racism? In a post-racist America, what object does it serve to besmirch a solemn ceremony, except to gain the subversive advantage of perpetuating an exploitable antagonism? Melvin Morris, of Cocoa, Florida was one of the black recipients. He said that it never occurred to him that his race might have prevented him from receiving the Medal of Honor. It never occurred to him until a subtle minion whispered the calumny in his ear.

Obama has presided over one of the most divisive administrations in American history. This reality is in stark distinction to his campaign promises to foster unity. And, it is in stark contrast to the expectations of naive liberals who viewed their vote for Obama as some sort of mea culpa for white guilt. Booker T. Washington explains President Barack Hussein Obama’s race-obsession: "There is another class of colored people who make a business of keeping the troubles, the wrongs and the hardships of the Negro race before the public. Having learned that they are able to make a living out of their troubles, they have grown into the settled habit of advertising their wrongs – partly because they want sympathy and partly because it pays. Some of these people do not want the Negro to lose his grievances, because they do not want to lose their jobs.” —from My Larger Education

Reporter Zeroes in on What to Look for Next As Cuomo's Campaign of Thuggery Against Press Is Exposed
Townhall
Deranged: Blue-checked, race-obsessed 'Bishop' Talbert Swan posts 'leaked photo of Candace Owens on her wedding night'
Twitchy
'Creepy' Video Goes Viral of Andrew Cuomo Encouraging Young Female Reporter to Eat Sausage Sandwich
Redstate
Biden's Latest Verbal Slip Might Be His Most Disturbing Yet
PJ Media