It’s Time for Another Hoover Commission

John M. Palatiello
|
Posted: May 27, 2020 12:01 AM
Share   Tweet
The opinions expressed by columnists are their own and do not necessarily represent the views of Townhall.com. 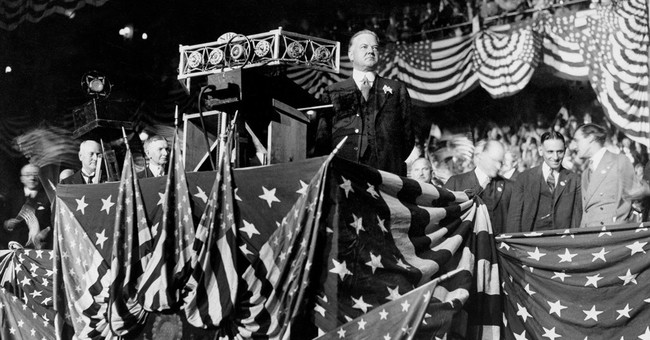 What do the U.S. Postal Service, AMTRAK, Kennedy Center, and the Corporation for Public Broadcasting have in common? All are government entities, all receive federal funds, tens of millions of dollars, in the Coronavirus Aid, Relief, and Economic Security or CARES Act, and all can and should be privatized, not subsidized.

In the past 20 years, America has faced four life-changing events – the attacks on September 11, 2001, Hurricane Katrina, the mortgage foreclosure crisis, and now the Coronavirus pandemic. Each was to a large degree a failure of government. One lesson we are learning in the current situation is that we have way too much government in normal times and not enough government in times of crisis. We have a government that’s too big to succeed.

Rather, it’s time to repeat what was done after the Great Depression and World War II.

In 1947, President Harry S Truman appointed the Hoover Commission, officially named the Commission on Organization of the Executive Branch of the Government, to recommend administrative changes in the Federal Government of the United States. It took its nickname from former President Herbert Hoover, who was appointed by Truman to serve as chairman. A Second Hoover Commission was created by Congress in 1953 during the administration of President Dwight D. Eisenhower. It also was headed by Hoover. The Hoover Commissions reviewed the growth of the Federal Government during the Depression and war and made scores of recommendations for reforms, agency and program terminations and consolidations, and other proposals to right size the government.

A similar review is needed today.  Taking a page out of President Truman’s and Eisenhower’s books, today’s commission should be co-chaired by former Presidents George W. Bush and Bill Clinton.

In the time since the two Hoover Commissions, there have been efforts to review and reform the Federal Government, but met with limited success.  During the Reagan Administration, there was the Grace Commission (formally known as the President's Private Sector Survey on Cost control), as well as the President’s Commission on Privatization.  The Clinton-Gore Administration created the National Performance Review, later called the National Partnership for Reinventing Government, an interagency task force to reform and streamline the way the federal government operates, seeking “a government that works better and costs less.” The National Commission on Fiscal Responsibility and Reform (often called Simpson-Bowles or Bowles-Simpson) was a deficit reduction effort created in 2010 by President Barack Obama. Underpinning these large-scale reform proposals are thousands of recommendations put forward by Inspectors General (IG) in Federal agencies, audits and investigations by the Government Accountability Office (GAO), reviews by the Congressional Budget Office, reports by bodies such as the National Academy of Public Administration and the National Academies of Sciences, Engineering, and Medicine, and the National Research Council, the Office of Management and Budget, the plethora of Federal Advisory Committees, and others.

While all these efforts produced sound and necessary ideas to reduce the size of government, eliminate obsolete agencies and programs, reform and improve operations and services, and save tax dollars, far too many of their proposals and recommendations have ever been implemented. Too often, these reports have been left to sit on shelves, gathering dust.

A modern commission is needed to review these heretofore neglected reforms. New oversight and investigation can determine what works and what doesn’t; what’s needed and what’s not; what is a federal responsibility and what should be done by state or local government or better yet, left to the private sector. Today, over half of the federal workforce, (excluding postal workers and uniformed military personnel) are in positions that are “commercial” in nature, meaning they duplicate or compete with functions, activities, products and services otherwise available in the private sector. Congress has banned the Executive Branch from even reviewing these activities for cost savings or performance improvement.

Such a commission can be created administratively by President Trump, or legislatively by Congress. Either needs the political will to follow through and adopt the recommendations.  One model that should be considered is the Base Realignment and Closure (BRAC) process, by which Congress created a panel of independent experts who selected domestic military bases to be closed or realigned. Once the BRAC Commission’s selections were made, they would become binding unless Congress passed a joint resolution of disapproval on an up or down vote on the package, with no cherry picking to prevent parochialism and a preference for pet projects.

The problem today is not that government taxes too little. Rather, it spends too much. Therefore, this commission, like Hoover, should focus solely on spending. Entitlements and interest on the debt are eating up too much of the tax revenue Americans send to Washington. The national debt has grown to $23 trillion, compounded by the $2.3 trillion CARES Act. National needs, such as investments in rebuilding our infrastructure, go unmet. To borrow a phrase from the 1960’s, we cannot afford both guns and butter. And we have a government that has proven incapable of responding effectively in a crisis when it is needed the most.

Action is needed before the next disaster, calamity, catastrophe, or emergency.

John M. Palatiello is a public affairs consultant who has previously served as Congressional staff and as a member of advisory committees and commissions to Federal, state and local government.  He is president of the Business Coalition for Fair Competition (BCFC).