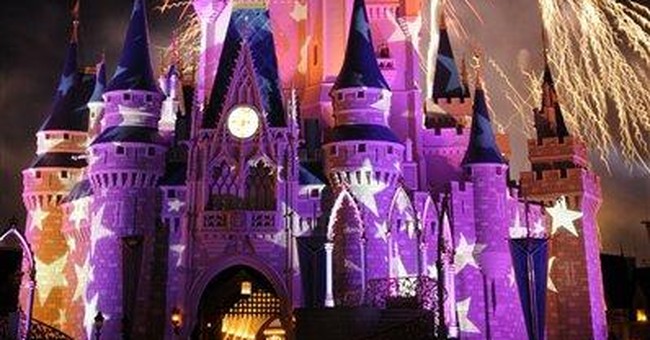 The late Walt Disney, who in testimony before Congress accused the Screen Actors Guild of being a Communist front, must have rolled over in his grave when Walt Disney Co. CEO Robert Iger reportedly spouted "[expletive] you" to Tom Borelli, director of the National Center for Public Policy Research's Free Enterprise Project, at Tuesday's annual Disney shareholder meeting.

Mr. Borelli says he just finished informing shareholders from the podium about Mr. Iger's refusal to sell the DVD or distribution rights of the miniseries "The Path to 9/11," and upon returning to his seat attempted to shake hands with Disney's CEO.

That's when the not-so-kind words were uttered. At which time Mr. Borelli says he stepped back before the microphone and quoted Mr. Iger word-for-word, which caused "gasps" from the crowd of shareholders.

"So much for the family-friendly Disney reputation," he now says in a statement released by the Washington-based conservative think tank and research foundation supportive of a strong national defense.

A two-part miniseries based on the federal 9/11 commission report, "The Path to 9/11" received seven Emmy nominations after airing in 2006 to large audiences over the Disney-owned ABC television network.

The think tank suggests Mr. Iger, who is labeled a longtime donor to "liberal politicians," considers the miniseries too embarrassing to officials who served in the Clinton administration.

In testimony Thursday morning before a House subcommittee, renowned economist Peter Morici will state that the United States "is beset by the most troubling economic crisis since the Great Depression and perhaps the most complex and difficult to resolve set of economic challenges in the peacetime history of our nation."

Furthermore, he will warn members of the subcommittee on terrorism, nonproliferation and trade that without more effective responses, the current recession "may now become a depression."

"The evidence mounts daily that the United States is in the greatest economic crisis of our times, and the ultimate place of this crisis in the history of economic disasters is yet to be determined," Mr. Morici says in his prepared statement.

The professor at the R.H. Smith School of Business at the University of Maryland says the country needs more effective stimulus packages and programs than policymakers have already pursued "to avoid a complete meltdown."

"I have never met a man for whom I have more respect and admiration than my grandfather, who was a proud union member at the local paper mill in southern Ohio where I grew up. Most of my extended family and many friends possessed a union card," Mr. Timmons informs Capitol Hill in a letter.

But "in the early part of the last century, pay was inequitable, working conditions were unhealthful and workers had no rights to grievance or bargain."

Today, the need for unionization "has diminished substantially as employers- particularly manufacturers - foster positive employee relations and understand that these relationships should be conducted in a spirit of mutual respect and fairness."

Mr. Timmons' letter follows the recently introduced Employee Free Choice Act, which he calls "one of the most direct threats to economic growth and job retention and creation," including barring employees from using secret ballot voting when deciding whether to join a union.

"I've lived through '64, '74 and '92. In '64 we were beaten so badly people talked about whether the party had a future. By '66, Lyndon Johnson had gone so far to the left and spilt the Democratic Party and we gained 47 House seats and picked up a bunch of governorships and Senate seats. Since 1968 you have not elected an overt liberal in 40 years. In '74 to '76, we had Watergate and a bad recession and then a Reagan-Ford nomination fight. In that period, only 17 percent of the country identified itself as Republican and yet four years later, Reagan won a smashing victory and Carter collapsed under a bad economy. In '92, Bush, having thrown away the fiscal conservatives by raising taxes, lost the three-way race and, two years later, we gained the House for the first time in 40 years and kept it. I know how fast the country can switch."

- Former House Speaker Newt Gingrich, reminding Newsweek's Eleanor Clift that the nation's political landscape can change at the drop of a dime