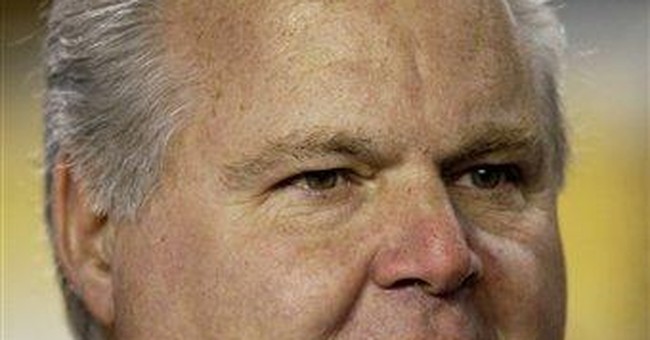 "Minority Leader Limbaugh" is the headline of an op-ed by political consultant David Plouffe, who you will recall was the campaign manager for Obama for America and Obama-Biden 2008. He is just the latest in a long line of outspoken Democrats declaring right-wing radio host Rush Limbaugh the new leader of the floundering Republican Party.

That said, and in the wake of newly crowned Republican National Committee Chairman Michael S. Steele apologizing to Mr. Limbaugh this week for labeling him a mere "entertainer," we will recall that only last November a soon-to-retire Republican Sen. Chuck Hagel similarly complained that the Republican Party was being "educated by the great entertainers like Rush Limbaugh."

During his speech in Washington, the Nebraska Republican said: "You know, I wish Rush Limbaugh and others like that would run for office," sarcastically opining that such pundits "have so much to contribute and so much leadership and they have an answer for everything."

But in reality, the senator continued, Mr. Limbaugh and other conservative mouthpieces like him "try to rip everyone down and make fools of everybody, but they don't have any answers."

"There has been a lot of use of the term 'pork barrel' lately," Washington historian John Lockwood can't help but observe, referring to the billions in spending doled out by President Obama and the Democratic leadership.

Mr. Lockwood tells us he's been digging through old books and newspapers to find out when "pork barrel" first appeared in its present context. "I found the term was being widely used by the 1880s," he reveals.

In fact, the Dirksen Congressional Center educates "pork barrel" became a political reference in the post–Civil War era, derived from the plantation practice of distributing rations of salt pork from wooden barrels. These days it's used to describe legislation loaded with special projects for lawmakers to distribute to constituents, courtesy of the federal taxpayer.

Back to Mr. Lockwood, the earliest use of the phrase he found was published in the New York Times on May 9, 1884. The historian forwarded a copy of the clipping, headlined "Wrangling in the House" (suffice it to say, the House of Representatives, historically speaking, is a confused bunch):

"Mr. Singleton made a fruitless effort in the House of Representatives today to call up the bill providing for a new building for the Congressional Library. Mr. Holman objected to the consideration of anything but appropriation bills, and the result was a struggle which lasted over an hour.

"Mr. Ellis was anxious to call up the bill lending $1 million to the New Orleans Cotton Exhibition, and so he helped to keep back the Library bill. Mr. Reed joined Mr. Singleton in pleading for the latter measure, and Mr. Stockslager added to the confusion by trying to open the public buildings pork-barrel.

"So many motions were made that the friends of the Library bill lost their reckoning and voted against their own motion, thinking they were opposing Mr. Stockslager. When the mistake was discovered Mr. Singleton moved a reconsideration of the vote. Mr. Ellis promptly proposed to table this motion, and by a vote of 134 to 34 this was done.

"Then the House went into Committee of the Whole, and there was another long wrangle, ending at last in a victory for Mr. Ellis."

NO MALIBU FOR YOU

On the heels of our monetary comparisons of Wednesday of how much is $1 trillion, Rep. Ted Poe, Texas Republican, provides his take of a "1 with 12 zeros behind it."

One trillion dollars, he says, "will buy you 36 million Chevrolet Malibus. It's spending $1,000 a day at the mall for 2.5 million years. Or it will pay the college education for every high school graduate for the next 10 years."

Fresh from its successful campaign to end the ban on photos of returning fallen military at Dover Air Force Base, a large group of "progressive" veterans, as they call themselves, has launched a campaign to end the military's "Don't Ask, Don't Tell" policy.

Enacted in 1993, the policy seeks to discharge members of the military who are homosexual. A bill was reintroduced in recent days by Rep. Ellen O. Tauscher, California Democrat, to do away with the policy.