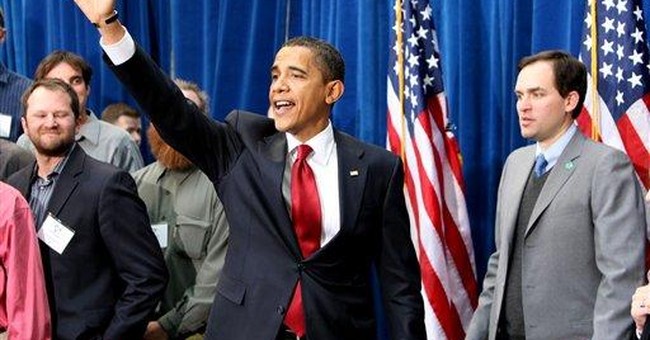 "Has anyone noticed that it's taking the president longer to select the White House dog than to pick his Cabinet?" writes Inside the Beltway reader J. Griffin Crump of Alexandria. "Could it be because he will feel obligated to keep the dog?"

The only winner, if indeed there was one to emerge from the Republican Party's 2008 bid for the White House, appears to be "Joe the Plumber."

"That's right, 'Joe The Plumber', 'Joe The War Correspondent', 'Joe The Beltway Reporter', and now 'Joe The Author' is coming to your city for a book signing!" proclaims the publicist of a new book by Joe Wurzelbacher.

Washingtonians can get signed copies at various times and locations (suburbs included) from Feb. 25 to 28, when the campaign sensation will be in town for CPAC, the Conservative Political Action Conference. Then he's off to Ohio, Wisconsin, Indiana, Kentucky, Tennessee, Texas, Arizona and California, before coming back to Washington to be a special guest of honor at the Media Research Center's 2009 gala.

After all, as his fan Sean Hannity of Fox News says, "He is truly a great American."

"Seats remained unfilled at the main venue even when Rev. Al Sharpton began" his speech, observes Middlebury Campus reporter Jaime Fuller, even after the college "made many preparations providing for an overflowing audience."

Indeed, the liberal arts college in Vermont fed the civil rights activist's remarks into two additional campus auditoriums, but the crowds were a no-show - perhaps in anticipation "that Sharpton's remarks would be inflammatory," the article notes.

"I will not overwhelm you because I understand you have a controversial speaker here tonight," Mr. Sharpton began. "If there are those who disagree with me, or don't like me, I would hope at the end of the night they get a good night's sleep because I assure you, I will."

He went on to say that the election of Barack Obama as the nation's first black president is an invalid reason for a return to complacency.

"Many feel that because we have had a huge historical momentous occasion with the election of Barack Obama, that all of a sudden we no longer need advocacy, and this could not be further from the truth," Mr. Sharpton said. "Fox News ... now announces we are beyond race, when they said we never had a racial problem in the first place. How does my good friend Sean Hannity preach the funeral of a body that he said there never was?"

Mr. Sharpton also expressed distaste for former Secretary of State Colin L. Powell, whom he characterized as being "of my color, not of my kind."

So reads the Canada Free Press cover story by former Toronto Sun veteran columnist Judi McLeod, who says an international network of environmental groups is horning in on the agenda of President Obama's one-day inaugural trip to Canada on Thursday.

The environmentalists are warning Canadians that Mr. Obama, to satisfy his country's gluttonous energy addiction, is coming after its "resources."