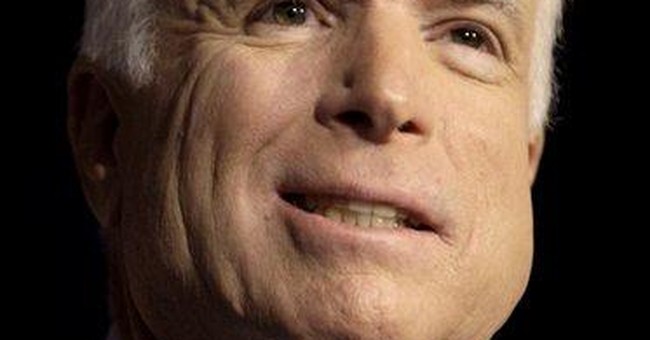 Between now and midnight Monday, anybody who makes a contribution to Sen. John McCain's White House bid qualifies to ride for an entire day with the Republican candidate aboard his campaign bus the Straight Talk Express.

"You will be entered to ride the bus with me by making a donation of any amount," Mr. McCain offers.

Not to be outraised, presumptive Democratic nominee Sen. Barack Obama is promising a car magnet, of all gadgets, to supporters who send him at least $15 by Monday night.

That would be the lead singer of the Smithereens, Pat DiNizio, providing entertainment in the courtyard of the House Rayburn Office Building on Capitol Hill Thursday evening.

Hosting a barbecue with chicken (price up about 6 cents per pound), pork (up 2 percent) and beer (there's always Milwaukee's Best), FoodPriceTruth.org argues that the rising price of oil is what's taking a bite out of America's grocery budget.

Worse yet, the group says "major food companies like Kraft, Kellogg and General Mills are profiting from the recent hike in food prices, at your expense."

Perhaps the best news: the food, beer and entertainment, on Capitol Hill at least, are all free.

Gas and food prices got you down - or angry? Consider Colin Powell's 13 golden rules when faced with adversity.

1. It ain't as bad as you think. It will look better in the morning.
2. Get mad, then get over it.
3. Avoid having your ego so close to your position that when your position falls, your ego goes with it.
4. It can be done!
5. Be careful what you choose. You may get it.
6. Don't let adverse facts stand in the way of a good decision.
7. You can't make someone else's choices. You shouldn't let someone else make yours.
8. Check small things.
9. Share credit.
10. Remain calm. Be kind.
11. Have a vision. Be demanding.
12. Don't take counsel of your fears or naysayers.
13. Perpetual optimism is a force multiplier.

With same-sex weddings as the uncomfortable political backdrop, Democrats are stepping out in force to headline Thursday night's Gay and Lesbian Leadership Council (GLLC) Gala at the Waldorf Astoria in New York City.

As for the presumptive Democratic presidential nominee Sen. Barack Obama, he's carefully treading around the issue of same-sex marriage, trying to appease all sides, as most politicians do. In short, Mr. Obama opposes gay marriages, but at the same time opposes any future constitutional amendment to ban them.

Danielle Crittenden, author of "What Our Mothers Didn't Tell Us: Why Happiness Eludes the Modern Woman," will deliver the keynote address in Washington Friday to a gathering of self-described "countercultural women" from several of the nation's top universities.

The ladies are in town for the third annual Network of enlightened Women (NeW) National Conference at the Heritage Foundation. Time magazine calls NeW the "fast-growing campus alternative to the Feminist Majority and the National Organization of Women (NOW)."

We're told Ms. Crittenden will argue that many feminist ideas, such as blaming men and pursuing independence at all costs, have failed women. Three NeW chapter presidents leaders, meanwhile, say they will discuss the group's impact in the 2008 presidential election "among Generation Y voters by rebutting feminist orthodoxy, such as the claims of rampant sexism and the 'glass ceiling' made by Hillary Clinton and Michelle Obama."