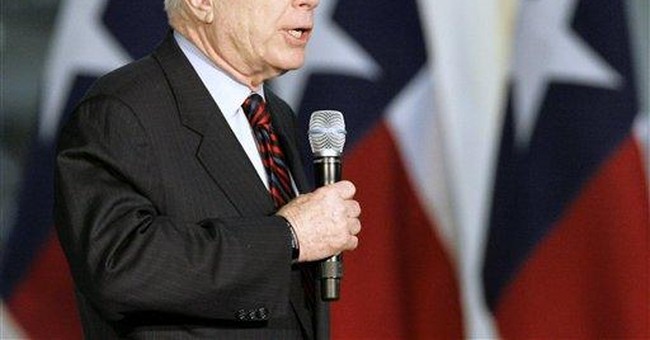 Retired U.S. Army Maj. Gen. Paul D. Eaton, dubbed the Father of the Iraqi Army for "building an army that wasn't there," says Sen. Hillary Rodham Clinton is more the commander-in-chief than her husband was when he began his two presidential terms.

And as for Republican presidential candidate Sen. John McCain, who was a Navy pilot and held as a prisoner of war, he doesn't even rate an honorable mention in the retired general's playbook.

"As I think about the challenges facing the nation and having been in uniform for almost 30 years, worked with a number of presidents to include the last four, I can't think of a single person ... who is better qualified to walk into the Oval Office than Hillary Clinton," the former commanding general of the Office of Security Transition said in a video posted yesterday on Mrs. Clinton's presidential campaign site.

"I don't make that statement very lightly. She is more qualified, in my view, than her husband, Bill, was when he entered the office."

The Internet's unprecedented role in the 2008 presidential campaign seems to mirror the candidates' rise and fall of popularity in the polls.

Spock, which dubs itself the Web's leading people-search engine, reports that Democratic presidential candidate Sen. Barack Obama in the month of February "received a 20 percent increase in search volume, while Hillary Clinton experienced an overall decline."

And in just the first few days of March, Spock says "search traffic to Barack's site has increased 233 percent and his current site traffic has generated over 800,000 more hits than Hillary's."

Figuring what's at stake, it ought to be either Sen. Barack Obama or Sen. Hillary Rodham Clinton referring to today's round of presidential-primary voting as the "Second Super Tuesday."

Instead, it's Republican Sen. John McCain who has given such a title to the importance of today's votes to be cast in several states that include Texas and Ohio. The Arizona senator needs just 101 more delegates to become officially the Republican Party's nominee.

Meanwhile, a peek into the Illinois senator's presidential campaign Web site finds his supporters have taken to playing "Obama Jeopardy" at fundraising parties, exchanging whatever trivia is known to date about the relative political newcomer, who wasted no time running for president.

The America Foreign Policy Council has lined up Mr. McFarlane to speak on missile defense and U.S. security at its seventh annual conference next Monday from 9 a.m. to 1 p.m. in Room 902 of the Senate Hart Office Building.

Among other speakers is Sen. Jon Kyl, Arizona Republican and ranking member of the Senate subcommittee on terrorism, technology and homeland security.

This just in: His Holiness the Dalai Lama will be climbing Colorado's Rocky Mountains this summer to keynote an Aspen Institute symposium that "embraces Tibetan and Himalayan art, culture, science, medicine, spiritual practice and history."

The institute says its unique three-day program, to be held in July, will feature eminent Tibetan Buddhist scholars, practitioners and tradition-bearers.