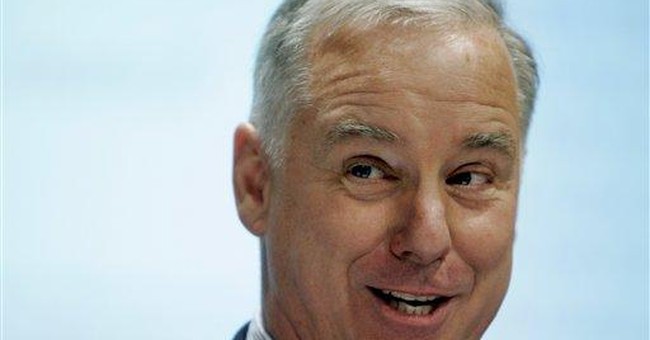 Now that the New York Times' ombudsman Clark Hoyte is blasting his own newspaper for insinuating last Thursday that Republican White House hopeful John McCain had a fling 10 years ago with a female lobbyist 31 years his junior, is anybody out there sticking by the story?

"It's like 1989 all over again — John McCain has been caught in yet another ethics scandal," insists Democratic National Committee Chairman Howard Dean.

The DNC head says everybody seems to be "ignoring the ethics lapses the team of reporters had uncovered."

"The fact is, John McCain is facing legitimate questions about lobbyists, favors, and campaign contributions, just as he did during the Keating Five scandal that nearly derailed his political career 20 years ago."

Mr. Dean goes so far as to call whatever relationship it was that the Arizona senator and lobbyist Vicki Iseman shared a decade ago "disgusting."

Mr. Hoyte opined yesterday that the newspaper "found itself in the uncomfortable position of being the story as much as publishing the story, in large part because, although it raised one of the most toxic subjects in politics — sex — it offered readers no proof that McCain and Iseman had a romance."

An appreciative crowd was on hand Friday at the Royal Netherlands Embassy, which hosted a reception to honor the city of Norfolk, Va., and its soon-to-be-crowned 2008 Queen Azalea, a striking Dutch blonde who has quite the military combat background.

It's Norfolk's 55th International Azalea Festival, an annual salute to NATO. And this year, Royal Netherlands Army Capt. Mariola Kasemier, who recently returned from deployment in Afghanistan, has been selected to represent her country as Queen Azalea — the first active-duty service member to hold the title.

"Unfortunately, it wasn't always pretty," she says of her deployment in the war against terrorism. "Our missions were 'build where possible, fight if necessary.' Even that last part came up multiple times. I have been part of numerous fights, in which I have had to fire shots ... . These moments will stick with you forever."

"I have seen with my own eyes what NATO can do in the world," she says. "I don't think you can imagine what Afghanistan is going to be like. It's different than anything you can imagine. It is an experience I will treasure for the rest of my life."

Her coronation in the Norfolk Botanical Gardens will take place April 18.

U.S. Archivist Allen Weinstein is "pleased" that President Bush, in his proposed 2009 federal budget sent to Congress, seeks to increase the National Archives' operating expenses by more than $10 million over the 2008 appropriation.

Then again, as Mr. Weinstein points out, a good chunk of the additional funding will pay for staff and resources for the George W. Bush Presidential Library project.

Whether they support him to become president or not, Inside the Beltway readers are intrigued by Barack Obama's name.

Such is our conclusion after we reported that "obama," in its many variations, is the newest word to enter the English language, says the Global Language Monitor (GLM), which tracks the growth and evolution of spoken English around the globe.

Reader Paul Lund now writes: "If Obama presides, we would become an 'obamanation.' Has that one been coined yet?"

"How about 'abomination' for how bad his policies will be for our economy?" says D. Freeman, whose list also includes "obamasaurus," for how our country became extinct under his stewardship, and "obamatastrify," for "the devastating effect an Obama presidency will have when we're attacked again."

T. Jazzy writes: "I prefer my own term 'obamagantry' to describe our latest entry in the 'Savior of America Sweepstakes.' When I have heard him speak, I have envisioned the collection plates going 'round while a choir sings, 'Oh, Happy Day.' I am, however, a former resident of Chicago, born and raised during the [mayoral] reign of Richard J. Daley. My experience there taught me above all else never trust any Chicago politician ... . Be careful what you wish for; you may get it."