Is Klaus Schwab the Most Dangerous Man in the World?

John Mac Ghlionn
|
Posted: Apr 10, 2021 12:01 AM
Share   Tweet
The opinions expressed by columnists are their own and do not necessarily represent the views of Townhall.com. 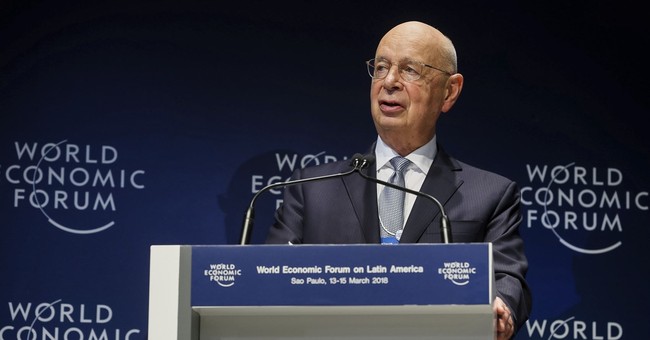 Internationally, levels of personal freedom continue to decrease; COVID has, of course, played a role, but the downward spiral started long before the pandemic.

For freedom to flourish, democracies are required. Around the world, however, established democracies are in decline. Again, the decline was occurring long before the pandemic hit.

If in doubt, please read the following:

These are not lines from an episode of “Black Mirror.” No, these lines come directly from the World Economic Forum website. Founded in 1970, the World Economic Forum (WEF) is arguably the most influential platform in the world. Each year, some of the most influential figures in politics and tech gather for a meeting in Davos. The most recent meeting occurred in January, and the topics discussed are of profound importance.

As Anthony P. Mueller, a professor of economics, warns, “The main thrust of the forum is global control. Free markets and individual choice do not stand as the top values, but state interventionism and collectivism. Individual liberty and private property are to disappear from this planet by 2030.”

Not me, you say. I didn’t sign up for this. In the world of biopolitics, where the lines between human biology and politics become indistinguishable, your vote really doesn’t matter. In fact, you don't have a vote. This isn’t the same loss of freedom that, say, the likes of Alexei Navalny is experiencing right now. No, this loss of freedom is attritional in nature; death by a thousand cuts.

Now, before I am accused of conspiratorial thinking, let me point you in the direction of The Commons Project. Supported by the WEF, The Commons Project is in the process of creating mandatory vaccine passports. According to the project’s site, for “travel and trade to return to pre-pandemic levels, travelers will need a secure and verifiable way to document their health status as they travel and cross borders.  Countries will need to be able to trust that a traveller’s record of a COVID PCR test or vaccination administered in another country is valid.” In order to travel internationally, millions of people will have no option but to acquiesce. Are humans becoming nothing but algorithmic afterthoughts?

The writing is very much on the wall, and it reads: Obey your Master.

One could argue that master’s name is Klaus Schwab, the founder and executive chairman of the World Economic Forum.

When we think of dangerous people, we tend to think of men with guns, or Charles Manson types sporting maniacal grins. However, if COVID has taught us anything, it’s that the greatest dangers are invisible. We never see them coming, and there’s little we can do when they arrive. The most dangerous people today are not the ones armed with guns; they are the people armed with ideas.

On the WEF website, Bill Gates and Eric Schmidt, the former head of Google, are ominously listed as agenda contributors. Klaus Schwab, though, is the agenda setter.

What does his agenda entail?

In 2018, the German wrote a book called Shaping the Fourth Industrial Revolution.

With the merging of physical, digital, and biological worlds, this revolution is like nothing that came before. All other revolutions relied on human input. This revolution, however, eliminates millions, if not billions, of people from the employment equation.

If you are skeptical, please feel free to check out Stretch, the robot, Amazon’s latest design. It can move up to 800 boxes per hour. Furthermore, it requires no payment, validation, sick leave, or health insurance. It’s hyper-efficient. It doesn’t talk back. And Stretch doesn’t need a bathroom break.

Although the tech gurus regularly discuss the ways in which technology will help humans (instead of replacing us), there are plenty of reasons for concern. When it comes to matters of employment, psychiatrists, lawyers, scientists, and other top-tier professions appear to be safe, but those involved in manufacturing, retail services, courier services, and general transportation (bus drivers, taxi drivers, lorry drivers, etc) certainly aren’t. In other words, people who generally lack a college degree. Considering only 6.7 percent of the world’s population are college educated, the future looks bleak.

While the eradication of some jobs is both necessary and laudable, most jobs are not inherently dangerous. They give people a sense of purpose, and a sense of purpose is essential to living life to its fullest. Universal Basic Income (UBI) may help to put food on the table, but it can never address the problem of purpose. Where will our purpose come from when so many jobs are gone?

The disingenuous “retrain the masses” arguments simply don’t work, either. Retrain people for what?  In the future, with recursive self-improvement, AI systems will be able to learn from their mistakes and ultimately become smarter. No need for human input. In fact, no need for humans.

What is the final goal? Utopia, we’re told. But remember, the Greeks defined utopia not as a heavenly place, but as “no-place.”

And this seems fitting, as in the future, there simply won’t be any place for millions of humans to go. If in doubt, just ask Klaus Schwab, the most powerful – and arguably, the most dangerous - man in the world.