John Loudon
|
Posted: Jun 30, 2018 12:01 AM
Share   Tweet
The opinions expressed by columnists are their own and do not necessarily represent the views of Townhall.com. 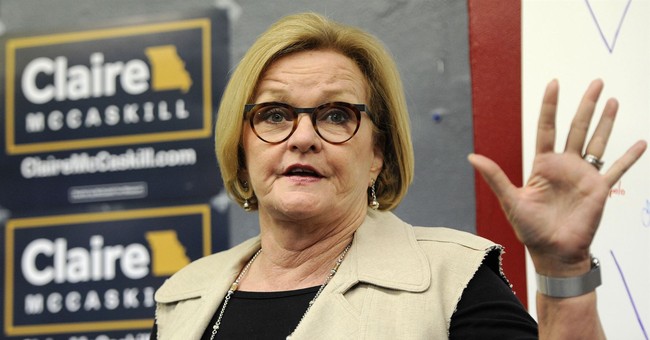 Can you imagine the pain of having to use your private jet because you broke your thousand-dollar tablet and couldn’t stand a creaky drawer in your luxury RV?

Such is the rough life of U.S. Senator Claire McCaskill.

Senator McCaskill’s phony campaign RV tour — parts of which she spent traveling on her private jet — definitively demonstrates how out of touch she is with hard working Missourians.

When confronted with evidence of her dishonesty about her private jet, McCaskill whined, "I added some stops with the use of the plane, but I was on the RV so much that the broken drawer drove me crazy. I even lost an iPad around a corner on the RV.”

Senator McCaskill believes a squeaky drawer and a busted iPad justify taking an expensive private plane on a supposed RV tour. Meanwhile, there are many Missourians who can’t even afford an iPad in the first place, much less a luxury RV or private jet.

McCaskill’s deep detachment from the lives of normal Americans is reflected not just by her travel arrangements, but more importantly, by her voting record.

For instance, she voted against President Trump’s historic tax cuts, which put money back in the pockets of working Missourians and their families. The President’s tax reform expanded the child tax credit, doubled the standard personal deduction, and reduced income tax rates across the board for the middle class.

Senator McCaskill tried valiantly to defend her use of a private plane. She said she shouldn’t have to apologize for “paying on my own dime to visit more Missouri veterans.” Maybe she should apologize for trying to deprive those veterans of the money President Trump’s tax plan saved them.

Tax reform isn’t the only area where Senator McCaskill demonstrates how out of touch she is with average Missourians.

The Senator voted against President Trump’s immigration compromise in February, even though two-thirds of Americans supported it. She also opposesthe President’s efforts to fix an international trade system that has seen American manufacturing and farming decimated by foreign cheating. This is why Missouri’s net farm income dropped from $3.2 billion dollars in 2008 to $1.5 billion by 2015.

McCaskill stood in the way of President Trump’s efforts to fix the country’s healthcare system that she and her Democratic peers messed up so badly. Thanks to Obamacare, individual health insurance premiums in the state rose by double digits this year.

McCaskill may like to pretend she’s not like the extreme members of her party who inhabit Washington D.C., New York, and San Francisco, but her voting record suggests otherwise.

For years, Democrats like Claire McCaskill have pretended to be the party of working people, all while creating conditions that have gutted America’s middle and working classes. McCaskill fought President Trump’s efforts to give money back to average Americans and is fighting his efforts to build an international market that is actually fair for American workers.

Unlike McCaskill and her Democratic colleagues, President Trump is actually working to make America a great place for all Americans, not just elite interest groups and wealthy senators who can afford to take a private plane on a “bus tour.”