Before November, America Must Know More About Trump-Russia Probe

John Kass
|
Posted: May 21, 2020 12:01 AM
Share   Tweet
The opinions expressed by columnists are their own and do not necessarily represent the views of Townhall.com. 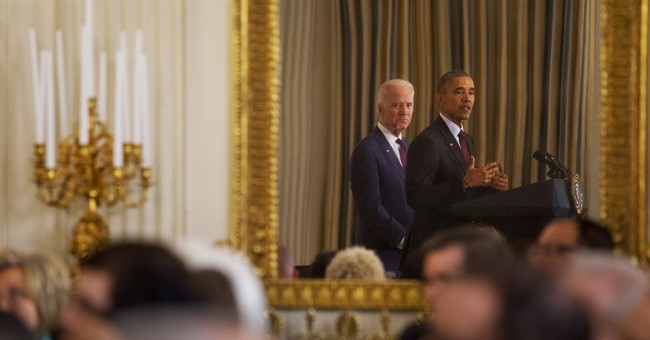 A recent headline in The New York Times -- a paper of record for the anti-Trump Resistance -- was adamant:

Reading that, you might come away believing that Attorney General William Barr had just brushed off President Donald Trump's much-tweeted Obamagate theory. Trump insists the now-discredited Russia collusion probe against him was an Obama scheme.

Only one problem with the headline: Barr didn't dismiss it. Barr did not say there was no plot.

He did not say that former President Barack Obama or his vice president, Joe Biden -- now the presumptive Democratic nominee -- had nothing to do with it.

The Russia collusion investigation tore the country apart. It cost some $40 million and lasted almost three years, leading to partisan impeachment proceedings against Trump, which failed to result in a conviction. Run by special counsel Robert Mueller, it found no credible evidence to accuse any American with colluding with Russia in the 2016 election.

But the hysterical media and partisan finger pointing that came with it did accomplish something of value.

Despite the Times' headline, and much of the media coverage over Barr's remarks, all Barr said was that he did not anticipate, based on what he knows now, any criminal investigations into Obama or Biden.

But if you search the negative space between what happened and what may come, you'll see evidence of the panic among Obama's servants, his Washington Kemalists. Like their namesakes in Turkey years ago, they acted as if their mission were to protect the state against the will of the people, elections or no elections, and keep their hold on awesome power.

These include Obama's former CIA director, John Brennan, former FBI chief James Comey, former FBI counterintelligence boss Peter "Insurance Policy" Strzok. The list is long. If there's anyone in this crew who looks like he'll wear the jacket for it, it's Strzok.

If I were casting the movie, I'd have Strzok played by Edward Norton, an actor renowned for releasing his inner weasel.

I'm writing this from Chicago on a rainy day, not from the Washington Beltway. But if I might borrow from Strzok, I'd say you can smell the fear on them from here.

The news buzz is all about Trump taking hydroxychloroquine to ward off the coronavirus, and the pandemic fills the American bandwidth. But the story of Obama's Kemalists continues. This is why Obama and crew are outraged and busy whipping up their useful idiots. They can see what's coming.

What's already come out in just a few weeks is a saga papered with lies peddled by spymasters and politicians to journalists. Some former spymasters testified under oath before Congress that they had no evidence on Trump-Russia collusion, then eagerly went out on cable news for pay to shout that Trump was a tool of Vladimir Putin.

There were lies supporting the now-discredited Steele dossier paid for by the Clinton campaign, and lies to the FISA courts, and the Obama administration's political unmasking of Trump's first national security adviser, Michael Flynn.

Flynn pleaded guilty to lying to the FBI about his conversation with a Russian diplomat. His champions say he was pressured by federal threats against his son. Barr dropped the case and called it a trap. There were a series of serious prosecution errors, including an FBI official wondering in a case file if agents were questioning Flynn to "get him to lie, so we can prosecute him, or get him fired."

Some Obama supporters, including former prosecutors, offer the dissenting view. They're adamant that dropping the Flynn case would cast a shadow on all political corruption cases. Others, including me, think the targeting of Flynn was all about getting him out of the way, so the Kemalists could proceed against Trump.

Pressure is being applied. People will flip. Some editors of newspapers that received Pulitzers for covering the now-failed Russia collusion saga may think about assigning investigative reporters to walk back this cat and find out just who kept giving it milk. But time is growing short.

It should be carved into the walls of the planned multimillion-dollar Obama Presidential Center in Chicago, or as I call it, The Obama Temple of Adoration and Fealty.

"Over the past few decades there have been increasing attempts to use the criminal justice system as a political weapon," Barr said, clearly referencing both Republican and Democratic Party excesses.

"The legal tactic has been to gin up allegations of criminality by one's political opponents based upon the flimsiest of legal theories," Barr said. "This is not a good development. It is not good for our political life and it's not good for the criminal justice system. And as long as I'm attorney general, the criminal justice system will not be used for partisan political ends; and this is especially true for the upcoming elections in November."

That is as it should be.