John Kass
|
Posted: Apr 16, 2020 12:01 AM
Share   Tweet
The opinions expressed by columnists are their own and do not necessarily represent the views of Townhall.com. 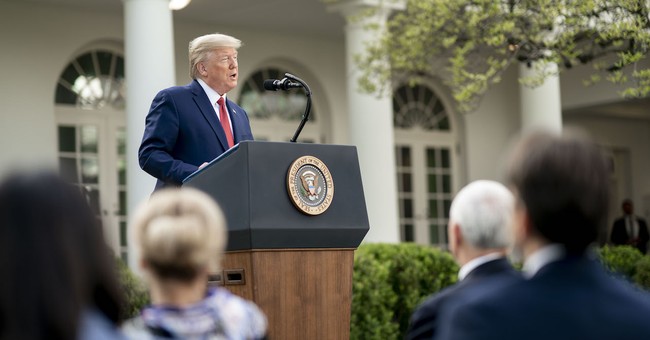 If there is one benefit from the coronavirus pandemic, it is that the establishment news media -- which is overwhelmingly liberal and loathes President Donald Trump and his more than 60 million voters with a passion -- have finally done something quite counterintuitive.

They consulted an old document they'd long forgotten: the Constitution.

And now they embrace federalism.

Members of the Washington-based Democratic Media Complex have insisted for years that Trump was a dictator. Yet when the coronavirus hit, weren't these TV show ponies whimpering that he wasn't enough of a dictator?

As Trump's daily White House coronavirus briefings keep the focus upon him, much to the dismay of newsies of the left, it is the governors and some mayors who are acting like true coronavirus dictators.

Many local officials of both political parties offer reason and restraint in combating the virus. But some use a heavy hand, issuing edicts and executive orders without benefit of laws written by state legislatures.

In the Michigan of Gov. Gretchen Whitmer -- the new poster child of capricious authoritarian rule -- you can't buy tomato plants for your backyard garden. You may float along in a sailboat or kayak, but if a laid-off autoworker dares take his motorized bass boat out for some solitary fishing, he is in violation.

Whitmer's bitter whimsies have triggered growing statewide protests. This is what happens when people are bossed around on whim.

Without benefit of written law, voted upon by state legislators and signed by governors, executive fiat leaves too much open for interpretation. It is disastrous for the protection of civil liberties.

Whitmer and other governors are the sideshow now. Trump's daily coronavirus news briefings in Washington are the main event. Millions of Americans watch in fascination as Trump brushes past his administration's initial slow response to the virus, and those White House reporters eager for the spotlight play their endless juvenile game of "gotcha," repeating the same questions over and over, fanatics in pursuit of Orange Man Bad.

Yet even frenzied hysterics are sometimes right.

It was that recent Trump-media brawl at a White House briefing a few days ago that led them to it. Trump rolled clips of cable news pundits dismissing the threat of coronavirus early on. Some networks cut away with great shrieking and pearl clutching.

It seems that it was then that a new admiration for the Constitution began to blossom.

"When somebody's president of the United States, the authority is total, and that's the way it's gotta be," Trump said, absurdly. That is categorically wrong.

Tribal Republicans who defend this do themselves no favors. If President Barack Obama had said the same, Republican and conservative heads would have exploded from sea to shining sea. Unemployed janitors would have been deemed "essential" to scoop up the remains.

But Trump's announcement did compel some journos to look at the Constitution. Some may have even been forced to re-examine their faith in the power of the federal government, which they've cleaved to and reinforced for decade upon decade, as the federal authority and its unelected bureaucracy grew and grew, becoming (dare I say it?) the leviathan we know today.

The antidote, of course, is found in the 10th Amendment, which tells us that the powers not delegated to the federal government by the Constitution, nor prohibited by it to the states, are reserved to the states and to the people.

But then in Mississippi, the powers ruled that going to church on Easter Sunday -- sitting in your car in a parking lot -- was subject to a fine. In Kentucky, U.S. District Court Judge Justin R. Walker had to intervene to stop Louisville Mayor Greg Fischer from ordering Christians not to attend Easter services, even though they, too, planned to remain in their cars.

"An American mayor criminalized the communal celebration of Easter," wrote Walker. "That sentence is one that this Court never expected to see outside the pages of a dystopian novel, or perhaps the pages of The Onion."

The mayor's decision, Walker wrote, "is stunning," and "beyond all reason."

In Colorado, a man was arrested for playing catch with his daughter. A Philadelphia man was hauled off a bus for not wearing a mask, though there was no law about masks.

In Illinois, Gov. J.B. Pritzker remains busy, ripping on the White House, reinforced by supportive media, worrying about his badly mismanaged state's lack of a rainy day fund and downplaying questions about a poll worker in the March 17 primary -- which Pritzker had insisted on holding -- who later tested positive for the coronavirus and died.

Unfortunately for Pritzker, he's spent much time posing for news cameras and less time getting his state government in order. Illinois is unprepared to handle the rush of unemployment claims.

As a federalist myself, I'm pleased that media high priests have a newfound appreciation for limited federal powers. I predict this will last up until the minute a Democrat is elected to the White House.

In the meantime, there is real need for state legislatures and for Congress to write laws rather than rely on executive whim. The people are becoming tired of whim. They want to work. They want their lives back.

They are getting ready to bolt. And if they do, the governors and the mayors can point the fingers at themselves, whimsically.