John Kass
|
Posted: Nov 15, 2016 12:00 AM
Share   Tweet
The opinions expressed by columnists are their own and do not necessarily represent the views of Townhall.com. 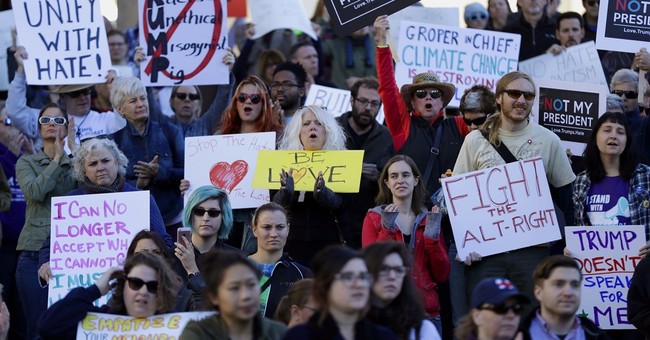 Americans are so sick of politics right now that merely mentioning a phrase like "let's get rid of the Electoral College" might compel some to stick pins in their eyes.

Please! Don't harm yourselves! Besides, eye stabbing is just too darn chock-full of drama.

So what if I threw in a version of an American future without the Electoral College just to liven things up a bit?

Think of an America with happy, prosperous people living on the East and West coasts, a people secure with great educations, manners, entertainments, wealth. And amenities that come with such a cool future, like driverless cars, humanoid robots and unlimited data directly transmitted to chips embedded in your skulls.

And what of the "heartland," which politicians privately call "flyover country" but which you and I still call the Midwest?

Gaunt faces, old clothes, bleak horizons. A giant electrified fence stretching across what were once called "states" but are now called "districts." And each district ruled by a governor appointed by the president.

And great mud holes where the Great Lakes used to be, and skinny teenagers hunting critters with bow and arrow to put meat on the table.

Is that possible? Probably not.

I apologize for even typing such a stupid idea and for foolishly mixing presidential politics and sci-fi. One is reality, the other is pure fantasy. My bad.

In reality, for example, President Barack Obama and President-elect Donald Trump just met in the White House and had a long friendly talk, smiling and saying kind things about each other, and what's so darn fantastical about that anyway?

My excuse is that it's been a long political season and nerves are frayed, and now Americans are once again talking about getting rid of the Electoral College.

They're not screaming about it. People are talking about it rationally, thoughtfully, civilly.

It happens in close presidential elections, especially when the victor, in this case Trump, wins the electoral votes but loses the popular vote, in this case to Hillary Clinton by about 200,000 ballots at last count.

She received more votes. He won more states, thus winning the electoral votes from those states, as is the law.

Is this really fair? Or is it some dusty trick from some faded document, allowing the elites to enforce their will upon us again and again?

With Clinton losing the electoral vote and winning the popular vote, as did her fellow Democrat Al Gore a few years ago, many Americans are offering reasons why we should just throw the Electoral College in the garbage and let the popular vote prevail.

"It is only fair," said a friend. "Every vote counts. And the candidate with the most votes wins. What's wrong with that? It's called democracy."

That's what it's called all right: Democracy, which means either the "rule of the people" or "rule of the mob," depending on whether you just liked the songs in "Hamilton" or actually read his stuff.

Democracy started in ancient Athens, when citizens (and citizens only) could cast pebbles and decide things. And majority rule has been the operative phrase. And why shouldn't the majority rule? Why should minorities like tiny "Live Free or Die" New Hampshire have sway over populous California?

Even Trump once despised the Electoral College and said we should get rid of it.

"The Electoral College is a disaster for a democracy," he tweeted in 2012.

Naturally, Trump didn't tweet his anti-Electoral College dreams when he won the presidential election over Clinton.

Yet thoughtful people who voted for Hillary are making the case and doing it well.

"I think it is antiquated," wrote a reader from Naperville, Illinois. "Why deny a large group of people their voice by not counting their vote? My priority is still to count only the popular vote. What do you think?"

Nice, but when people ask me "what do you think?" I'm inclined to tell them, and often they're displeased.

There is merit to the idea of a popular vote for president. It would certainly be efficient and speedy, especially with our advanced technology. The problem is that in some things I opt for inefficient and slow. Yeah, I'm weird like that.

I'm not even a big fan of early voting. I figure that if voting is actually important to you, then you'll get up on Election Day and get your butt down to the polling place and cast a ballot in person.

Still, if we got rid of the Electoral College, think of the shape of things to come. Soon after, we could have immediate national referendums on almost every important issue. And depending on America's mood, we could swing quickly, one way or another, this way and then back again.

We wouldn't need a House of Representatives or a Senate. Legislation takes too long. The president could appoint governing bureaucrats who would move with great speed. States wouldn't count for much, if anything. They'd disappear eventually, as would the idea that the people of Kentucky might see things differently than the people of New York.

The populated coasts would become supreme. And if California got passionate and wanted Great Lakes water, we'd have a quick national vote on it. Bingo. A pipeline to drain the lakes, and it's done.

We'd have real democracy for a change. And the majority would rule. And that ancient experiment called a republic, designed to be inefficient and slow, to protect the minority view?