Democrats should ask Clinton to step aside

John Kass
|
Posted: Nov 01, 2016 12:00 AM
Share   Tweet
The opinions expressed by columnists are their own and do not necessarily represent the views of Townhall.com. 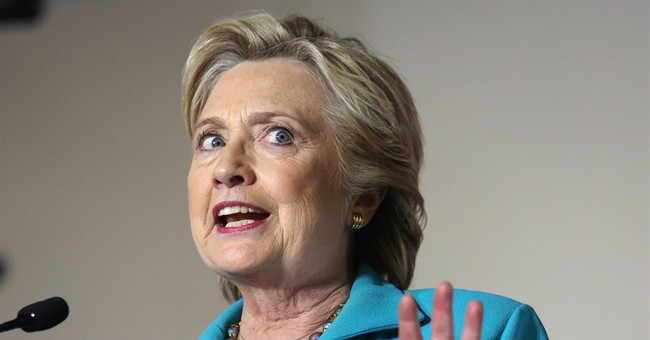 Has America become so numb by the decades of lies and cynicism oozing from Clinton Inc. that it could elect Hillary Clinton as president, even after Friday's FBI announcement that it had reopened an investigation of her emails while secretary of state?

It's obvious the American political system is breaking down. It's been crumbling for some time now, and the establishment elite know it and they're properly frightened. Donald Trump, the vulgarian at their gates, is a symptom, not a cause. Hillary Clinton and husband Bill are both cause and effect.

FBI director James Comey's announcement about the renewed Clinton email investigation is the bombshell in the presidential campaign. That he announced this so close to Election Day should tell every thinking person that what the FBI is looking at is extremely serious.

This can't be about pervert Anthony Weiner and his reported desire for a teenage girl. But it can be about the laptop of Weiner's wife, Clinton aide Huma Abedin, and emails between her and Hillary. It comes after the FBI investigation in which Comey concluded Clinton had lied and been "reckless" with national secrets, but said he could not recommend prosecution.

So what should the Democrats do now?

If ruling Democrats hold themselves to the high moral standards they impose on the people they govern, they would follow a simple process:

They would demand that Mrs. Clinton step down, immediately, and let her vice presidential nominee, Sen. Tim Kaine of Virginia, stand in her place.

Democrats should say, honestly, that with a new criminal investigation going on into events around her home-brew email server from the time she was secretary of state, having Clinton anywhere near the White House is just not a good idea.

Since Oct. 7, WikiLeaks has released 35,000 emails hacked from Clinton campaign boss John Podesta. Now WikiLeaks, no longer a neutral player but an active anti-Clinton agency, plans to release another 15,000 emails.

What if she is elected? Think of a nation suffering a bad economy and continuing chaos in the Middle East, and now also facing a criminal investigation of a president. Add to that congressional investigations and a public vision of Clinton as a Nixonian figure wandering the halls, wringing her hands.

The best thing would be for Democrats to ask her to step down now. It would be the most responsible thing to do, if the nation were more important to them than power. And the American news media -- fairly or not firmly identified in the public mind as Mrs. Clinton's political action committee -- should begin demanding it.

But what will Hillary do?

She'll stick and ride this out and turn her anger toward Comey. For Hillary and Bill Clinton, it has always been about power, about the Clinton Restoration and protecting fortunes already made by selling nothing but political influence.

She'll remind the nation that she's a woman and that Donald Trump said terrible things about women. If there is another notorious Trump video to be leaked, the Clintons should probably leak it now. Then her allies in media can talk about misogyny and sexual politics and the headlines can be all about Trump as the boor he is and Hillary as champion of female victims, which she has never been.

Remember that Bill Clinton leveraged the "Year of the Woman." Then he preyed on women in the White House and Hillary protected him. But the political left -- most particularly the women of the left -- defended him because he promised to protect abortion rights and their other agendas.

If you take a step back from tribal politics, you'll see that Mrs. Clinton has clearly disqualified herself from ever coming near classified information again. If she were a young person straight out of grad school hoping to land a government job, Hillary Clinton would be laughed out of Washington with her record. She'd never be hired.

As secretary of state she kept classified documents on the home-brew server in her basement, which is against the law. She lied about it to the American people. She couldn't remember details dozens of times when questioned by the FBI. Her aides destroyed evidence by BleachBit and hammers. Her husband, Bill, met secretly on an airport tarmac with Attorney General Loretta Lynch for about a half-hour, and all they said they talked about was golf and the grandkids.

And there was no prosecution of Hillary.

That isn't merely wrong and unethical. It is poisonous.

And during this presidential campaign, Americans were confronted with a two-tiered system of federal justice: one for standards for the Clintons and one for the peasants.

I've always figured that, as secretary of state, Clinton kept her home-brew email server -- from which foreign intelligence agencies could hack top secret information -- so she could shield the influence peddling that helped make the Clintons several fortunes.

The Clintons weren't skilled merchants. They weren't traders or manufacturers. The Clintons never produced anything tangible. They had no science, patents or devices to make them millions upon millions of dollars.

All they had to sell, really, was influence. And they used our federal government to leverage it.

If a presidential election is as much about the people as it is about the candidates, then we'll learn plenty about ourselves in the coming days, won't we?