Why Become A Cop?

John Kass
|
Posted: Jul 13, 2016 1:00 PM
Share   Tweet
The opinions expressed by columnists are their own and do not necessarily represent the views of Townhall.com. 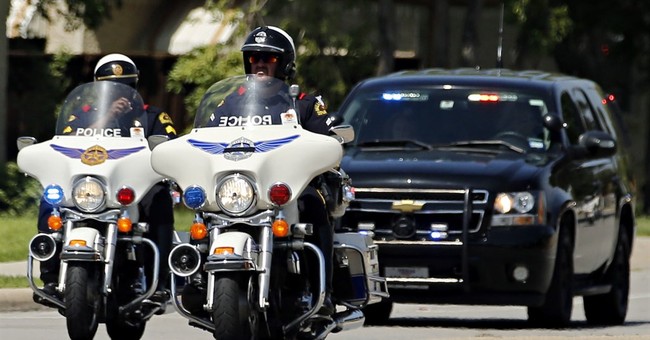 After the Dallas ambush, I thought of a rookie cop I met a few weeks ago.

A storm was coming, the wind was up, the sky was dark and he was wearing sunglasses. He looked young, excited, like an athlete before a game, perhaps only a few years older than my sons.

And now that five police officers have been assassinated and seven other officers shot by that Dallas sniper, I wonder: Why become a cop?

There's so much anger and hate out there, legitimate historical grievances and phony opportunistic shrieking and political betrayals and phony hashtag wars. And always there is the ugly, predictable politics of race, read from a script written long before most young officers were born.

I'd been standing with an older officer. We were telling each other stupid stories for laughs when the rookies walked up. They had on all their new gear and fresh Velcro, and one wore sunglasses. The older cop asked me if I had any advice to give them. And I just had to open my big mouth.

Lose the shades, I said.

Yes they're cool. But on a dark day with the sky gray and black, shades do little but hide your eyes. It means you don't want people to see what's going on behind them.

So lose the sunglasses and grow cop's eyes, I said.

I think of that now, with police officers dead in Dallas, and I'm ashamed. It was so easy to say, something a writer would say, a man of words who sits on his butt in an office, not someone out there on hot summer nights with bodies hitting the steaming pavement.

He'll grow cop eyes soon enough. They all do, as a perk of the job. And he'll grow them quickly, to look out into the world and see threats and liars standing between him and going home after his shift.

As I said, this was weeks ago, before that terrified cop in Minnesota killed the black man in his car, with the dead man's girlfriend live-streaming all that panic, and the governor attributing the shooting to racism. And before what happened in Louisiana, and later that Dallas sniper began shooting at the Black Lives Matter rally, killing in retaliation for the police shootings.

The chief said the sniper wanted to kill white cops.

It's been coming on for some time now, long before that horrible Black Lives Matter protest in New York, when a crowd shouted "What do we want? Dead cops. When do we want them? Now!"

What happened in Dallas has been coming long before Ferguson, Missouri, and long before black teenager Laquan McDonald was shot 16 times by a white cop in Chicago.

All that pressure made something such as this inevitable, so much anger and politics and cheap hashtag thinking. But there's also been the leveraging of legitimate grievances and rage. It could have happened in New York or Chicago. But it was Dallas.

When he said it, I thought of editors cringing, along with every mayor and police chief of every big city. Anyone with a brain can see how fragile things are now, how quickly something such as that could explode and get worse.

But it was what it was. The monster took a blood price from Dallas, from all police departments, and if Chief Brown hadn't made the killer's racist motivation clear, it would have leaked anyway, to crawl around in paranoid corners and grow. Better to get it out and deal with it and try some other way than just the stoking of anger.

Video and stories out of Dallas show Black Lives Matter protesters -- who were there to rally against police brutality -- were protected by police. And when shots were fired, cops rushed in to help the protesters, and immediately, #bluelivesmattered too, didn't they?

So why would that young kid with the shades ever want to be a cop?

He won't see people at their best. He'll see them often at their worst, and that alone may brutalize him. He won't trust politicians. But if he becomes isolated with only his blue tribe behind that blue line, he may become lost.

Some night, he might walk up a cold stairway in deep winter and see a plastic garbage bag on the open landing with something tiny and frozen inside, and he'll know what it was.

A political hashtag on Twitter won't help him deal with it, though #alllivesmatter, even newborns in bags, and he'll never tell his family.

So with all the angry racial politics and hate and stupidity out there, why ever think of becoming a cop?

Because they're needed, that's why. They know this. And they know what would happen if they weren't out there. And so do you.