Obama Puts His Thumb on the Scale for Hillary

John Kass
|
Posted: Apr 13, 2016 12:30 PM
Share   Tweet
The opinions expressed by columnists are their own and do not necessarily represent the views of Townhall.com. 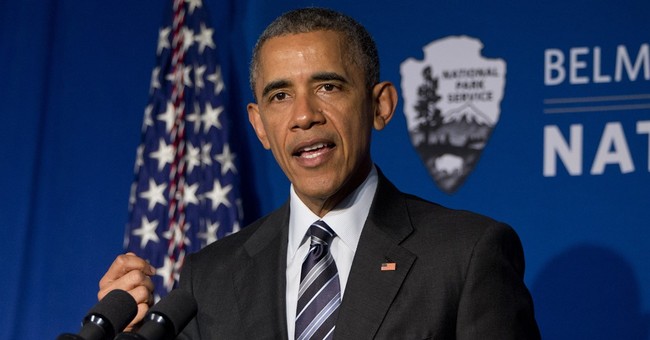 President Barack Obama once said he regrets not learning to play a musical instrument.

Yet with those long, thin fingers of his, you can imagine him as a cellist, maybe a pianist, or perhaps he'd be playing some mournful and mischievous notes on an oboe.

But the other day in an exclusive interview on Fox News -- with Hillary Clinton and Bernie Sanders spilling blood in the New York Democratic presidential primary -- the president decided to play another kind of fantasy instrument:

The presidential political scale, where futures are weighed.

And with Clinton's email scandal being investigated by the FBI and his own U.S. Justice Department, Obama pushed his thumb down upon that scale and pressed hard for Hillary.

He was asked by Chris Wallace if Mrs. Clinton's habit of putting thousands of classified messages on a private email server -- while she was his secretary of state -- may have compromised national security.

"I've got to be careful because, as you know, there have been investigations, there are hearings, Congress is looking at this," the president said, stressing that the ongoing FBI investigation into Mrs. Clinton's emails would not be influenced by politics.

"And I haven't been sorting through each and every aspect of this. Here's what I know: Hillary Clinton was an outstanding secretary of state. She would never intentionally put America in any kind of jeopardy."

And then later, asked again by Wallace, the president continued protecting Hillary Clinton.

"I continue to believe that she has not jeopardized America's national security," said the president. "Now what I've also said is that -- and she has acknowledged -- that there's a carelessness, in terms of managing emails, that she has owned, and she recognizes."

Never intentionally. No jeopardy. Recognized carelessness. So just forget about it. Nothing to see here, people.

Naturally, the assumption is that the Clintons have this thing wired, that she's got it all rigged the Chicago Way.

I could almost hear her laugh that Hillary Clinton laugh. Not the gentle grandmotherly Hillary laugh of hugs and warm muffins, or the wide-eyed fake "hah!" and flash of teeth that all politicians must use to ward off their true believers.

But that other laugh, Hillary's Queen Cersei laugh, the angry one of triumph and vindication, the laugh that tells you that revenge is coming up over the horizon and it calls your name.

All the president had to do was decline to comment. Officials do that all the time with pending investigations. But the president didn't decline. He talked. And he knows that every word a president says has profound weight.

So with Mr. Obama all but testifying for Clinton, saying what she did was unintentional, that it may have been careless but ultimately harmless, well, you don't need a be a mountain man to read those tracks in the snow.

Obviously the president feels pressure to defend his former secretary of state, who promises, if elected, that she'll fulfill his third term. If had he declined to comment, his silence may have been interpreted by some as throwing Hillary under the bus.

But if there is no FBI criminal information or no Justice Department action, the takeaway will be that the presidential thumb killed it.

Still, the president did guarantee that there would be no political interference from his end.

"I guarantee it," he said. "I guarantee that there is no political influence in any investigation conducted by the Justice Department or the FBI, not just in this case but in any case. Period."

And when he said "period," I couldn't help thinking I might just want to keep my doctor, period. That is, if I like my doctor, as someone once promised. Period.

"Nobody gets treated differently when it comes to the Justice Department because nobody is above the law," the president added.

Not even the Clintons?

They shouldn't be above the law. But get real. They were above it once, and if they're living at 1600 Pennsylvania Avenue next year in separate bedrooms, they'll be above it again.

Maybe they'll do us all a favor and just sit on the law, or use it as a footstool, as they look down upon America when the Clinton Restoration is complete.

And though the litany of their shame may be dimly remembered by many, it will all come rushing back when we're forced to parse their every word and we're told it all depends on what the definition of is, is.

Hillary Clinton sought to circumvent Congress and the American people by hiding her email on a private server in her basement. Having it there shielded her communications, including any conversations about her politics and the multimillion-dollar Clinton Foundation.

Her server could have been hacked by foreign intelligence.

And if the president hasn't talked to anyone involved in the investigation, how then is he so certain that national security wasn't compromised?

She didn't carelessly violate federal law. It wasn't coincidental. It was intentional. There are no coincidences in this kind of politics.

It's like a thumb on the thumb plate of an oboe, or a president's thumb on the scale. You don't press it by accident.