Ernie Banks, The Girl and The Man in a Wheelchair 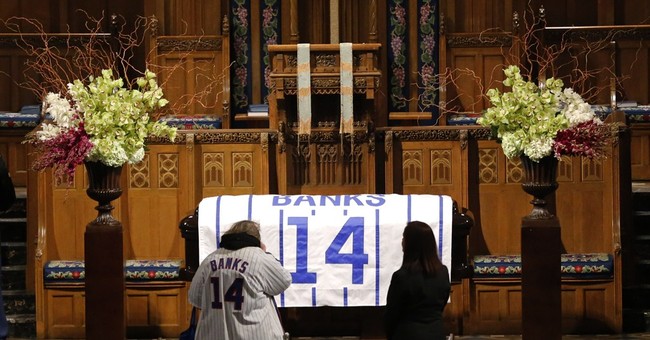 Everyone who grew up in Chicago seems to have their own Ernie Banks story, and with memorial services held last week for the Cubs Hall of Fame player, we're in a remembering mood.

"How about if the Cubs all wear 14 on Opening Day?" suggested reader Stephanie Weiland on Facebook.

That sounds like a great idea, for Banks, for the Cubs and for the city of Chicago.

And there was this note from Lloyd Tressel, of Naperville, Illinois, who years ago was on a flight from Arizona to Chicago. The jet was stuck on the tarmac.

"Ernie stands up and says 'Let's not just sit here, let's do some exercises.' So he led us in some basic gymnastics. Everybody was laughing and going along with him. He then decides to go into coach, and he does the same thing there."

Finally, they had to change planes and were waiting in the gate area, "And Ernie started the same exercise program in the concourse. He had hundreds of people involved, and everyone was laughing and smiling -- it was great!"

My favorite story is the one about Ernie Banks, the girl and the man in the wheelchair. Kathy Hounihan is a reader from Will County, Illinois. Years ago, she lived in Roseland, Illinois. Her father, Salvatore, who worked in a paint factory, was ill.

She'd read my Sunday column on Banks' passing and what he meant to Chicago, and decided to write me.

"It just struck a chord with me and I got right up out of my chair and went into my husband's office and I said 'I have to write to John Kass.'"
CARTOONS | Tom Stiglich
View Cartoon

What follows is her letter:

"Mr. Kass, I read your tribute to Ernie Banks in today's Tribune and just had to write this email.

I am now almost 69 years old and grew up in the South Side of the city you detailed in your excellent article. I was there, and I lived it. My Roseland home was a blessing to us and still is in my memory. I loved growing up as an Italian in the old neighborhood.

I was the third child, and a girl, in a family of four, raised by a father who worked at the Sherwin-Williams paint factory and a stay at home mother. We went to the local Catholic school, St. Anthony of Padua.

Now here is my story. When I was 13 years old, my father was stricken with ALS, Lou Gehrig's disease. At the time, he was undiagnosed. He eventually lived another 18 years. We were fortunate that he contracted the strain that allowed him to live that long with us.

He was always a Sox fan, but loved Ernie Banks. My mother and I were staunch Cubs fans. So our household was split, Cubs/Sox, and boy, how we fought for our teams!

When I was about 15 years old, a cousin of mine went to a gas station opening on the South Side where Ernie Banks appeared. He approached Mr. Banks for an autograph and told him about my father being a huge fan and that he was confined to a wheel chair with an undiagnosed ailment. (Dad wasn't diagnosed officially until the end of his life when we took him to Northwestern University.)

One Saturday afternoon I was in my room when the doorbell rang. I heard excited talking in our dining room so I went to find out who the visitor was. There stood Ernie Banks and his wife in the middle of our dining room shaking hands with MY FATHER! They were all dressed up and on their way to a restaurant not far from where we lived. Mr. Banks explained that when he heard about my dad's situation from my cousin he just had to stop by to say hello. My mother, who was always gracious, asked Ernie and his wife to have a seat at the table and offered refreshments. Mr. Banks said he'd have a beer! Don't remember if his wife had anything since I couldn't take my eyes off my hero.

At first Ernie was rather timid in his conversation with my dad, but as my dad began rattling off statistics, specific games Ernie scored in, what teams the Cubs beat and when, Ernie was hooked. They spoke about an hour until Ernie rose and said it was time for them to go. Both he and his wife shook hands all around and thanked my folks for their hospitality. He also presented my dad with an autographed picture of himself which my parents kept on the mantelpiece of our fake fireplace until the day dad died!

I couldn't wait to go to school on Monday to tell all my friends. I never wanted to wash my right hand again! My friends were green with envy. My brother, who was 3 years younger than I am, also told his friends, but they wouldn't believe him until they came to the house and actually saw the signed photograph.

Great day! Great Man! May he rest in peace."

It's what we do in private that counts.

And Ernie Banks didn't have to show up in Roseland. His time was precious, and back then, all of Chicago wanted a piece of it. But he took time and spent it with a man he didn't know.

There was no crowd watching. There were no reporters or publicity people, no advertisers, no big shots. Hardly anyone was there to notice.

Just a man in a wheelchair. And the daughter who never forgot a kindness shown to her dad.