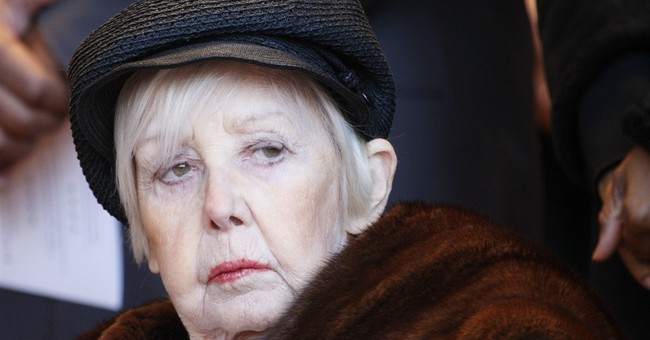 Did she ever get steamed up at a negative portrayal in the media -- and there were many -- then have a few drinks and call the reporters to give them angry editorial criticism?

Sure she did. Often.

And the time she became furious with her husband, Jay McMullen, and whipped an ashtray at his head because he deserved it? And he certainly did deserve it.

Yeah, I heard that story.

Or that time she demanded that the Chicago Outfit help her reduce violence among black street gangs, and called out for Tony Spilotro and he kept ducking her?

So she called all the Las Vegas hotels looking for him, and when that didn't work, she put out the word that she was ready to turn their Rush Street playground into a church. Spilotro called.

"Is she (bleeping) wacky?" Spilotro said to an associate after talking to her. "She's wacky but she's tough."

Yeah, I heard that story too.

She sure was tough. She was Fighting Jane.

She fought the political machine and won. And although her name had been all but scrubbed from official Chicago for decades by a bully with not one-tenth of her courage -- the Romans called the practice Damnatio memoriae -- enough of us remember what she was about.

She loved this city as if it were her own child. She gave the cops their first union contract. And we knew her by this name.

When Byrne died Friday after a long illness, official Chicago immediately put out the black bunting. She received the official treatment.

As often happens when a once-powerful figure passes, some went too far, and I heard unctuous voices portraying her as if she were a plaster feminist saint, or a kindly grandmother in lace in one of those cameo jewelry pieces that old ladies once wore in movies.

But she wasn't that. She was more than that.

She was complicated and cunning, and she had guts. She made deals with the tough guys, because other tough guys were coming at her.

She also brought the people back downtown after the people had abandoned it.

Byrne opened the city to Hollywood movie crews -- you haven't forgotten "The Blues Brothers" -- after years in which feature filmmaking had been banned by the old dead king she once served.

She began neighborhood and downtown festivals, including Taste of Chicago.

"The formula was basic: The more attractions, the more people, the more life for the city. I vowed to bring back the crowds, to make Chicago so lively that the people would return to the heart of the city and its abandoned parks."

But before revisionists get too far afield, let me tell you how it was.

When she became mayor, the various factions thought they owned her. The pro-Daley aldermen had it all figured out and explained things to her, all about who would run her City Council, and who would chair the committees.

They had drawn maps and charts and plans. They would help Jane govern. They must have thought her a fool.

The delegation included then-Alderman Jeremiah Joyce (half of future Mayor Richard M. Daley's political brain) and Aldermen William Lipinski, Richard Mell and Martin Oberman. They left their maps and charts and said they would return.

But when they returned, the cops wouldn't let them in.

Inside was Alderman Edward Vrdolyak, backing the other young political Turks, men like Ed Burke, and from Springfield, Mike Madigan. They had Byrne's ear. And the Daley faction hated her. The great Chicago political war had begun.

In America's three biggest cities, there has been only one female mayor -- Byrne. But the novelty didn't help her. She was treated rather shabbily by the media.

When she'd fire cabinet officers, it was described as Byrne's Revolving Door Administration. Years later, when Daley fired people, it was attributed to his passion for getting things done.

She wasn't an angel. But she understood Daley was a threat, and she tried to take him out in the 1980 Democratic Party primary for Cook County state's attorney.

The entire Cook County Democratic Party was against him. But columnist Mike Royko was for him. Those who don't know that Royko saved Daley's political behind don't know Chicago.

The rest, of course, is history. It began to break against her when she removed some African-Americans from the boards of the Chicago Housing Authority and Chicago Public Schools.

Byrne resented reporters chasing her down for comment. One was Fran Spielman of the Sun-Times, who had just returned to Chicago after a vacation.

"We're chasing Byrne and I ask her about the school board issue, and she just won't talk," Spielman told me Friday. "But then she turns to me and says, 'I don't know about that, but you have a nice bleach job.' I was mortified."

But that was Jane Byrne.

Of course she was tougher than Rich Daley. When he became mayor, the Damnatio memoriae -- the removing of Byrne from official memory -- began.

He pointedly refused to invite her to his inaugurations. Her ideas -- including the Museum Campus on the lake -- were appropriated without acknowledgment. A fountain honoring her was dismantled but later quietly restored.

She was persona non grata, alone, with so many in town frightened of Daley in those years. What he did to her was cheap and uncalled for. But it was the Chicago Way.

She was Mayor Jane Byrne.