Chicago Democrats a Protected Species on the National Stage 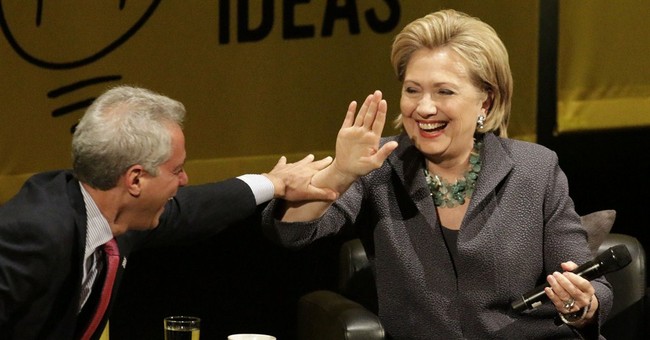 Prominent Chicago Democrats have had an easy time with the national media for decades -- as easy as shaking a ring of keys to distract an anxious child in church.

Former Mayor Richard M. Daley rode a bicycle in photo ops and put a few plants on the roof of City Hall, leading the national news networks to cast him as the "green" mayor, not as the absolute boss of a broken and corrupt political system that piled debt on the city and drained its future for the benefit of the insiders.

President Barack Obama appeared on the late-night talk shows as the mystical healer of America's broken politics, not as some untested suit who held the hand of now-imprisoned bagman Tony Rezko while learning to cross Chicago's political streets.

He hangs with Jimmy Fallon and they tell jokes about jumping into a freezing Lake Michigan. Emanuel is as cool and practiced a media manipulator as the fictional Frank Underwood in "House of Cards."

But a headline of 82 people shot in Chicago in 84 hours is embarrassing to the mayor, particularly for a mayor who sees the fifth floor of City Hall as a mere stop on the road to his national political destiny.

So he held a news conference on the Far South Side this week, a familiar exercise, full of the necessary archetypes:

Wise neighborhood matrons flanking the mayor and nodding their heads in agreement. Grieving families in support, better there at his side than out on the street asking angry questions.

They talked of the need for everyone to step up to face the crisis, from community leaders to parents, federal officials, judges -- everyone except, of course, the mayor of Chicago.

And he avoided the overriding question, again and again: When are we going to hire more police officers?

"Where are the parents? Where is the community? Where are the gun laws? Where are the national leaders, so we don't have the guns of Cook County, Indiana and downstate Illinois flowing into the city?"

A TV reporter asked him about tired police officers who've been working overtime because he won't hire more. Another reporter asked why New York and Los Angeles have lower homicide rates than Chicago.

thank you (for) your question," Rahm said, launching into a diatribe on gun laws, rather than on police staffing.

He's good at shaking keys. And some analysts bought his talking points, agreeing with City Hall that talking of police manpower was just too easy.

Too easy? What else is left? A miracle?

According to city data, overall Police Department staffing was about 12,250 at the start of this year, down almost 900 officers from the end of 2009. The Rahmfather has been hiring police, but not at a fast enough rate to keep up with attrition.

Just about every police officer I've talked to feels overworked and tired. They're worn thin. Morale is down. That's what month after month of overtime can do.

On Wednesday, Pat Camden, spokesman for the Fraternal Order of Police in Chicago, wasn't receptive to the mayor's policies during an interview with me and Lauren Cohn on WLS-AM 890.

"It would have been nice to hear the mayor saying, 'Where were the police? The police are out there doing their job, and if I had more police maybe we wouldn't have had so many shootings.' But that's not the way he operates," Camden said.

There's always money to be found when the politicians want to find it.

Some $50 million has been set aside for yet another monument to a Daley, a park named for the former mayor's late wife. And there's about $600 million or so for a lakefront project that includes a new athletic venue for DePaul University, although the Bulls and Blackhawks offered the use of the United Center rent-free.

And just before his last election, Gov. Pat Quinn found $54.5 million in state cash for a violence-reduction program now being investigated by the feds as a possible political slush fund.

There are not enough good-paying jobs on the predominantly African-American South and West sides. But there seems to be plenty of political cash to toss around.

Meanwhile, Democrats are encouraging waves of unskilled labor from south of the border to compete for what few low-skilled jobs still exist.

Families already savaged by decades of dependency on government programs continue to dissolve. Violence reigns. The giant street gangs have broken up into small and viperous neighborhood cliques.

Many children aren't allowed outside. I remember a detective telling me that for such children, it's like the "Hunger Games" out there.

When seen in the national news, they're about as green as forest ferns. Or they're all about soothing old political scars and healing divisions.

Or they're hip and they know Hollywood and can jump into icy lakes with late-night TV personalities.

All they have to do is rattle the keys, misdirect, smile and turn on the charm.