World Cup Hero a Chicagoan by Blood, by Tattoo 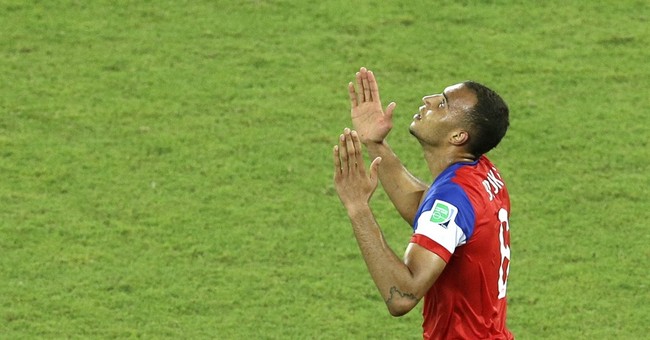 Chicago must truly be the most American of cities, and it's not because politicians keep saying it. John Brooks, the newest American soccer star in the World Cup, has testified to this fact.

Brooks didn't testify by scoring that incredible goal to win the critical first game against the Black Stars of Ghana, a goal that has caused him, unfortunately, to be dubbed with the pressure-cooker nickname #johnnyfutbol.

Instead, the testimony comes from the tattoos on Brooks' elbows.

A tattoo on his left arm is a map of Berlin, where the young and inexperienced defender was raised, the son of an American soldier stationed in Germany.

But the tattoo on the right arm is of Illinois, with a blue star for Chicago, the home city of his father's clan.

And by those ties, who could argue against us claiming Brooks as our own?

"Cheegago" is the way I heard Brooks say the city's name a few weeks ago in otherwise impeccable English on an ESPN documentary leading up to the World Cup.

Soccer is the world's game, and the World Cup is more important to the world than the modern Olympics.

In the Olympics, the great superpowers like America can roll up big numbers in the medal count against nations that can't possibly compete.

The others have the desire, but they don't have our kind of money. Many of their people have to survive before they train. And they definitely don't have what the superpowers have: technocratic sports machines adept at separating body types into specialized athletes.

When the U.S. crushes South Americans and poorer Europeans in track and field, is it because we have better natural athletes or because we have the greater sports machine? Vanquishing the Balkans in sports in which we're comfortable doesn't exactly win us great glory. If NBA stars roll through the world in basketball (which used to happen quite frequently), does it really mean anything? No.

But the World Cup is different. Soccer is a sport for the poor, a sport requiring only a ball. In this, it's much the same as basketball here. The world is decades ahead of us, and so to take on the world in the World Cup is a stupendous challenge.

Even Jurgen Klinsmann, the former German star now coaching the American team in Brazil, has said that to think the U.S. could actually win this thing is a stretch. The conscious mind has to agree.

But here's the thing Klinsmann might not understand. America isn't only a place. It isn't only a ledger of power that still projects across the world. America is a dream. We're dreamers. We dream things, and then we accomplish them.

The U.S. is the underdog in this sport of the feet and the ball, and some countries show pity. Their analysts talk about our heart and desire, our grit, but not American technical ability or finesse.

This is grating to the American ear, yes, because we're so used to being on top and because being patronized is insulting, especially when the insulters are correct.

But it's also good for us because it burns the heart. And that's what I saw, and perhaps you saw it too, in this week's game against Ghana, 11 burning hearts on the field in Brazil.

The U.S. team, cut down by injury, had to make up for poor technical play by running and competing and willing themselves to keep fighting. And Brooks, whom some argued shouldn't have made the team, won it at the end.

Has this one game changed American attitudes toward soccer? No. It's a process. Soccer's popularity in America is as inevitable as the hairs growing out of the ears of sports geezers who feel threatened by the beautiful game.

But advertisers and news executives lusting after that 18-to-49 demographic certainly didn't miss all the kids in all the parks at the public viewings. And they'll see a similar crowd again Sunday, when the U.S. team plays Portugal.

Brooks, an American citizen, hasn't spent much time in Chicago, but we can still claim him. Brooks' father was from here, so the kid has ties. That's the way things work, and Chicagoans know it. So let's claim him. Brooks is ours now.

Those thousands of young fans crowding the LollapaloozaLand of Grant Park the other evening certainly claimed him, even if they didn't know a thing about the tattoos.

They screamed as Brooks skied into the air to put his head on the ball in the closing minutes against the Black Stars. And in public parks in big cities and small towns across America, the same scene: crowds of young people loving their beautiful game.

Brooks jumped up to meet that ball with his head. He drove it down into the ground, and the goalie couldn't reach it as it went into the net.

That speaks not only of relentless training and discipline and muscle memory, but something else. He dreamed it.

He's a Chicagoan, by his blood and by that star on his elbow marking the city by the lake.

And he dreamed it. He's an American.