Fake Royal Show Among Bottom Of The Heap 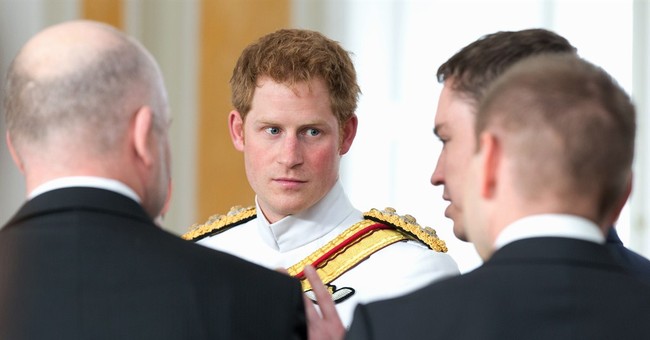 With the Russians on the prowl, the Chinese hacking into our computers, Boko Haram in Nigeria triggering fear and celebrity hashtags, the last thing America needs is to lose a trusted ally:

But the great Anglo-American alliance is threatened by the reality TV show "I Wanna Marry 'Harry,'" which premiered Tuesday on Fox and which mocks foolish young American women who think they can shake their hips and marry an English royal.

This stupid show does more damage to NATO than Jack Bauer shooting English protesters in the legs outside the American Embassy in London the other night (also on Fox).

I promise you that Jack Bauer knew what he was doing.

He shot the anti-American protesters in the back of the knees so the bullets came out the shins. But he didn't take any pleasure in hurting those crazed Labour Party protesters shrieking anti-American epithets.

What's more, he shot them gently, and then only to create a diversion so he could sneak into the embassy, knock out about 20 Marines (without killing anyone) and save the president.

"I Wanna Marry 'Harry'" undoes all of Jack Bauer's hard work. It's delicious, if you're a hard-bitten English leftist mocking foolish female celebrity vixens and our pathetic American hunger for all things royal.

So if it's not the most stupid show in the history of stupid shows, it's got to be among the top 10, ranking up there with "The Flying Nun," "Homeboys in Outer Space" or "My Mother the Car."

Here's how this one works: A dozen young women in short skirts, some of whom have competed in beauty pageants, all with good hair, are flown to an English country estate with sweeping grounds and servants.

And they are given a fantasy worthy of a princess. They're told they have a chance to win the love of one of the world's most eligible bachelors.

As the young ladies have tea -- this is England, after all -- a helicopter lands on the wide lawn below and out climbs a carrot-topped young man. He looks exactly like, well, a peer of the realm, and the American girls begin squealing with delight.

"Oh, my God," says one American girl, either the one studying molecular biology or the one who participates in beauty pageants.

"That's Prince Harry, and I know it," says another, her hands to her face. "I know it."

Many OMGs and broad facial expressions later, the fun really starts. They drink cosmos and champagne, and the impostor who is not really Prince Harry takes them on "romantic getaway" dates.

He plays polo and shoots clay pigeons and whatever else royals are supposed to do, if all you know about them is what you saw on "King Ralph."

The women, young enough to have been raised on reality TV, play their parts with fluttering eyelids and gyrating hips. The tongue of one contestant runs fetchingly along the edge of her perfect teeth. It's a wild thrill for those allowed to stay on for succeeding shows.

And there's some soul-crushing weeping from ... I think it was Meghan, who cried that she won't get a chance to marry Harry after all. Poor Meghan.

Do they really think it's Harry?

Or do they merely want face time on a TV show and are willing to wallow in geekdom in order to become what they think are celebrities?

If they really think it is Harry, there's nothing to be done, except to give them a sedative and a quart of chocolate ice cream for the long flight home. Let's hope the in-flight movie is "The Queen" with Helen Mirren.

If they don't think it's Harry, then there is some hope for them after all. And years later, if they have children, the kids can find it all on YouTube and see their mother trying to be a great lady, what with the gyrating hips and so on.

Please don't misunderstand. England is a great nation, greater than we realize.

Without England and English common law, there would not be the America that we know. They civilized the world and spread the classics. They've introduced rare roast beef and horseradish with whipped cream to the finer menus, and their style of soccer is the most thrilling on Earth.

But most important, we've had their backs and they've had ours when the light of the world almost went out.

I may ridicule "I Wanna Marry 'Harry,'" but that doesn't mean I won't watch it. There's something about the premise that smacks of therapy. And isn't therapy the real reason for reality TV?

You watch clueless idiots unaware that the audience and the host share some joke between them, and what's really being offered is an illusion of power. Yes, it's cheap.

But it still doesn't explain our fixation with English royalty. And by this I don't mean real English royalty -- Elizabeth I, for example, or Victoria, incredibly tough women who ruled the world with their navies.

I mean royal-as-fantasy, a world of plumes and trotting horses and glass slippers, magic and Prince Charming.

When Diana died years ago, American news networks sent their anchors to London, and they dressed up in costume.

There were ridiculous big black hats for the women anchors and ridiculous morning coats for the male anchors. They weren't covering the death of a princess as much as they seemed to be auditioning for "My Fair Lady." It was embarrassing.

But the TV news people had no shame, like those American girls yearning for a fake prince.

What "I Wanna Marry 'Harry'" needs is a dose of Jack Bauer.