John Hawkins
|
Posted: Jan 06, 2018 12:01 AM
Share   Tweet
The opinions expressed by columnists are their own and do not necessarily represent the views of Townhall.com. 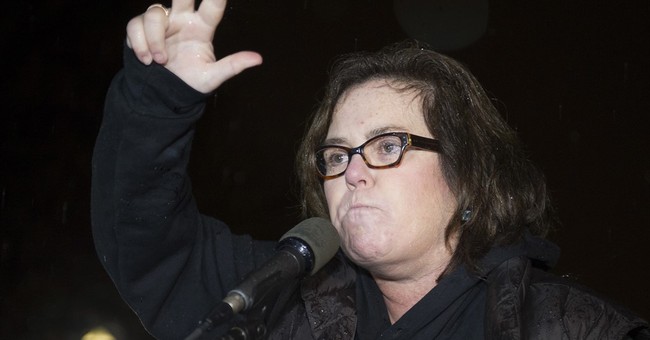 20) Kathy Griffin: I'm sure Kathy Griffin was shocked that even nervous liberals turned on her after she took an ISIS style picture holding a realistic mock-up of Trump's severed head. Her "I'm a victim" complaints about Trump afterwards didn't go over too well either. Good luck to her finding work as well...hopefully not as a hairdresser because the bald look she rocks these days is not at all flattering.

19) The P*ssyhat: What sort of creepos wear headgear named after their genitals? Sure, the tinfoil hat had a great run at the top of the list of most embarrassing things you can wear on your head, but the p*ssyhat has climbed atop it.

18) Chelsea Handler: On the one hand, I want to give Chelsea Handler credit for dropping her unfunny Netflix show so she can do equally unfunny political activism. If you’re going to be unfunny, putting a p*ssyhat on your head and associating with feminists seems like the perfect way to do it. On the other hand, she really doesn’t seem like a very nice human being.

Defining Quote #1: "To all the generals surrounding our idiot-in-chief...the longer U wait to remove him, the longer UR name will appear negatively in history." -- Chelsea Handler

Defining Quote #2: “That harlot that they’re dressing up and trolloping out every day? I mean, one day she has no makeup on at all, the next she got, like, six-foot-long eyelashes, and she’s got cleavage and summer whore lipstick all over her face. Can you believe what they turned her into? A proper trollop.” -- Chelsea Handler on Sarah Huckabee Sanders

Defining Quote #3: "I really don't think that someone who looks like they crawled out of the bottom of a bottle...needs to be commenting on the White House Press Secretary's Appearance." -- Dana Loesch

17) Elizabeth Warren: The world’s most famous fake Indian spent her year tossing off socialist boilerplate, positioning herself for 2020 and pretending to be very offended when Trump called her Pocahontas, thus guaranteeing that she will be called that “racist” term 14 kajillion times over the next 4 years.

16) Michael Moore: Moore is truly a left-wing craziness pioneer; so it feels almost wrong to put him this far down the list. Unfortunately for him, the competition in the “I hate white people, conservatives and guns” crazy Olympics has grown astronomically in the last few years and now he tends to just place, instead of medal.

Defining Quote #1: "The angry white guy is dying out, and the Census Bureau has already told us that by 2050, white people are going to be the minority, and I’m not sad to say I can’t wait for that day to happen. I hope I live long enough to see it because it will be a better country." -- Michael Moore

15) Shaun King: Setting aside the fact that he's probably a white dude pretending to be a black dude, which has been discussed to death, he brings absolutely nothing to the table except a talent for finding new things to purportedly be outraged about because they're supposedly racist.

14) Zinnia Jones: “She” is on the cutting edge of liberal thought on transsexuals. We’ve gone from pretending that guys who have surgery and take female hormones are women to, in Jones’ case, demanding that straight guys date other dudes.

Defining quote: "Being exclusionary of trans women partners should be an outlier and marginal position for straight men, not some commonplace expectation. These angry declarations that they have some absolute right to not want to be with trans women are just misplaced and inappropriate." -- Zinnia Jones

13) Sheila Jackson Lee / Maxine Waters: Both of them are embarrassingly dumb for members of Congress, yammer on about impeaching Trump and blame racism for every problem in their lives. They're basically indistinguishable idiots; so why not let them share a slot on the list?

12) Rosie O’Donnell: Is it fair to put a woman on this list whose entire year seemed to be one long mental breakdown over the fact that her hated arch-enemy actually became President? Rosie was a little loopy and a horrible person before Trump became President; so I’m going to say “yes.”

Defining Quote #1: “so how about this
i promise to give
2 million dollars to senator susan collins
and 2 million to senator jeff flake

Defining Quote #2: "I seriously worry whether I will be able to live through his presidency." – Rosie O’Donnell

11) Bill Nye “the Science Guy”: Ironically Bill Nye, who is actually a children’s entertainer pretending to be a scientist, has been embraced by liberals as the latest sanctimonious “voice of science” lecturing us all on the politically manufactured dangers of global warming.  It’s like having a TV doctor trying to do heart surgery.

10) Stephen Smith: He's so smug that he makes Keith Olbermann seem humble, which wouldn't matter if he just talked about sports. Unfortunately, he seems to mainly make news for commenting on politics these days. They might as well have Rachel Maddow at ESPN as this ass.

9) John Conyers: Apparently the longest serving member of Congress had a habit of bad touching female staffers when he wasn’t dropping his pants in front of them. Worse yet, taxpayer money was used as hush money to cover it up.  Also, he’s pretty clearly senile. Just saying.

8) Berkeley: Berkeley or as it’s better known, Fascist U, loves to say it “gave birth to the free speech movement.” Now the attitude seems to be that it brought free speech into the world and so it should be allowed to take it out of the world.

7) Evan McMullin/Jennifer Rubin/Matthew Dowd: Rubin has always been a squish and it's hard to say how serious McMullin or Dowd ever were about their conservatism, but in the post-Trump world, all three of them are now largely indistinguishable from Nancy Pelosi, except they sound more bitter.

6)  Sally Kohn: It’s not that Sally Kohn is dumb per se; it’s more like she took a women’s studies class with a wacky professor, was kicked in the head by a horse, and everything she thinks, says and blurts out of her liehole is shaped by that brief childlike moment in time.

Defining Quote: "Whether we realize it or not, most men hate women." -- Sally Kohn

5) Jimmy Kimmel: Made news more than once for gratuitously exploiting his sick kid as an excuse to sanctimoniously peddle misinformation about health care. Whatever happened to just being funny and entertaining people?

4) Harvey Weinstein: As a man, I'd like to give a special thank you to Harvey Weinstein for setting off the #metoo movement. Because he wanted to have young actresses watch him shower and do awful things to potted plants, every other man in the country has to be worried that we will have our lives ruined after being falsely accused of grabbing some woman's butt thirty years ago. Great job, buddy!

3) Antifa: A bunch of fascists use Mussolini tactics to try to shut down the speech of anyone they disagree with because of…”we’re gotta fight fascism” or something. They're always happy to bravely use violence to achieve their ends as long as they're armed, their victims aren't, and they outnumber them at least 5-to-1.

2) Hillary Clinton: She got to spend this year in Costco promoting her book that absolved her of any wrongdoing during the election while Donald Trump got to enjoy being the President. Seems like a fair trade.

Special Defining Quote #1: "To say you won't respect the results of the election, that is a direct threat to our democracy." – Hillary Clinton in October of 2016

Defining Quote #2: “There are lots of questions about (the election’s) legitimacy.” – Hillary Clinton this year, after losing the election

1) The NFL: The same league that will fine players for wearing Santa Claus-themed cleats at Christmas time allowed its players to disrespect the flag of the country that allowed the spoiled man-children that play for it to become rich, pampered elites. Soccer should be wildly grateful that the NFL has replaced it as America's most un-American sport.

Defining Quote #1: "Wouldn't you love to see one of these NFL owners, when somebody disrespects our flag, to say, 'Get that son of a b*tch off the field right now, out, he's fired. He's fired.'" – Donald Trump