There Are No Oppressed People in America

John Hawkins
|
Posted: Oct 01, 2017 12:01 AM
Share   Tweet
The opinions expressed by columnists are their own and do not necessarily represent the views of Townhall.com. 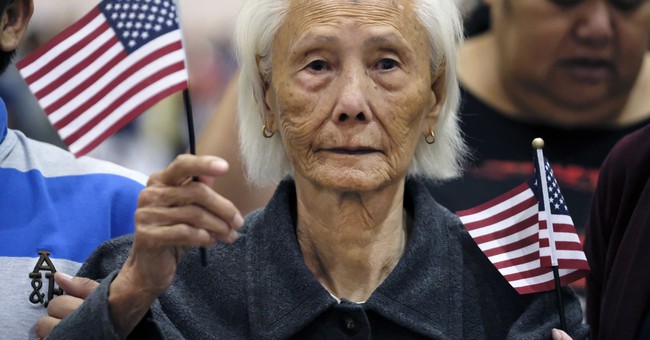 There are American women in my Twitter feed who think they are more oppressed than women in Saudi Arabia. I. Can't. Even." -- John Podhoretz

Never before have so many claimed to be so oppressed and mistreated over so little as Americans in 2017.

We have men who have gotten extraordinarily wealthy and famous playing a game who protest the flag of the nation that put them not just in America’s wealthiest 1%, not just in the global 1%, but in the historical 1% of everyone who has ever lived.

We have pampered college students at expensive private schools having hissy fits because someone they disagree with is allowed to speak at an event on campus they’re not even required to attend.

We’re told Hispanic Americans are oppressed because foreign Latinos who came to this country illegally when they knew the penalty was deportation are not universally being allowed to get away with their crime.

We have feminists who think they’re oppressed because some guy “mansplained” something to them by finally giving his opinion after listening to them blather on for 10 minutes.

We have black Americans who live in bad neighborhoods, think the cops target them because of their race, can't find a job and are mired in poverty who keep voting for exactly the same government officials to be in charge of their neighborhood. If they’re "oppressed," they’re active participants in their own oppression.

The only Americans that are actually discriminated against by the government these days are white Americans who are victimized by Affirmative Action. Is that un-American and wrong? Absolutely, but even the relatively small number of people victimized by that policy are getting other jobs and going to other colleges if they’re hustling.  So, they’re not oppressed. This country has problems, issues and things to work on, but this is as good as it gets in the real world right now. That’s why few people leave this country and millions try to get in every year.

Do you realize the stunning level of self-absorption and self-deception that it takes to believe you’re oppressed in America? Real oppression is women in Saudi Arabia getting to drive for the first time in 2017. Oppression is worrying that you may be jailed in China for speaking out against the government. Oppression is eating your dog in North Korea because the dictator running the country with an iron fist is just fine with you starving to death. Oppression is Christians across the Middle East being systematically murdered because of their religion while their Muslim rulers shrug their shoulders.

It’s also very interesting to take a look at the “leaders” who say you’re oppressed. For the most part, they are the least oppressed people on earth. Typically, they’re politicians, actors, actresses, rock stars or media personalities with lots of money and influence. The more they tell people that the problems in their life aren’t their fault, the more attention, retweets and money they get. Funny how that works.

You think black Americans are oppressed? Compared to what? America a hundred years ago? How about women? How about the poor? Many poor Americans have access to technological and medical advances the richest Americans a hundred years ago would have paid vast fortunes to acquire had it been possible. There are no “Irish Need Not Apply” signs anymore. Asians aren’t being worked to death on the railroads. Little kids aren’t being forced to drop out of school and head to the coal mines. Seventy one percent of the world’s population lives on less than $10 a day and you want to tell me how bad anyone in America has it? Please. Even the homeless panhandlers make more than that here.

There are no oppressed Americans, but there are an awful lot of Americans who are spoiled, bored, need attention or are just looking for any excuse for messing up their own lives. FORTUNATELY, you don’t have the opportunity to be Rosa Parks, MLK or Susan B. Anthony in America because all those people have already done the heavy lifting for you. If you’re an American who wants to fight oppression, you may as well join the military and wait for the next fight against a dictator or terrorist organization overseas because there are no oppressed Americans. However, there are an awful lot of sad, weak people who claim the tiny molehills in front of them are mountains so they can feel better about themselves.