John Hawkins
|
Posted: May 13, 2017 12:01 AM
Share   Tweet
The opinions expressed by columnists are their own and do not necessarily represent the views of Townhall.com. 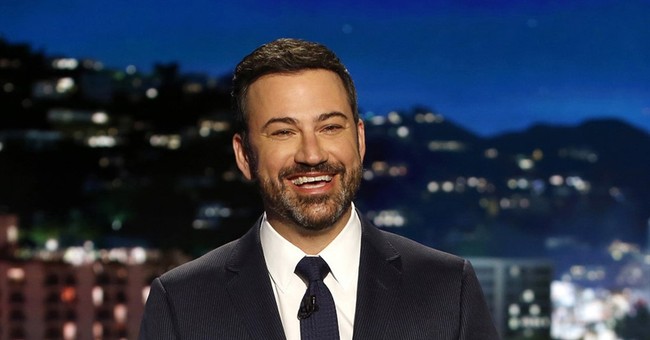 “Civilization has been aptly called a ‘thin crust over a volcano.’ (Liberals) are constantly picking at that crust.” -- Thomas Sowell

After Hollywood jackass Jimmy Kimmel was criticized for exploiting his son’s illness to push his political agenda and incorrectly insinuating that surgeries for newborns weren’t covered before Obamacare, he did a follow-up on the subject where he said, “I would like to apologize for saying that children in America should have health care. It was insensitive, it was offensive, and I hope you can find it in your heart to forgive me.”

This is a great example of what may be the most annoying, dishonest thing that liberals habitually do.

Jimmy Kimmel favors a certain political policy. It’s one that has been a disaster for tens of millions of Americans, including a lot of children.

Jimmy Kimmel could have said, “Obamacare may not be perfect and it may have been sold with a lot of lies, but I believe it’s worth it for everyone else to pay more so the small percentage of the population with pre-existing conditions and no insurance can be covered.” That pitch may not be a political winner, but at least it would be an honest argument.

Instead, Kimmel is essentially arguing that ONLY people who agree with him care about the healthcare of children and the rest of us want children to die.

This sort of rhetoric has become commonplace on the Left and it’s not just dishonest, it’s evil. It’s bad for the country. It could even potentially split the country apart one day because we won’t be able to continue to live with each other. In fact, we’ve already reached the point where California’s threats to secede are being met with cries of “faster please, what can we do to help?” from millions of conservatives.

If you believe someone doesn’t want kids to have healthcare, hates gays, hates women, hates minorities and wants more rapes to happen, you will probably detest that person. However, liberals seldom consider that the reverse of this is also true. You will also probably detest people who falsely accuse you of not wanting kids to have healthcare, hating gays, hating women, hating minorities and wanting more rapes to happen. In the Palestinian territories or Syria, there might be significant numbers of people who believe many of those aforementioned beliefs. In America, there are very few. What this means is that there are large numbers of people liberals have inspired hatred towards via falsehoods and also large numbers of people who’ve grown to abhor liberals after being targeted by their lies.

Put another way, liberals are CREATING an America where it’s natural to HATE people of differing political views. Not disagree with, HATE.

My initial reaction to hearing Jimmy Kimmel’s, I would like to apologize for saying that children in America should have health care,” comment was thinking that I’d enjoy punching him in his smug face.I have no doubt that vast numbers of people that liberals dishonestly call racists, misogynists and homophobes feel exactly the same way. Of course, it’s one thing to feel that way and it’s another to actually do it or suggest others do it as many liberals do. We have left-wingers rioting in the streets to stop people they disagree with from speaking at colleges and publicly encouraging each other to physically attack Nazis, while accusing pretty much everyone who doesn’t toe the liberal line of being a Nazi.

We’ve gotten to the point where someone as inoffensive as Betsy DeVos can’t even give a commencement speech at Bethune-Cookman University without gaggles of idiots screaming and booing. If those liberals can’t even show a modicum of courtesy for Betsy DeVos at a commencement speech, how do they work with people they disagree with? How do they go to church with them? How do they date? How do they share the same space? If the answer is, “They can’t do any of those things,” then how do we ultimately share the same country?

I have a left-wing acquaintance who is still endlessly complaining about Hillary Clinton getting coverage from the very liberal mainstream media that was too negative for his taste. When I noted that Hillary may have gotten some harsh coverage at times, but Trump’s coverage was much worse, I was told in so many words that, “Yes, but Trump deserved it.” Similarly, have you noticed that liberals don’t seem to accept and respect the fact that conservatives found Obama just as loathsome as they find Trump?

It’s the liberal mentality that says, “People who disagree with us on anything are racist, sexist, homophobic and evil. Therefore, we don’t have to treat them fairly. Therefore, their concerns are irrelevant. Therefore, it’s acceptable to lie about them, take away their rights or even use the IRS or legal system to mistreat them. Therefore, they don’t matter. At all.”

I loathe liberalism, but I don’t hate liberals. I would not be okay with lying about them, preventing them from speaking at universities or attacking them because of their political views. I think a lot of liberals are deeply misguided and put their emotions above logic and the good of the country, but I don’t think most of them are evil. Unfortunately, many liberals don’t afford conservatives that same courtesy and one day, that may split the country because what brings us together as a nation is becoming smaller than the liberal hatred that is dividing us.