John Hawkins
|
Posted: Apr 29, 2017 12:01 AM
Share   Tweet
The opinions expressed by columnists are their own and do not necessarily represent the views of Townhall.com. 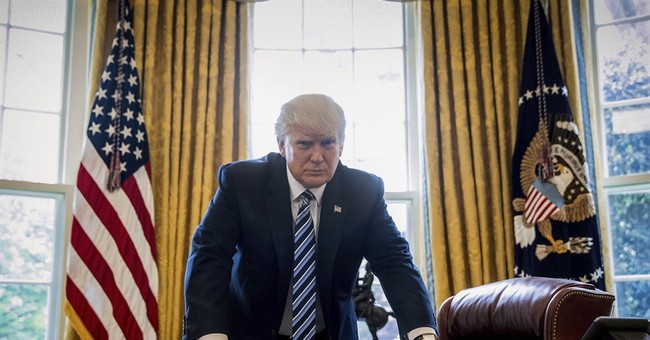 If you’re a conservative who judges Donald Trump on his performance in his first 100 days in office, you should be fairly happy. That doesn’t mean Trump has been perfect or that he should keep tweeting about everything that pops into his head, but he’s had a solid start to his presidency.

10) An Economic Confidence Boost: Trump is not responsible for every good thing that happens in our economy, just as he’s not responsible for every bad thing that happens. That being said, it’s hard to miss the fact that the American economy seems to be taking off in response to his election. Consumer confidence is at the highest level in 17 years. Over half a million jobs have been created in his first 3 months in office. Furthermore, the stock market rally since Trump has been elected has been the 2nd biggest since John F. Kennedy was in office. The fact that everyone realizes Trump has forgotten more about business than Barack Obama and Hillary Clinton combined ever knew is helping to get our economy going back in the right direction.

9) Imposing A Five Year Ban On Lobbying The Government By Former White House Officials And A Lifetime Ban On Lobbying For Foreign Governments By Former White House Officials: Our government is utterly and completely corrupt. We have members of Congress and White House staffers doing favors for businesses and picking up huge checks from those same companies as soon as they get out of office. When you see Barack Obama giving $400,000 speeches to the same Wall Street fat cats he railed against incessantly as President, your first thought should be, “I wonder what he did for them that merited the $400,000 payback?” Trump’s reforms ARE NOT going to fix all these problems, but they are a step in the right direction.

8) Trump’s Pro-Life Surge: A lot of conservatives were skeptical of what seemed to be a convenient pro-life shift for Trump, but so far, he seems to be living up to the hype. He repealed the Obama mandate that forced states to fund Planned Parenthood and he reinstated the Mexico City Policy, which keeps American tax dollars from going to International NGOs that promote abortion. With those moves, Trump saved the lives of millions of children.

7) Trump Signing An Executive Order Directing The Justice Department To Cut Funding To Sanctuary Cities: The idea of living under the “Rule of Law” is incompatible with certain American cities allowing illegal aliens to break the law with impunity. A liberal judge is stopping his order from being carried out at the moment, but it seems likely that Trump will win in the Supreme Court. It’s good to see Trump taking steps to keep American citizens from being raped, robbed and murdered by illegal aliens who shouldn’t be in this country in the first place.

6) Trump Signing An Executive Order Withdrawing From the Transpacific Partnership Trade Deal: Even as a free trader, I have been ADAMANTLY opposed to the TPP because it was a terrible threat to our nation’s sovereignty. As our current Attorney General, Jeff Sessions, said while he was in the Senate, "I think for President Obama, I do believe the driving force behind this is a belief that this is some sort of a one unified governmental structure. It creates judicial bodies. The language of it confirms what I’ve been saying...It’s really breathtaking and it’s an erosion of sovereignty...particularly an erosion of congressional power.” That’s why it was so important that Trump killed the TPP. In a world where unelected American bureaucrats have too much control over our lives, the last thing we need to do is give unelected foreign bureaucrats a say in how we run our country.

5) Deft Foreign Policy Moves: Not only did Trump wring trade concessions out of the Chinese, he convinced them to give us at least some help with North Korea. Almost no one seemed to think that was possible before Trump pulled it off. Furthermore, Trump’s decision to missile strike a Syrian Air Base after a chemical weapons attack and drop the Mother of All Bombs on ISIS sent a strong message. Our friends know the United States is back and now our enemies understand that Trump is unpredictable, lethal and will not hesitate to end them.

4) Approving The Keystone And Dakota Access Pipelines: If you care about what Americans are paying for gas, you have got to be happy about Trump moving forward on the Keystone and Dakota Access Pipelines. As an extra added bonus, this work will temporarily create as many as 28,000 new jobs. The era of America being held hostage by environmental luddites who oppose all economic progress seems to be over.

3) A Drop-Off In Illegal Immigration: Trump has added more ICE agents, ended the illegal immigrant advocacy program at the DOJ and most importantly, has made it clear that there’s no longer a welcome mat for illegal aliens in the United States. As a result, the number of illegals crossing into the United States has dropped 72%. The fewer illegal immigrants in America, the better and Trump’s off to a good start.

2) Hillary Not Being President: There’s a lot to be said for avoiding the misrule of a corrupt, incompetent, malevolent monster like Hillary who considers everyone to her right to be her enemy. Having Hillary as President now would be one step removed from being ruled by an enemy state. Maybe that’s why despite all the complaints about Trump from the Left, polling shows Hillary would lose again if she went head-to-head with Trump.

1) Judge Gorsuch: Instead of Merrick Garland or who even knows, Supreme Court Justice Loretta Lynch with Hillary in the White House, Trump appointed Neil Gorsuch. Gorsuch is an originalist judge with a long track record who is highly regarded by conservative groups that review judges. When you consider that both Ted Cruz and Charles Grassley have said they expect another SCOTUS retirement this summer, the Supreme Court may be about to get an upgrade thanks to Trump.