John Hawkins
|
Posted: Feb 18, 2017 12:01 AM
Share   Tweet
The opinions expressed by columnists are their own and do not necessarily represent the views of Townhall.com. 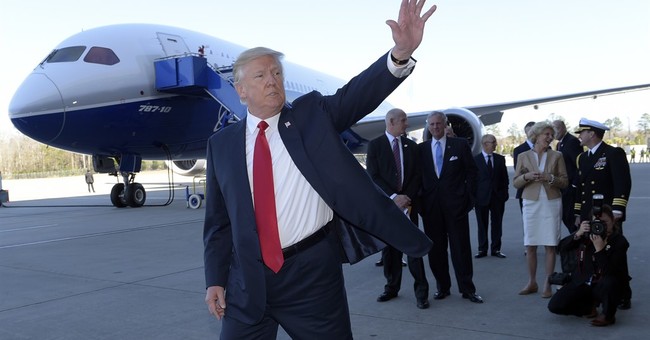 Despite all the hysteria you’re seeing from the Left, the mainstream media and from some Republicans who still at this late date can’t get over the fact that he won the primaries, Trump has actually had a dynamite first month in office. Trump may not fare so well if you judge him on his tweeting habits or his willingness to play nice with the media, but the agenda he’s pursued has been a conservative dream.

While I’m sure you’ve heard plenty of stories based on anonymous leaks and wild speculation, how many people have taken stock of what Trump’s actually been doing? Not what he’s tweeting, not what he might do some day, but what he’s actually done. There may be a lot more that needs doing, but if you’re a conservative, the proper reaction to his agenda is “so far, so good.”

10) Freezing all Federal Hiring Outside of the Military: Trump followed in Ronald Reagan’s footsteps by putting a federal hiring freeze in place almost immediately after he became president. That’s big, because the first step to shrinking government is to stop adding more people to it.

9) Pulling Support for the Obama Drive to Force Women to Allow Men in Their Bathrooms: This was a bit surprising, because Trump has generally been supportive of allowing transgender women to use women’s bathrooms, but he also said he believes the issue should be left to the states. Towards that end, he ordered the DOJ to “withdraw a motion filed by former President Barack Obama seeking to allow transgender students in public schools to use the restroom with which they identify.” That will probably lead to the issue being left to the states, which is how it should be.

8) Reinstating The Mexico City Policy: Barring U.S. government funding to international non-governmental agencies that promote or perform abortions is a big deal for pro-lifers. Because of Trump, your tax dollars are no longer going to be used to murder children overseas.

7) Ordered Federal Agencies To Cut Two Regulations For Every New One They Propose: Not only will this lead to fewer regulations, Trump has also decreed that the net cost of any new regulation that is added after cutting the old regulations should be zero. In other words, the regulatory burden on the American people can only go in one direction: down. If you want to help the economy, one of the best ways to do it is to stop strangling American businesses with red tape. Trump understands that.

6) Putting Out An Executive Order Asking The DOJ And Homeland Security to Withhold “Federal Funds, Except As Mandated By Law” From Sanctuary Cities: Trump talked a lot about sanctuary cities on the campaign trail and it’s great to see him taking action against these lawless cities. The fewer sanctuary cities we have, the fewer Americans like Kate Steinle will be raped, robbed or murdered as a result. There is no such thing as the “rule of law” when a protected class of foreign trespassers don’t live under the same laws as the rest of us.

5) Approving The Dakota Access Pipeline And The Keystone Pipeline: Not only will both those pipelines produce jobs without harming the environment, over the long haul they’ll help reduce gas prices. Liberals may not care about Americans spending less on gas, but it’s great that Trump does.

4) Killing The Trans-Pacific Partnership Trade Deal: As Jeff Sessions has noted, the TPP was a bad agreement that dangerously eroded America sovereignty,

"The TPP is about a goal of creating a new global regulatory structure, what I have called a Pacific union, transferring power from individual Americans and power from Congress once more. Eroding Congress to an unaccountable, unelected international bureaucratic committee. In other words, we are empowering the Trans-Pacific Partnership countries to create really a new Congress of sorts, a group with delegates that goes and meets and decides important issues that can impact everyday life of Americans. So the American representative in this commission, which will operate in many ways like the UN, will not be answerable to voters anywhere."

For liberals, transferring American sovereignty to an unelected international group is a feature. It’s great that Trump sees it as a bug.

3) Undermining Obamacare: While there’s still lots of talk about how the GOP should repeal and replace Obamacare, Trump has already stuck a shiv in the heart of the program by ordering the government to “exercise all authority and discretion available to them” to delay the law and grant exemptions. There are still legal questions to be answered about the long term impact of this executive order, but as a practical matter, it appears to have already done away with the IRS enforcing a penalty on people who don’t have healthcare. Technically, the law is still on the books, but if you no longer have to report to the IRS whether you have health insurance or not, that makes it nearly impossible for  it to be enforced. Obamacare is already in a death spiral and this executive order will speed things along.

2) Ordering The Construction Of The Border Wall: If you had to pick a central promise of Trump’s campaign, it was building a border wall. He’s already ordered construction to begin and as an extra added bonus, he signed an executive order increasing the number of border patrol agents and staffers for deportations. Of course ultimately, Trump will be judged on getting the wall finished, but you have to start somewhere and it’s good to see him taking that big first step right out of the gate.

1) Selecting Neil Gorsuch For The Supreme Court: Gorsuch is an eminently qualified 49 year old originalist and if conservatives were fantasy league picking their top five selections for the court, he’d be on it. Trump did his job; now it’s up to Mitch McConnell to get Gorsuch confirmed via hook, crook or nuclear option.