25 Reasons Not to Vote for Hillary Clinton

John Hawkins
|
Posted: Aug 06, 2016 12:01 AM
Share   Tweet
The opinions expressed by columnists are their own and do not necessarily represent the views of Townhall.com. 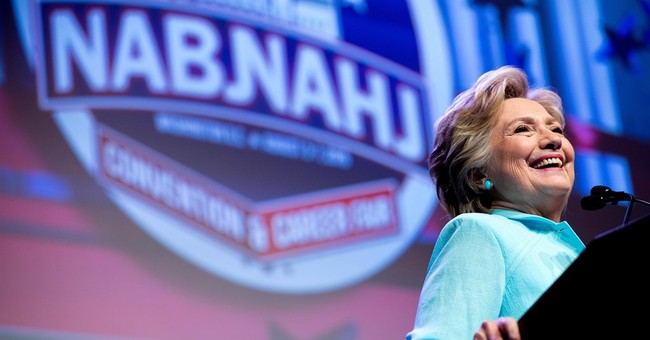 Note: Given Hillary Clinton’s disgusting and corrupt track record, this could easily have been a much bigger list. In fact, I’m not even sure you could adequately cover how unfit Hillary is for the Presidency in a 200 page book, much less a column. With that in mind, I decided to keep this list at 25 items to make it more easily digestible.

1) Hillary Clinton is almost 69 years old; she had a serious head injury after passing out in 2012 and she’s had a much remarked upon uncontrollable cough throughout much of this year’s campaign. The presidency is an enormously demanding job that visibly ages the person in the Oval Office. If someone who simply isn’t well enough to be President becomes the leader of the Free World, it could lead to devastating consequences as she futilely struggles to do the job.

2) If you really want a telling indication of what type of person Hillary Clinton is when she’s not lying or coughing in public, know that Secret Service agents considered being tasked with guarding her to be a form of punishment.

3) “Hillary demanded White House workers never speak to her and hide behind the drapes when she appeared.” You think someone like that cares about you? At all?

4) Hillary is so mentally unstable that she believes she had discussions with Eleanor Roosevelt and Mahatma Gandhi.

6) When she was practicing law, Hillary Clinton defended a man who raped a 12 year old girl. She tore the little girl apart on the stand, got the rapist off with a light sentence and later laughed about it with a reporter.

7) When her husband was governor, she took a $100,000 bribe that was paid to her via shifty dealings in the cattle futures market.

8) Under Hillary Clinton, the State Department did favors for a number of nations that either paid Bill Clinton ENORMOUS sums to do speeches or gave large gifts to the Clinton Foundation. That’s unethical on its face and it seems likely that the Clintons were receiving outright bribes, but as was mentioned earlier in reference to her email scandal, Hillary Clinton seems to be above the law.

9) Considering the sometimes shady dealings the Clintons have had with foreign governments, Bill’s inability to keep his pants up around willing women and the fact that Hillary Clinton’s private email server appears to have been hacked, she will be uniquely vulnerable to blackmail by other nations.

10) This is a woman who has publicly declared that Republicans are her enemies. With someone like that in the White House, there can be nothing other than hatred, gridlock and vicious political infighting from the first day she takes office until the day she leaves.

11) Some people may not like Republicans or Bernie Sanders fans chanting “Lock her up,” but Hillary Clinton didn’t just lie over and over to the American people about her email server; she broke the law and deserves to go to jail. When you take someone who is the living personification of “Important people are above the law” and make her President, what message does it send to the rest of the country? How should we trust a woman who doesn’t even deserve to have a security clearance with the Presidency? Why should anyone else follow the laws when Hillary Clinton gets to skate?

12) She claimed multiple times that she had to run for her life because her plane landed under SNIPER FIRE in Bosnia. Actually, when she landed there was a greeting ceremony and an 8 year old girl read her a poem.

14) What message would it send to young women if someone as corrupt, dishonest and incompetent as Hillary Clinton were elected President? That morals don’t matter? That you should hang in there with a husband who’s banging everyone in town but you because it may benefit you? That you should be handed everything in life despite your lack of qualifications or aptitude because you’re a woman who married the right man? Hillary is a loathsome human being and no parents should want her as a role model for their daughter.

15) Hillary Clinton is habitually hostile to business, successful people or wealthy Americans who aren’t giving her money. She’s practically guaranteed to tank the economy and make it even worse than it is today. This is a woman who has said, “Don’t let anybody tell you that it’s corporations and businesses that create jobs," and “I can’t worry about every undercapitalized business” in reference to the Nationalized Health Care Bill she supported killing small companies. She’s also said, “You know, we can’t keep talking about our dependence on foreign oil and the need to deal with global warming and the challenge that it poses to our climate and to God’s creation and just let business as usual go on, and that means something has to be taken away from some people.” Then there was the time she said, “Many of you are well enough off that the tax cuts may have helped you. We’re saying that for America to get back on track, we’re probably going to cut that short and not give it to you. We’re going to take things away from you on behalf of the common good.” You should start saving money now because if Hillary becomes President, it’s only a matter of time until the economy goes in the toilet.

16) Hillary Clinton helped create the Iranian nuclear deal that is allowing a terrorist-supporting, anti-American nation to get nuclear weapons despite the fact that we are a nation it’s most likely to use them on and the fact that it will create a new nuclear arms race in the Middle East.

17) She is planning to expand on Obama’s unconstitutional waving of immigration law for young illegal immigrants. She wants to reward illegal immigrants for breaking the law with American citizenship; she’s essentially calling for an end to deportation for anyone other than violent criminals and she doesn’t plan to improve our completely ineffective border security because she says the border is already secure. In addition to all of that, Clinton is also promising an amnesty bill within her first 100 days in office.

18) When she was Secretary of State, there were more than 600 requests for additional security in Benghazi. Those requests were mostly ignored and 4 Americans are dead because of it.

19) Despite the strong likelihood that ISIS will be able to slip agents into the Syrian refugees Obama is taking in and the fact that somewhere around 90% of them will end up on government assistance, Hillary Clinton supports bringing them here and wants to increase their numbers by 500%.

20) Despite the fact that America is deep in debt, running a deficit and may be less than a decade away from being unable to pay out Social Security or Medicare benefits that have been promised to seniors, Hillary Clinton is proposing 3.5 trillion dollars in new spending along with a 1.3 trillion dollar tax cut.

21) After the death of the late Antonin Scalia, Hillary would have the opportunity to shift the court to the Left for a generation by choosing his replacement. Incidentally, it’s unlikely that would be Hillary’s last selection in that Stephen Breyer is 77, Anthony Kennedy is 80 and Ruth Bader Ginsburg is 83.

22) Her judgment on foreign policy is terrible. Not only did she get people killed in Benghazi, she supported our intervention in Syria which has blown up in our faces and the overthrow of Gaddafi in Libya which led to radical Islamists taking over the country.

23) “I have to admit that a good deal of what my husband and I have learned (about Islam) has come from my daughter. (As) some of you who are our friends know, she took a course last year in Islamic history.” – Hillary Clinton | Let’s put the person who said that in charge of protecting us from Al-Qaeda, the war on Al-Qaeda and the rapidly deteriorating situation in the Middle East. That makes perfect sense, right?

24) Like most Democrats, Hillary realizes she can’t push an outright ban of handguns. So, she promotes extreme backdoor methods of gun control. She has called for a 25% sales tax on guns along with controversial new regulations that could make it difficult for many poor or lower middle class Americans to buy guns at all. She’s also pushing the insane idea that gun makers and sellers should be held liable if they sell a gun that’s later used in a crime. If this bizarre idea were to ever come to fruition, every gun dealer and arms manufacturer in America would be sued out of business when criminals inevitably use their products in the commission of a crime. Can you imagine applying this standard to any other product? How about letting people sue GM or Ford if a car is used in a crime? What about suing Nike if a criminal is wearing its shoes when he breaks the law?