In Honor of His 103rd Birthday, Here Are The 20 Best Quotes From The Late, Great Milton Friedman 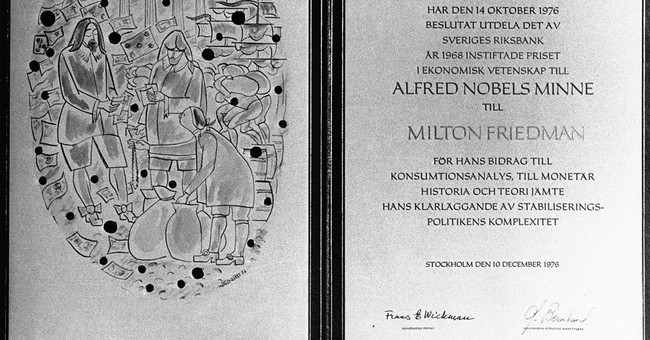 Yesterday would have been the 103rd birthday of Milton Friedman, who was one of the most brilliant economists of the last century. In honor of Friedman, here are his 20 best quotes.

19) “Because we live in a largely free society, we tend to forget how limited is the span of time and the part of the globe for which there has ever been anything like political freedom: the typical state of mankind is tyranny, servitude, and misery. The nineteenth century and early twentieth century in the Western world stand out as striking exceptions to the general trend of historical development. Political freedom in this instance clearly came along with the free market and the development of capitalist institutions. So also did political freedom in the golden age of Greece and in the early days of the Roman era.”

18) “It is one thing to have free immigration to jobs. It is another thing to have free immigration to welfare. And you cannot have both. If you have a welfare state, if you have a state in which every resident is promised a certain minimal level of income, or a minimum level of subsistence, regardless of whether he works or not, produces it or not. Then it really is an impossible thing.”

17) “So that the record of history is absolutely crystal clear. That there is no alternative way, so far discovered, of improving the lot of the ordinary people that can hold a candle to the productive activities that are unleashed by a free enterprise system.”

16) "When everybody owns something, nobody owns it, and nobody has a direct interest in maintaining or improving its condition. That is why buildings in the Soviet Union - like public housing in the United States - look decrepit within a year or two of their construction…"

15) "The great danger to the consumer is the monopoly - whether private or governmental. His most effective protection is free competition at home and free trade throughout the world. The consumer is protected from being exploited by one seller by the existence of another seller from whom he can buy and who is eager to sell to him. Alternative sources of supply protect the consumer far more effectively than all the Ralph Naders of the world."

14) "Two major arguments are offered for introducing socialized medicine in the United States: first, that medical costs are beyond the means of most Americans; second that socialization will somehow reduce costs. The second can be dismissed out of hand -- at least until someone can find some example of an activity that is conducted more economically by the government than private enterprise. As to the first, the people of the country must pay the costs one way or the other; the only question is whether they pay them directly on their own behalf, or indirectly through the mediation of government bureaucrats who will subtract a substantial slice for their own salaries and expenses."

13) "Nothing is so permanent as a temporary government program."

12) "The supporters of tariffs treat it as self-evident that the creation of jobs is a desirable end, in and of itself, regardless of what the persons employed do. That is clearly wrong. If all we want are jobs, we can create any number - for example, have people dig holes and then fill them up again, or perform other useless tasks. Work is sometimes its own reward. Mostly, however, it is the price we pay to get the things we want. Our real objective is not just jobs but productive jobs - jobs that will mean more goods and services to consume."

11) "I am in favor of cutting taxes under any circumstances and for any excuse, for any reason, whenever it's possible."

10) "There is all the difference in the world, however, between two kinds of assistance through government that seem superficially similar: first, 90 percent of us agreeing to impose taxes on ourselves in order to help the bottom 10 percent, and second, 80 percent voting to impose taxes on the top 10 percent to help the bottom 10 percent - William Graham Sumner's famous example of B and C decided what D shall do for A. The first may be wise or unwise, an effective or ineffective way to help the disadvantaged - but it is consistent with belief in both equality of opportunity and liberty. The second seeks equality of outcome and is entirely antithetical to liberty."

9) "When the United States was formed in 1776, it took 19 people on the farm to produce enough food for 20 people. So most of the people had to spend their time and efforts on growing food. Today, it's down to 1% or 2% to produce that food. Now just consider the vast amount of supposed unemployment that was produced by that. But there wasn't really any unemployment produced. What happened was that people who had formerly been tied up working in agriculture were freed by technological developments and improvements to do something else. That enabled us to have a better standard of living and a more extensive range of products."

8) "I want people to take thought about their condition and to recognize that the maintenance of a free society is a very difficult and complicated thing and it requires a self-denying ordinance of the most extreme kind. It requires a willingness to put up with temporary evils on the basis of the subtle and sophisticated understanding that if you step in to do something about them you not only may make them worse, you will spread your tentacles and get bad results elsewhere."

5) "Workers paying taxes today can derive no assurance from trust funds that they will receive benefits from when they retire. Any assurance derives solely from the willingness of future taxpayers to impose taxes on themselves to pay for benefits that present taxpayers are promising themselves. This one sided 'compact between the generations,’ foisted on generations that cannot give their consent, is a very different thing from a 'trust fund.' It is more like a chain letter."

3) "Indeed, a major source of objection to a free economy is precisely that it... gives people what they want instead of what a particular group thinks they ought to want. Underlying most arguments against the free market is a lack of belief in freedom itself."

2) "If you put the federal government in charge of the Sahara Desert, in 5 years there'd be a shortage of sand."