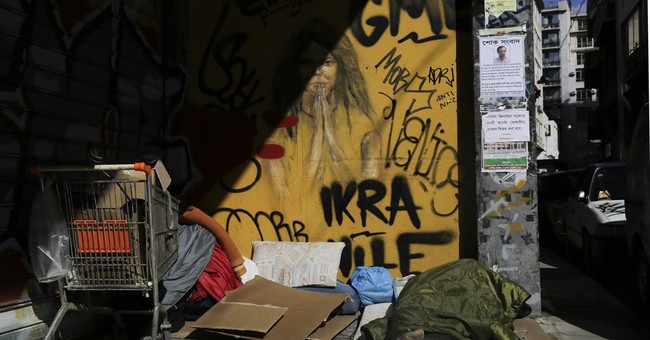 When liberals look at the poor, first and foremost, they see people who will vote for them in exchange for goodies. This gives liberals a perverse incentive to keep as many Americans mired in poverty as humanly possible.

This is why liberals are always willing to make a government handout a little bigger, easier to qualify for, or to make sure as many people as possible are using it. They want poor people to remain poor – and no wonder. Show me a ghetto in America and I will show you an area that votes heavily Democrat despite the fact that its condition never seems to improve.

Incidentally, that’s just how liberals like it. If you’re poor today, they’d like you to remain poor next year, the next ten years or even for the rest of your life. Then, not only do liberals get your vote, they get to feel better about themselves because they’re “helping” a “pitiful, helpless failure” like you. It’s the best of all worlds for liberals: they get to feel “generous,” it helps keep them in power, and other people pick up the bill.

Of course, it’s certainly not the best of all worlds for the poor.

Having been poor, I can tell you that it’s no picnic. Nobody likes living in a dangerous neighborhood, struggling to pay the rent or not knowing where the money will come from if his car breaks down. This is where liberals try get the fishhook in your jaw. They offer “free” money, “free food,” “free” housing. When you’re struggling, that looks pretty good.

But, what many poor people eventually realize is that all the “free” things liberals want to give them are part of a trap. Sure, government benefits make life a little easier, but they also help keep you poor long term. Being on the dole undercuts your motivation to change your situation. It encourages you to treat receiving handouts from the government as a primary source of income. In fact, many people start to worry that if they do TOO WELL, they’ll lose their “free” benefits.

On the other hand, conservatives don’t believe anyone is destined to remain poor.

We believe if you make good decisions, work hard and are willing to pull yourself up by your own bootstraps, you can at least join the middle class. Unlike the Democrats, Republicans get most of their votes from the middle class; so unlike them, we’re incentivized to help poor Americans improve their situation financially. The same poor person who won’t vote Republican today may vote for the GOP tomorrow if he is off the dole, has a better job and is living in a better neighborhood.

So conservatives do believe in a social safety net, but we believe it should be temporary. We don’t want anyone to become dependent on the government or to take advantage of the system. In other words, we don’t want the safety net to become a hammock.

That’s why we want people to work for welfare, think drug addicts should be ineligible and believe there should be limits to how long someone can stay on a program.

We agree with Ronald Reagan who once said, "I believe the best social program is a job."

Want to know why conservatives oppose high corporate taxes and want to keep taxes low in general? Why we don’t like the minimum wage? Why we try to cut regulations as much as possible?

It’s mostly about jobs. If the economy is growing, thriving and creating lots of jobs, it helps everybody, including the poor. Increasing the minimum wage to $15 may help a few people live more comfortably in poverty, but it will also lead to the loss of starter jobs for millions of poor people who desperately need the experience so they can improve their situations.


The government will NEVER lift you out of poverty, but a good job can. That’s where we believe we should be focusing our efforts. That’s why conservatives have long touted enterprise zones that allow businesses to have tax breaks in poor neighborhoods. The more businesses that move into low-income areas, the more poor Americans can get jobs.

Conservatives also believe in being tough on crime and protecting the Second Amendment rights of Americans. Nobody benefits more from that than the poor who are often trapped in crime-ridden neighborhoods that Democrats haven’t bothered to clean up, despite being in charge for decades.

Conservatives don’t believe there’s anything shameful about being poor, but we also believe the best thing we can do to help poor Americans is to make it possible for them leave poverty behind for good. A liberal “success story” is someone who gets lots of government benefits while he lives in poverty for decades. A conservative “success story” is a poor American who no longer needs government benefits because he got a good job and moved into the middle class.