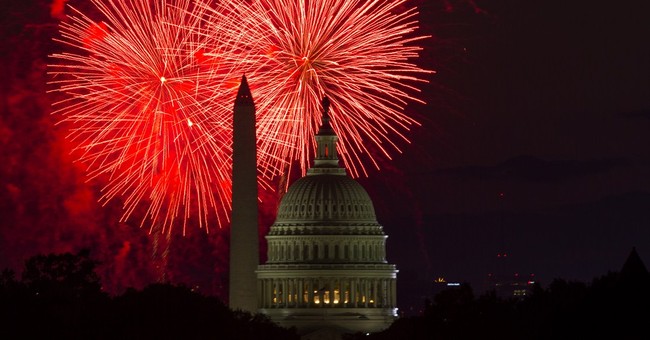 1) No one will really understand politics until they understand that politicians are not trying to solve our problems. They are trying to solve their own problems — of which getting elected and re-elected are number one and number two. Whatever is number three is far behind. — Thomas Sowell

2) We tolerate, even promote, many things we once regarded as evil, wrong, or immoral. And then we seek “explanations” for an act that seems beyond comprehension. Remove societal restraints on some evils and one can expect the demons to be freed to conduct other evil acts. —Cal Thomas

3) What would you think of a person who earned $24,000 a year but spent $35,000? Suppose on top of that, he was already $170,000 in debt. You’d tell him to get his act together — stop spending so much or he’d destroy his family, impoverish his kids and wreck their future. Of course, no individual could live so irresponsibly for long. But tack on eight more zeroes to that budget and you have the checkbook for our out-of-control, big-spending federal government. —John Stossel

4) As my father-in-law once said, when they talk about taxes it’s always for teachers, firemen, and police – but when they spend your taxes, it always seems to go to some guy in a leather chair downtown you never heard of. —Glenn Reynolds

5) America’s abundance was created not by public sacrifices to “the common good,” but by the productive genius of free men who pursued their own personal interests and the making of their own private fortunes. They did not starve the people to pay for America’s industrialization. They gave the people better jobs, higher wages and cheaper goods with every new machine they invented, with every scientific discovery or technological advance–and thus the whole country was moving forward and profiting, not suffering, every step of the way. — Ayn Rand

6) If there is no moral foundation for a system of laws, then the law is reduced to “These are the rules. They’re the rules because I say so, and I control all of the guys with guns.” We can ask those who survived Pol Pot, Stalin, or Mao how that worked out…

So the law is either codification of morality or it is thuggery. The real argument is about which moral code will be implemented by the law. To claim to reject a moral underpinning for the law is either a wish to live in a place where the law is whatever one guy says it is today, or else it is a disingenuous attempt to substitute your own moral code for the one that has already been codified. —Beregond

7) A rising tide (in the economy) lifts all boats. — John Kennedy

8) I am for doing good to the poor, but I differ in opinion of the means. I think the best way of doing good to the poor, is not making them easy in poverty, but leading or driving them out of it. In my youth I travelled much, and I observed in different countries, that the more public provisions were made for the poor, the less they provided for themselves, and of course became poorer. And, on the contrary, the less was done for them, the more they did for themselves, and became richer. —Ben Franklin

9) When everybody owns something, nobody owns it, and nobody has a direct interest in maintaining or improving its condition. That is why buildings in the Soviet Union — like public housing in the United States — look decrepit within a year or two of their construction… —Milton Friedman

10) Repeatedly asking for government help undermines the foundations of society by destroying initiative and responsibility. It is also a fatal blow to efficiency and corrupts the political process. When everyone gets something for nothing, soon no one will have anything, because no one will be producing anything. —Charles Koch

11) Right now, politicians have the power to suddenly decide to tax us all at 100% and then spend the money replacing all of our roads with a high-speed rail system. What keeps them from doing that? Common sense? Come on, look at the morons we have in government – Congress is filled with idiots who couldn’t run a lemonade stand and who have grand visions to transform the nation. No, the only thing stopping them is that they’re divided into two parties who viscerally hate each other. If they ever got along, a big new government overreach like the Patriot Act or a giant boondoggle like Obamacare would be passed every couple weeks. By the end of the year, we’d have the government spying on our every movement as we lived flat broke in shanty towns, eating our government-allotted corn cob half we’d get every other day. —Frank J. Fleming

12) Far from having the 21st-century equivalent of an Edwardian class system, the United States is characterized by a great deal of variation in income: More than half of all adult Americans will be at or near the poverty line at some point over the course of their lives; 73 percent will also find themselves in the top 20 percent, and 39 percent will make it into the top 5 percent for at least one year. Perhaps most remarkable, 12 percent of Americans will be in the top 1 percent for at least one year of their working lives. --Kevin Williamson

13) Yet the basic fact remains: every regulation represents a restriction of liberty, every regulation has a cost. That is why, like marriage (in the Prayer Book’s words), regulation should not “be enterprised, nor taken in hand, unadvisedly, lightly, or wantonly” —Margaret Thatcher

14) "The larger the percentage of the national income taken by taxes the greater the deterrent to private production and employment. When the total tax burden grows beyond a bearable size, the problem of devising taxes that will not discourage and disrupt production becomes insoluble." —Henry Hazlitt

15) Millions of individuals making their own decisions in the marketplace will always allocate resources better than any centralized government planning process. —Ronald Reagan

16) By government giveaway programs, individuals are often hurt far more than they are helped. The recipients of these programs become dependent on the government and their dignity is destroyed. Is it compassionate to enslave more and more people by making them a part of the government dependency cycle? I think compassion should be measured by how many people no longer need it. Helping people to become self-sufficient is much more compassionate than drugging them with the narcotic of welfare. —Rush Limbaugh

17) With regard to the idea of whether you have a right to health care, you have to realize what that implies. It’s not an abstraction. I’m a physician. That means you have a right to come to my house and conscript me. It means you believe in slavery. It means that you’re going to enslave not only me, but the janitor at my hospital, the person who cleans my office, the assistants who work in my office, the nurses. —Rand Paul

18) There used to be no income inequality in China because everyone was poor. This is a tradeoff you accept for growth and freedom. —Michele Caruso-Cabrera

19) Out of every hundred new ideas ninety-nine or more will probably be inferior to the traditional responses which they propose to replace. No one man, however brilliant or well-informed, can come in one lifetime to such fullness of understanding as to safely judge and dismiss the customs or institutions of his society, for those are the wisdom of generations after centuries of experiment in the laboratory of history. —Will and Ariel Durant

20) The total present value of payments expected under Social Security and Medicare beyond what is expected to be collected under current tax laws is about $100 trillion. One way to put that amount of money in context is to note that it is about twice the amount of all the net private assets that exist in America today. To answer cw’s question directly, the best back-of-envelope estimate is that meeting this unfunded portion of our Social Security and Medicare commitments would require roughly an immediate 80 percent increase in federal income taxes, sustained forever. –Jim Manzi

21) The real story is that our social safety net was supposed to be like one of those, “Take a Penny, Leave a Penny” tills that depend on the honor and neighborliness of a community. And we don’t have that community. What we have is a fragmented mess of givers and takers who are not the same people. —Daniel Greenfield

22) If a nation values anything more than freedom, it will lose its freedom; and the irony of it is that if it is comfort or money that it values more, it will lose that, too. — Somerset Maugham

23) Suppose I hire you to repair my computer. The job is worth $200 to me and doing the job is worth $200 to you. The transaction will occur because we have a meeting of the mind. Now suppose there’s the imposition of a 30 percent income tax on you. That means you won’t receive $200 but instead $140. You might say the heck with working for me – spending the day with your family is worth more than $140. You might then offer that you’ll do the job if I pay you $285. That way your after-tax earnings will be $200 – what the job was worth to you. There’s a problem. The repair job was worth $200 to me, not $285. So it’s my turn to say the heck with it. This simple example demonstrates that one effect of taxes is that of eliminating transactions, and hence jobs. — Walter Williams

24) Is there no virtue among us? If there be not, we are in a wretched situation. No theoretical checks-no form of government can render us secure. To suppose that any form of government will secure liberty or happiness without any virtue in the people, is a chimerical idea, if there be sufficient virtue and intelligence in the community, it will be exercised in the selection of these men. So that we do not depend on their virtue, or put confidence in our rulers, but in the people who are to choose them. -- James Madison

25) Freedom is messy. In free societies, people will fall through the cracks — drink too much, eat too much, buy unaffordable homes, fail to make prudent provision for health care, and much else. But the price of being relieved of all those tiresome choices by a benign paternal government is far too high. Big Government is the small option: it’s the guarantee of smaller freedom, smaller homes, smaller cars, smaller opportunities, smaller lives. – Mark Steyn